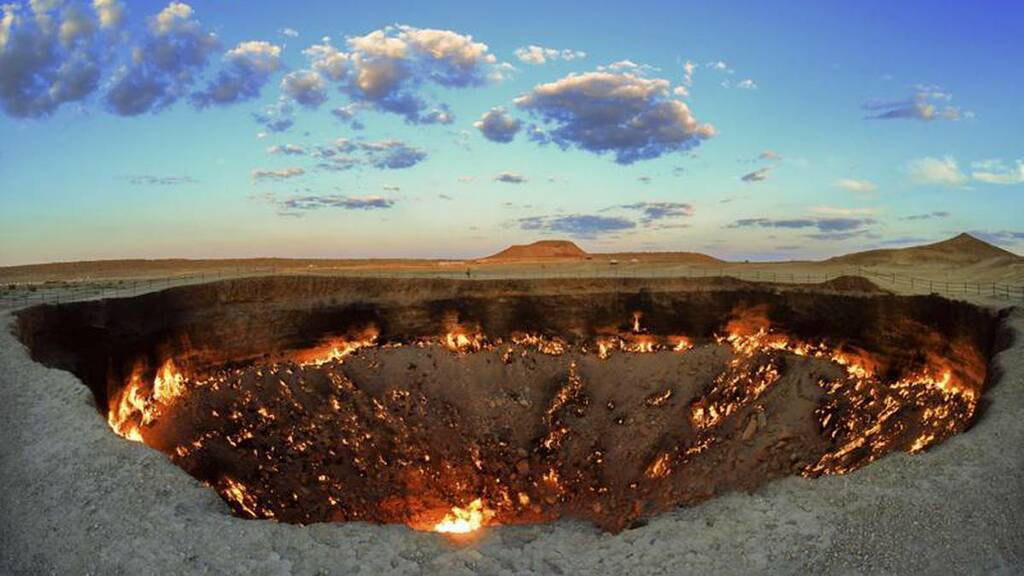 Turkmenistan's strongman president has ordered the "Gateway to Hell" to be closed as he demanded a giant desert crater that has been on fire for decades be extinguished.

President Gurbanguly Berdymukhamedov appeared on state television Saturday telling officials to put out the flames at the Darvaza natural gas crater in the middle of the vast Karakum desert to save valuable natural resources.

Details of its origins are sketchy, but according to local Turkmen geologists, the crater was created in 1971 during a Soviet drilling accident that hit a gas cavern, causing the drilling rig to fall in and the earth to collapse underneath it.

To prevent the dangerous fumes from spreading, the Soviets decided to burn off the gas by setting it on fire.

The pit, which is located about 260km north of the capital, Ashgabat, has been ablaze ever since and previous attempts to put it out have been unsuccessful.

The crater is 70m wide and 20m deep, and has become a popular site for the small number of tourists who come to the ex-Soviet country.

The fire's status was given a boost when state TV showed President Gurbanguly Berdymukhamedov speeding around it in an off-road truck in 2019.

But Berdymukhamedov on Saturday said the man-made crater "negatively affects both the environment and the health of the people living nearby".

"We are losing valuable natural resources for which we could get significant profits and use them for improving the wellbeing of our people," he said in televised remarks.

Berdymukhamedov instructed officials to "find a solution to extinguish the fire".

In November 2013 Canadian explorer George Kourounis launched an expedition to its fiery depths - the first ever person to do so - after a year of planning.

"The place has always fascinated me. The story behind how it came into existence has been sort of shrouded in mystery, and there's no other place like it on Earth," he told National Geographic. "There's a lot that we can learn about this place."

Kourounis even hired a stunt coordinator who usually works on Hollywood films to light himself on fire on numerous occasions to prepare him to keep calm in close proximity to the flames.

"When you first set eyes on the crater, it's like something out of a science fiction film," he said. "When you go out over, looking straight down, it's literally like another planet, almost."

When Kourounis reached the bottom he collected soil samples in an effort to learn whether life could survive in such hostile conditions elsewhere in the universe. He discovered no one actually knows its definitive origins.

Berdymukhamedov's stunt speeding around the fire in 2019 is not unusual. He is known for his eccentric approach to leadership, having previously dabbled as a DJ, author and equestrian.

Berdymukhamedov also made headlines when footage of him raising a hold bar during a cabinet meeting emerged before the country hosted the International Weightlifting Federation World Championship in 2020.

In 2018, the president officially renamed the crater the "Shining of Karakum".

Berdymukhamedov has ruled since 2007, although rights groups have raised concerns over his leadership.