By Hugo Lowell in Washington 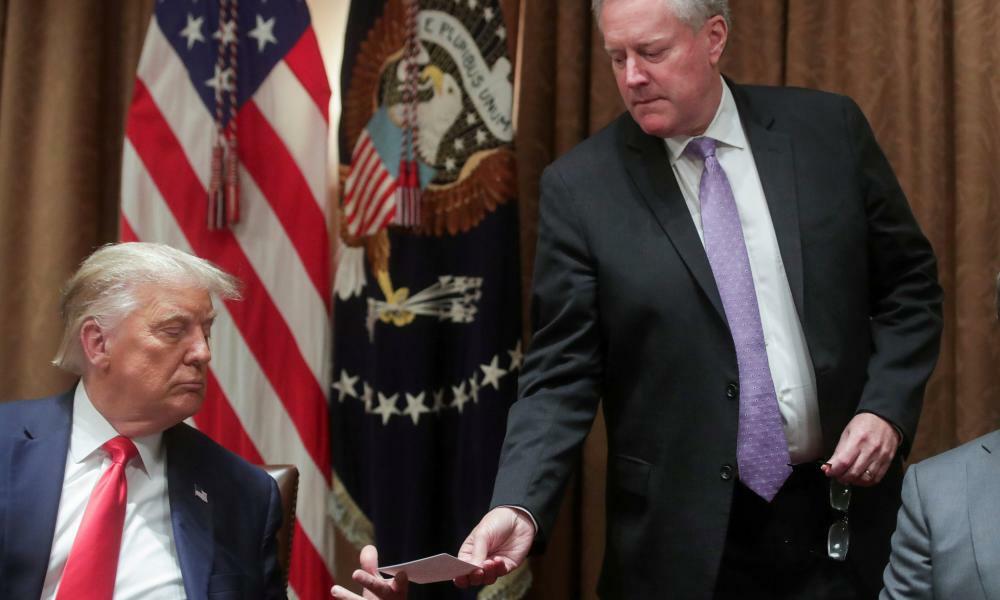 The House select committee investigating the 6 January attack on the Capitol has instructed telecom and social media companies in recent weeks to preserve records of Donald Trump’s White House chief of staff, Mark Meadows, according to a source familiar with the matter.

The move positions the select committee on the doorstep of the Oval Office as it pursues a far-reaching inquiry into whether Trump and his White House helped plan or had advance knowledge of the insurrection perpetrated by the former president’s supporters.

House select committee investigators signaled their intention to examine potential involvement by the Trump White House and House Republicans when they made a series of records demands and records preservation requests for Trump officials connected to the Capitol attack.

But the previously unreported inclusion of Meadows on the list of people whose records the select committee wants preserved suggests the panel will seek more information on the most senior aide in the Trump administration and could upturn every inch of the West Wing in its inquiry.

The former chief of staff is among several top White House officials who may hold the key to unlock inside information pertaining to the extent of the former president’s involvement in the Capitol attack that left five dead and nearly 140 injured.

Meadows remained at Trump’s side in the weeks before 6 January as well as on the day itself, as the White House strategized ways to overturn the results of the 2020 presidential election and ensure the then vice-president, Mike Pence, would not certify Joe Biden’s victory.

The White House chief of staff started the day of the insurrection with Trump in the Oval Office, before attending the “Save America” rally that preceded the Capitol attack, according to a Trump administration official familiar with his movements.

Meadows then accompanied Trump back to the White House with a coterie of aides and advisers, from where the former president told the Republican senator Ben Sasse that he was “delighted” at the images of his supporters and domestic violent extremists storming the Capitol in his name.

Such proximity to Trump and the chiefs of staff to two key Trump cabinet members closely connected to the Capitol attack suggests Meadows is likely to be a prime witness for the inquiry, insofar as he can shed light on Trump’s private thoughts as the violence unfolded.

The inclusion of Meadows on the list, alongside McCarthy and 10 other far-right House Republicans, nonetheless provides a clearer picture of the sharpening contours of the investigation and its overall direction as the select committee ramps up its work.

It also echoes congressional investigations of eras past: Richard Nixon’s White House chief of staff, HR Haldeman, came under scrutiny from the Senate select committee into the Watergate scandal and was forced to testify about the extent of Nixon’s involvement.

But it was not immediately clear which companies had received a records preservation request for Meadows from the select committee. Some telecom and social media companies – such as the online forum 8kun popular with QAnon conspiracy theorists – did not even receive a list of names, counsel for the forum said.

House select committee investigators are still in the evidence-gathering phase, but the committee is likely to schedule its second hearing before the end of the month, according to a source familiar with the matter.

The select committee said on Friday that investigators had received thousands of pages of documents, and that they understood the National Archives had started the process required by law for the review of presidential records.

Meadows’s communications, meanwhile, may be of interest to the select committee in other aspects of the inquiry into the origins of 6 January, an area that falls under the panel’s purview after it took charge of all congressional investigations into the Capitol attack.

The select committee subsumed several inquiries into the Trump administration’s efforts to subvert the 2020 election, including one by the House oversight committee that was examining how Meadows pressured the justice department to investigate baseless allegations of election fraud.

Top Republicans under scrutiny have embarked on a campaign of threats and intimidation in an attempt to thwart the inquiry.

The Republican House minority leader, McCarthy, two weeks ago lashed out at the select committee’s records preservation requests and warned that the GOP would retaliate against companies that complied when his party retakes the House majority.

McCarthy argued, without citing any specific law, that it would be illegal for telecom and social media companies to comply with the records requests – even though congressional investigators have obtained phone and communications records without issue in the past.