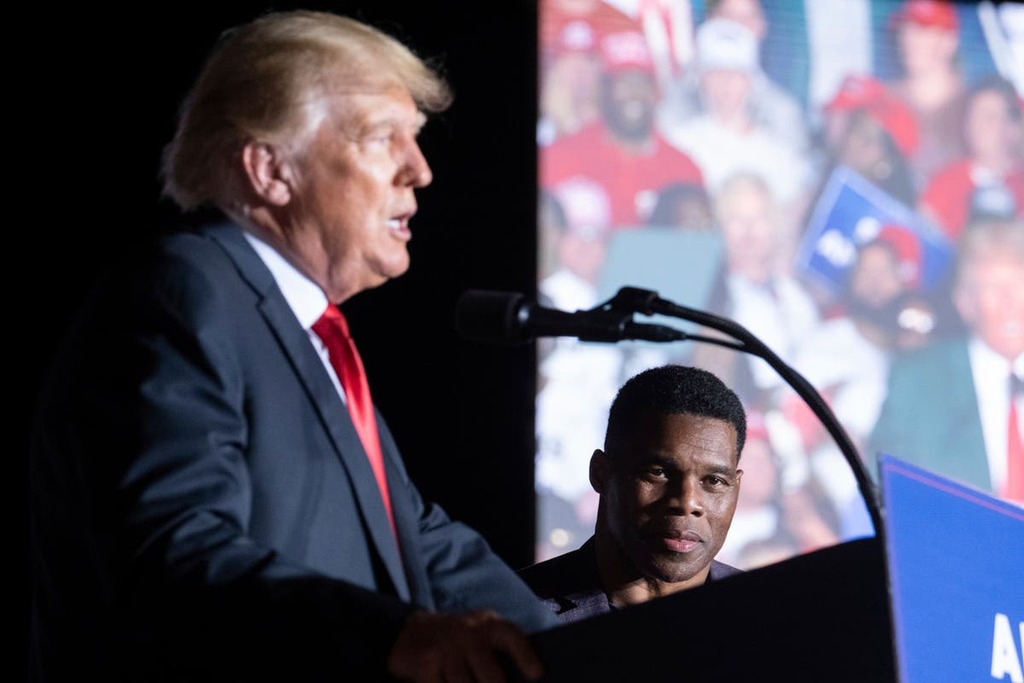 One has been accused of assaulting another White House aide. Another allegedly threatened his ex-wife’s life, exaggerated claims of financial success and alarmed business associates with his erratic behavior. A third has asked a judge to keep past protection-from-abuse orders sealed.

As former President Donald Trump wades into contested primaries across the country, he's trying to exact revenge and remake the Republican Party in his image. In doing so, he has endorsed a series of candidates involved in allegations of wrongdoing, especially concerning their treatment of women.

That's contributing to anxiety among some Republicans who worry that Trump is lending his powerful political backing only to those who flatter his ego. Such candidates may be able to win GOP primaries in which the party's Trump-supporting base dominates, only to struggle in the general election.

And with control of Congress hinging on just a few seats, such missteps could be costly.

“There is no vetting process — at least not on policy and electability," said Dan Eberhart, a GOP donor and Trump supporter who said the concerns extend to many corners of the party. “The endorsement process comes down to how much a candidate supports the former president and is willing to have the Trump machine run their campaign and fundraising. ... Whether they are the most viable candidate in a given race is secondary.”

The former president has little reason to be blindsided by the allegations facing some of the candidates he's endorsed. Some details would have turned up in basic background checks similar to those required by many employers. Others were said to have been shared with Trump personally or circulated within GOP circles well before he made his endorsements.

In her new book, “I’ll Take Your Questions Now: What I Saw at the Trump White House,” Stephanie Grisham the former White House press secretary and chief of staff to first lady Melania Trump accuses her ex-boyfriend of growing abusive as their relationship deteriorated. The ex-boyfriend, Max Miller, was a fellow White House aide and is now running for Congress in Ohio with Trump's enthusiastic blessing.

Miller has adamantly denied the charges and on Wednesday filed a defamation suit accusing Grisham of sullying his name.

Grisham says she told the former president and first lady before Miller announced his candidacy about the abuse but wrote in a Washington Post op-ed that they “didn’t seem to care.” Trump endorsed Miller as an act of revenge against Rep. Anthony Gonzalez, one of 10 House Republicans who voted to impeach him over the Jan. 6 insurrection.

“A White House staffer accused of assault by a woman whom the president knew and trusted? It didn’t even seem to register on the president’s radar screen as a concern. To the contrary, knowing what he knows, Trump has endorsed my ex’s bid for Congress,” she wrote.

Trump has a long history of siding with powerful men accused of hurting women, from his Supreme Court pick Brett Kavanaugh to former Fox News host Bill O’Reilly. He defended a former White House aide who resigned after allegations that he was physically and emotionally abusive to two ex-wives became public. And in 2017, he backed GOP Senate candidate Roy Moore despite allegations that Moore had sexually assaulted teen girls decades ago when he was in his 30s.

Trump himself has been accused of sexual misconduct by more than two dozen women but he, like the other men he has defended, has always vigorously denied the allegations.

Still, the former president and his associates occasionally draw the line.

Last week, Trump cut ties with his former campaign manager and longtime adviser Corey Lewandowski after a donor alleged Lewandowski made repeated unwanted sexual advances as a fundraising event. During the 2016 campaign, Trump had defended Lewandowski after he was accused of forcefully grabbing a reporter by the arm and faced a battery charge, which was dropped. Lewandowski denied wrongdoing in both cases.

But more often than not, an allegation of wrongdoing hasn't stopped the former president from offering his endorsement.

Trump last month threw his support behind football great Herschel Walker a longtime friend, for an open Senate seat in Georgia, a race the former president had urged Walker to enter. That endorsement came more than a month after an Associated Press review of hundreds of pages of public records tied to Walker’s business ventures and his divorce uncovered accusations that Walker repeatedly threatened to kill his ex-wife and her new boyfriend and exaggerated his business success, among other things.

Walker's campaign has generally avoided responding to specifics, but has cited the ex-NFL star's mental health issues, which he has discussed in detail, including in a book.

And in Pennsylvania, Trump's chosen candidate for an open Senate seat, Sean Parnell, has faced questions from rival Jeff Bartos over restraining orders sought by his wife in 2017 and 2018 during divorce proceedings. The Philadelphia Inquirer reported Wednesday that he had asked a judge “to ban his wife and her attorney from talking publicly about past protection-from-abuse orders against him.”

Parnell notes the orders are not evidence of wrongdoing. But Bartos has tried to make the issue a liability and warned it could damage Parnell in a general election, potentially costing Republicans the seat.

Trump spokesperson Taylor Budowich did not respond to specific questions about what Trump knew of the allegations, but defended the former president's choices and instead blamed journalists.

“President Trump continues to pick strong fighters who will advance his America First agenda," he said. “However, we are no strangers to the depths the fake news is willing to fall in order to smear honorable patriots with false allegations.”

But even some allies of the former president worry the haphazard nature of his endorsement process leaves him open to potential embarrassment and risks checkering an endorsement record he takes pride in. Some have advised that he be more judicious and endorse in fewer races, even as he basks in the attention showered on him by candidates jockeying for his seal of approval, still seen as a golden ticket in many districts where he remains the party's biggest star.

For candidates who seek Trump's backing, there's some degree of process.

Candidates can make contact with Trump's team via an email address that was set up to sift through incoming endorsement requests. Trump interviews the candidates personally, and aides check up on their past statements and try to determine whether they share his policy priorities, which have come to include their position on election audits and how vigorously they supported the baseless effort to overturn the 2020 results.

But there is no system in place that would, for instance, turn up arrest records for drunk driving or property tax liens. And, as always with Trump, decisions are often shaped by what he sees on TV, by gossip, and by those who have his ear at the time, including some who may be working for endorsement-seeking candidates.

Still, Trump allies note he generally has a good read on the GOP base. And even though someone like Walker may come with baggage, he also has sky-high name recognition, huge fundraising potential and is more likely to get Trump's help than someone who may look good on paper but that the former president isn't excited about.

“He’s going to be unpredictable. He wouldn’t want it any other way. That’s kind of his M.O., his brand, his DNA politically," said veteran Georgia GOP strategist Chip Lake.

But endorsing in so many races carries risks for Trump personally, Lake noted.