By Leyland Cecco in Toronto 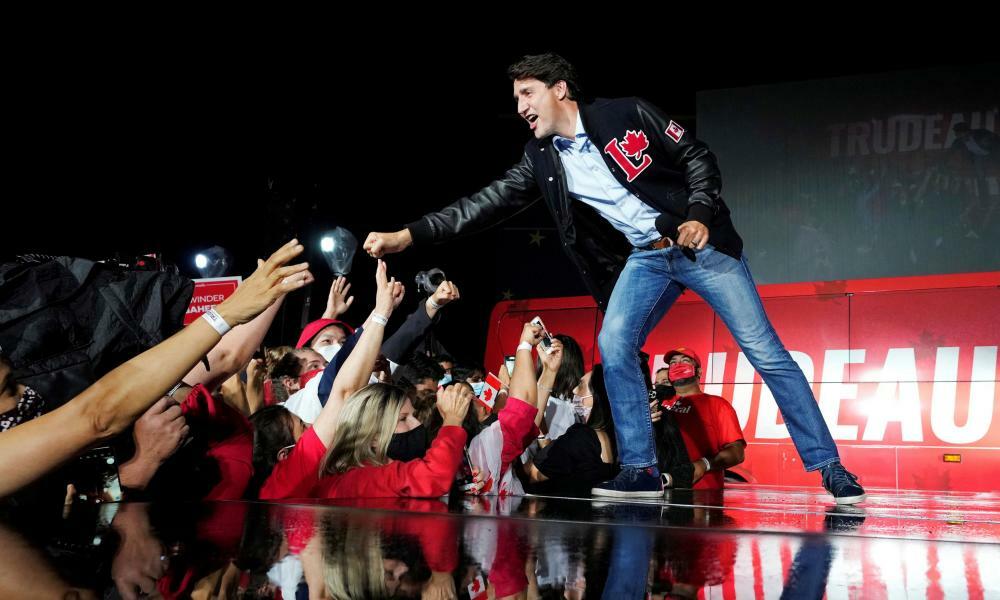 When he was pelted with a handful of gravel by anti-vaccine protesters last week, the Canadian prime minister, Justin Trudeau, joined an illustrious list of political leaders who have had things hurled at them by disgruntled citizens. His father, former prime minister Pierre Elliott Trudeau, had rocks (and tomatoes and eggs) thrown at his train car in the early 1980s.

But the gravel incident – which led to charges of assault with a weapon against the protester – has thrust the image of a prime minister on the defensive to the forefront of an election that, for many, is unwanted and has so far lacked a coherent theme.

Trudeau called the snap election in late August, prompting grumbling that the country would be casting ballots during the fourth wave of the coronavirus pandemic. He defended the move, saying that after weathering a deadly pandemic, Canadians should have a say in the country’s future.

“After making it through 17 months of nothing like we’ve ever experienced, Canadians deserve to choose what the next 17 months, what the next 17 years and beyond, will look like. And I know that we have the right plan, the right team and the proven leadership to meet that moment,” he said. “So to the other parties: please explain why you don’t think Canadians should have the choice? Why you don’t think that this is a pivotal moment?”

The initial response was a collapse in the polls for the incumbent prime minister, who is seeking his third term after six years in office.

Days before the country votes, numerous polls suggest that most Canadians don’t believe the election is necessary. And Trudeau now trails the Conservative leader, Erin O’Toole, a former air force navigator, by an average of nearly two points in national polls.

O’Toole, who has run a middle-road campaign with an emphasis on workers’ rights, has argued that Trudeau’s political ambitions in parliament – not the health of the country – are the reason Canadians are facing their second federal election in two years.

“Leadership is about putting others first, not yourself,” O’Toole said during the only English language debate.

Despite his stumble in the polls, however, Trudeau’s political fate isn’t necessarily tied to the horse-race nature of public opinion. Conservative support is strongest in areas, like Alberta and Saskatchewan, where fewer seats can be won. The Liberals, conversely, do well in seat-rich provinces like Ontario and Quebec. In 2019, for example, the Liberal party won 157 of parliament’s 338 seats, despite losing the popular vote to the Conservatives by 1.2%, or 220,449 votes. The Conservatives won only 121 seats.

And with the early days of the campaign playing out during the summer holidays, most voters have only recently started to pay attention to the blazingly short, 36-day campaign, giving Trudeau the chance to salvage his chances of a third win when Canadians go to the polls on 20 September.

In recent weeks, a wave of protests – some of which have forced the cancellation of the prime minister’s public events – have drawn attention to a virulent anti-vaccine movement, as well as growing influence of the far-right People’s party of Canada, whose supporters are fixtures of the protests.

Led by former Conservative cabinet minister Maxime Bernier (who himself was recently hit with an egg), the party has campaigned for years on an anti-immigrant, Islamophobic populist platform, with little electoral success.

But months of public lockdowns has given the party an opportunity to channel mounting frustrations – largely among male voters.

“[The People’s party] has taken this anti-vaccine, anti-lockdown, anti-mask platform and connected a more traditional, hard-right agenda. And that’s given them a lift in the polls that we haven’t really seen before,” said Andrew McDougall, a professor of political science at the University of Toronto. “Whether or not those supporting the People’s party will show up on election day is an open question. We don’t know what effect this party will have – people are still trying to make sense of it.”

The PPC still has low electoral prospects even in its best-case scenario, but it has nonetheless overtaken the Green party, which is mired in political infighting.

“O’Toole is likely wary that he may be losing votes on the edge to the People’s party. And that’s something he’s going to want to keep an eye on. But he’ll lose more votes if he decides to embrace the hard-right agenda.”

Sensing an opportunity to shift the narratives of the campaign, Trudeau has repeatedly attacked O’Toole’s refusal to embrace vaccine mandates as Covid-19 cases rise – and tried to link the Conservative leader to the anti-vaccine protests.

“Shame on you, Erin O’Toole,” Trudeau said after he was heckled by protesters. “You need to condemn those people, you need to correct them, you need to use your voice and actually add it to those of us who understand that vaccinations are the way through this pandemic.”

O’Toole has repeatedly condemned the protests, but has been dogged by questions from reporters about unvaccinated members of his own party. While the party has said it encourages vaccines, it has stopped short of supporting a mandate, instead suggesting the decision should be one of personal choice.

The protests have nonetheless given his campaign something that has been missing, said Aaron Wherry, a veteran political journalist at the CBC and author of Promise & Peril: Justin Trudeau in Power.

After an event was cancelled due to protests, Trudeau met with reporters later that night.

“He went in front of the media and he talked about the protests. And that was the first time it felt like he got some real energy.” said Wherry. “Up until then, it felt like he’d been grasping for an idea or a narrative in this campaign. This seemed like the first time he’d hit his stride.”

When Trudeau lost his parliamentary majority in 2019, party leaders gently pulled him back from the spotlight.

But the shooting down of a plane full of Iranian Canadians, national anti-pipeline protests and a global pandemic meant his retreat from the public eye was short-lived.

Two years later Trudeau finds himself in the same position as before the last election: facing accusations from progressive voters that his government hasn’t done enough on social issues and climate change and a vote that will probably be fought over social issues.

“He called an election because he wants a majority. And he knows exactly which ridings [electoral districts] he would have to flip in order to make that happen,” said Lori Turnbull, a professor of political science at Dalhousie University. “And so the national polls don’t necessarily mean a whole lot, as long as the seats add up to the way he wants.”

A weak result for the Liberals on 20 September, however, could upend the power brokering in parliament.

In 2019, Jagmeet Singh, leader of the leftwing New Democratic party, ruled out working with the Conservatives. This time round, he has expressed more openness to cutting deals with the current leader, O’Toole, who shares a focus on affordability and workers’ rights.

But Singh and Trudeau are more natural allies, and despite sparring in the most recent debate, are more closely aligned in their progressive policies.

A narrow win on 20 September – even if it means losing seats in parliament – could help Trudeau cement a legacy with Singh’s help, including the delivery of low-cost expanded childcare, a long-unfulfilled promise by the party that has finally rolled out, says Wherry.

Trudeau’s climate plans, despite coming under attack during the most recent debate, have won plaudits from economists – and from a former top Green party leader, who called them “bold and thoughtful”.

Before his election in 2015, Trudeau was able to convert fatigue with Conservative policies – and the hope of a new, fresh way of doing politics – into a surprise parliamentary majority. Soon after, the election of Donald Trump as president offered the perfect counterpoint to Trudeau’s image as a progressive leader.

But the forces that thrust him into the country’s highest office – his promises of change, his youthful appearance and his fame – could be working against him. All political leaders, especially incumbents, inevitably face voter fatigue.

“You’re not just going out and making promises and talking about how great things are going to be – you have to defend whatever has happened over the past six years,” said Wherry. “Inevitably, there’s just wear-and-tear. As much as the pandemic may have boosted and reset his image, you can’t resist gravity.”