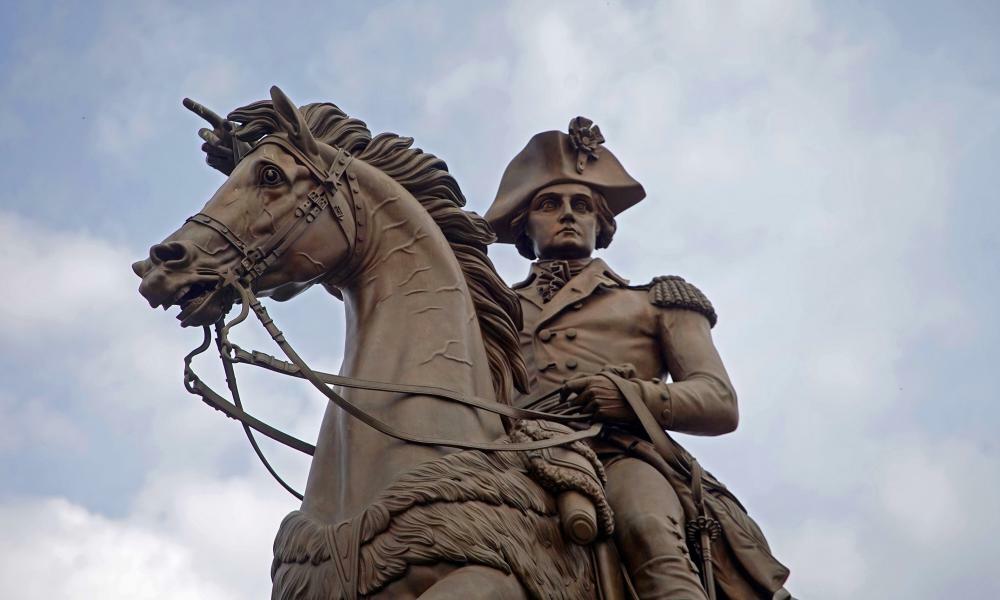 “George Washington slept here” used to be a common sign along the eastern seaboard, even giving rise to a film starring Jack Benny.

As Nathaniel Philbrick writes, it is no mere “historical joke”. Washington’s travels, which Philbrick follows, cemented the formation of the new nation and his role as president of a deeply divided country. They also hold lessons today, as America lies once again in the tight grip of division and disunity.

In autumn 1789, once Congress had recessed, Washington traveled first to New England, to Long Island to thank spies who had served in the revolution and to Rhode Island once it had ratified the constitution. His travels covered the country’s length, from Kittery, now in Maine, to Savannah, Georgia. He traveled with a small retinue (including enslaved staff), keenly conscious the trips should contrast with a royal progress of the Old World. Yet on entering a town, he often switched from his carriage to his majestic white charger – the very model of political authority, symbol of the new nation.

Enduring lengthy dinners and receptions, he greeted citizens along the roads and in taverns, explaining his policies and recalling the revolution that bound them together. Favourably impressed with the equality of people and houses in northern Connecticut, he asserted presidential authority to force the Massachusetts governor, John Hancock, to visit him first – and set a precedent.

Philbrick set out to retrace Washington’s footsteps, with his wife Melissa and Dora, their red Nova Scotia duck-tolling retriever, as his traveling companions. But he has not written a mere travelogue: running through the book is a strong current of concern not unlike that which Washington sought to address. Philbrick begins with a candid statement: “I like to probe the darkness at the edges of our nation’s history. Instead of the triumphs, I’m more interested in the struggle … I’m compelled to explore what happens to people in the worst of times, especially when it comes to issues of leadership.”

He is not afraid to show his cards: the country is in trouble.

“I can’t help but wonder whether our country will survive the next unexpected turn of events,” he writes. “More than ever before, Americans need to know what our first president did at the very beginning to bring this nation together.”

Washington’s most difficult travels, physically (1,800 miles over terrible roads) and morally were in the south in 1791. Already slavery had divided the young republic. Philbrick writes that “when it comes to Washington and slavery, nothing is clear cut”. The only founder to free some slaves at his death nevertheless pursued the runaway Ona Judge for years.

“We have come to the cold pocket of horror within George Washington,” Philbrick writes. “[Slavery] must temper acknowledgement” of his work.

Studying how deeply northern states like Rhode Island were connected to slavery, Philbrick concludes that a “monster is singular and slayable. What haunts America is more pervasive, more stubborn and often invisible. It is the legacy of slavery, and it is everywhere.”

Washington sought to use the powers of the presidency carefully, to unite people but also to challenge them. In 1794, he pushed Congress to accept a petition on slavery and thus, however tentatively, “put the weight of the presidency behind the issue”. Congress enacted a first, partial ban of the slave trade.

Slavery and modern struggles to address its impact demonstrate a broader point about history’s contemporary relevance. As Philbrick writes, “History doesn’t sit still, frozen on its pedestal like a statue. It’s ongoing. It’s dynamic. It keeps breaking ice. Today the metaphorical ice seems to be breaking all around us.”

Yet as Americans wonder if anything is worth preserving, as the past “will inevitably fail to meet the evolving standards of the present”, Philbrick recalls Americans to that past: “If our country is ever going to improve in the future, we need to look the past full in the face today, and there at the very beginning” stands Washington, with all his faults but also encouraging unity by his example.

Washington worried about a future president who focused on dividing the country rather than uniting it, “agitates the community with ill-founded jealousies and false alarms, kindles the animosity of one part against another, foments occasionally riot and insurrection”. He offered wise counsel: “When matters get to such lengths … a middle course would be found the best.”

Philbrick’s book addresses weighty matters but is nevertheless an enjoyable read, a fitting if unusual capstone to a trilogy on the revolution. At times, the book seems like a valedictory. The author’s many readers hope not.

Philbrick ends on a metaphor. In 2020, a balancing rock that Washington could not move fell of its own accord – or by erosion. Traveling and writing amid pandemic and political and social upheaval, Philbrick is pessimistic, writing: “Things feel different this time. The sinews of this country have been stretched to what feels like the breaking point.” But failure would not, ultimately, be the founders’ fault, for “[w]ith the combined gifts of the Declaration of Independence and the union, they provided the means for future generations to transcend the injustices and inadequacies of their own time. The fault will lie with ourselves.”

While sailing to Newport, Rhode Island, the Philbricks – highly experienced sailors – hit a terrifying storm with 70-knot winds near a tornadic waterspout arising suddenly in Vineyard Sound. Theirs was a harrowing escape: “Only then did the reality of what we’d been through begin to sink in – how while we were worrying about the thunderstorms ahead, an unexpected tornado was racing toward us from behind.”

Their lines were coiled tightly, preventing sailing. Yet “with the help of a marlinspike and a screwdriver we pried open the mass and began to untangle the lines. It proved to be a necessary and cathartic collaboration.”

That is Philbrick’s hope for – and urgent call to – America. Will we answer it?