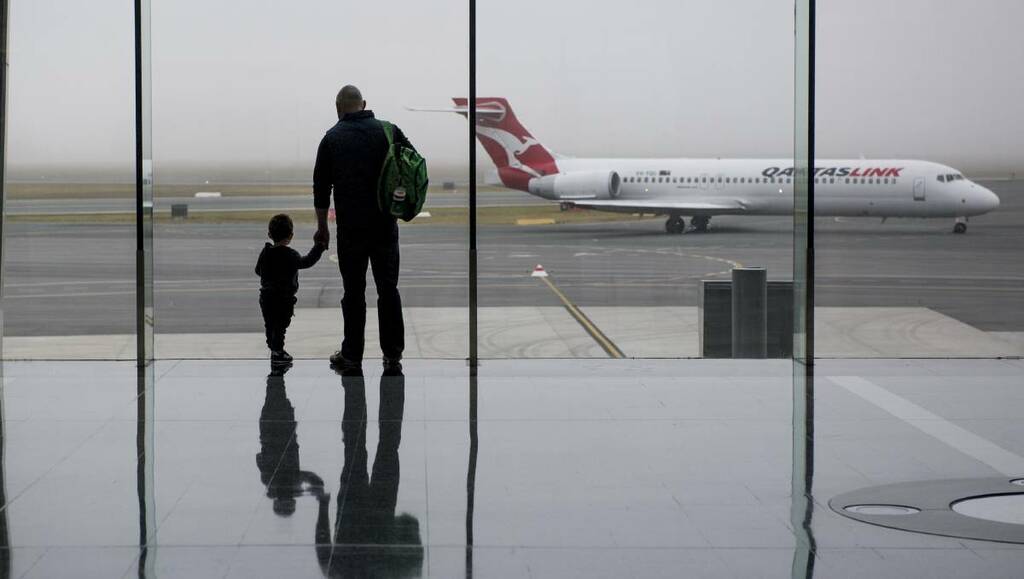 Searches for overseas flights nearly tripled in the week after Qantas unveiled plans to revive international travel, in another sign Australians are desperate to head overseas.

And Canberra travel agents are limping to Christmas, as the federal government lays the groundwork for international travel to resume by the end of the year.

Qantas last month unveiled a plan to revive overseas travel by December, nearly two years after COVID-19 force an abrupt end to flights, and the carrier saw an 175 per cent increase in online flight searches the following week.

December was the most searched-for month for travel, in a sign Australians were eager to head overseas as soon as possible. Qantas domestic and international CEO Andrew David said Australia was on track to reach the 80 per cent trigger by the end of the year.

"After more than 18 months of closed international borders, it's clear that Australians can't wait to get back on an aircraft and head overseas again," he said.

"So many people have missed out on seeing loved ones who live overseas or taking a well-deserved break.

"While it's up to Government to determine exactly how and when our international borders re-open ... international travel is within reach."

The national carrier has also backed federal government plans to establish a vaccine passport for international travel in the coming weeks.

London proved the most popular destination for budding travelers, with flights to the UK capital from Sydney and Melbourne the most searched routes. They were followed by searches for Sydney to Los Angeles, Sydney to Singapore, and Sydney to Tokyo.

The reopening of international travel was likely to be staggered, as the federal government strikes travel agreements with different countries.

A suspended travel bubble with New Zealand was expected to open once 80 per cent vaccination was reached in Australia, and outbreaks in both countries were brought under control.

Qantas has made other destinations with high vaccination rates - the UK, North America, Singapore, and Japan - its initial focus. But concerns over low vaccination and high infection rates saw the carrier delay travel to a range of other popular destinations - including Bali, Jakarta, Bangkok, and Phuket - until at least April.

Australian tourists made more than 1.4 million trips to Indonesia in 2019, and 540,000 to Thailand. But both countries have struggled to energise their vaccine rollouts, with 15 per cent and 16 per cent full vaccination rates respectively.

The federal government has pledged a million vaccine doses to Fiji, another go-to for Australian tourists.

NSW Premier Gladys Berejiklian this week confirmed international travel to and from the state would resume once 80 per cent of its 16 and over population was fully-vaccinated.

Mr Dirnberger said he had been forced to cut his staff from four to one, as the business' turnover fell by between 90 and 95 per cent, and no longer drew a salary.

He said bookings in Canberra had not improved despite more optimism among customers, who remained concerned about border closures and quarantine on return.

"People have cold feet. They are at the starting line, and they want to book the holidays. But they're reluctant because they don't know what's happening."

He said the travel agency was processing over a hundred customers per week before COVID-19 struck, but was now confined to embassy staff immune from COVID-19 restrictions, and the few people exempted from them.

"It's basically one a week other than diplomats, I'd say. Diplomats might be another one or two a week one," he said.

Even before the pandemic struck, travel agencies were suffering from the advent of online booking websites. But Mr Dirnberger hoped the industry would experience a boon post-COVID, with customers needing support to navigate a patchwork of international rules.

The UK currently listed Australia as a green-zone country, meaning travelers to London were only required to undergo a PCR test before entry. But those transiting through Doha, listed as amber by the UK, would need to quarantine on arrival.

"That doesn't make sense. At least in the near and middle-term future, I would very much advise any person to go to a travel agent. The rules and regulations are so complex that really can lose out very, very badly," he said.

"I can understand where people going to the internet because it's $10 or $50 cheaper, but in right now you pay for that."

Support for the national reopening plan has fractured over the past month, with Queensland and WA flagging they may attempt to maintain restrictions beyond 80 per cent vaccination.

Tourism Minister Dan Tehan said their co-operation was vital, but was optimistic about international travel before the end of the year.

"To ensure we hit our goal we need every Australian to roll up their sleeve and get vaccinated," he said.

"The national plan is our way to open up safely and it is absolutely vital that all states and territories stick to the plan."