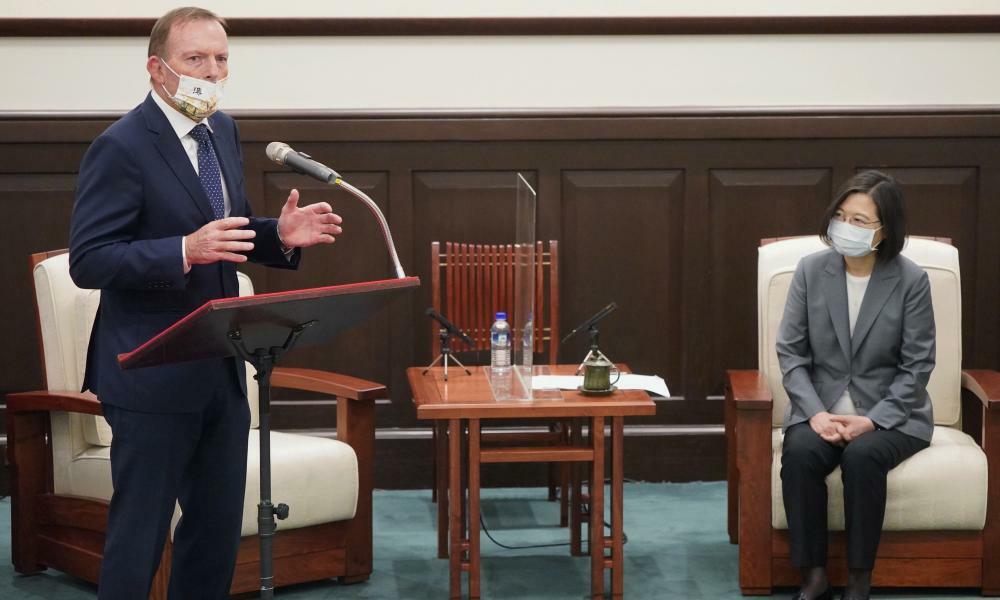 The former Australian prime minister Tony Abbott has told the president of Taiwan he hopes his visit to the democratically ruled island will help end its isolation from the international community.

Abbott met Tsai Ing-wen at the presidential office in Taipei on Thursday. He said China’s recent incursions into Taiwan’s air defence zone made it even more important that “fellow democracies stand shoulder to shoulder with you”.

The ex-prime minister, speaking a day before he is scheduled to deliver a keynote speech to a regional conference, appeared to describe Taiwan as a “country” – a position opposed by China which considers it a renegade province.

“It is in large measure to try to help to end this isolation from which Taiwan has been suffering for so many decades that I am here in this country and I do hope that this will be the first of many visits,” Abbott said.

Under the Australian government’s one-China policy, Australia does not recognise Taiwan as a sovereign state, and therefore dealings between government officials take place unofficially. But Canberra has flagged its support for deeper ties, particularly on the economic front.

The Australian prime minister, Scott Morrison, told reporters in Canberra on Thursday that Abbott was “a private citizen” visiting Taiwan in a private capacity.

But Taiwan considered the trip significant enough to grant Abbott a meeting with Tsai on Thursday and the event was also attended by Jenny Bloomfield, the representative of the Australian Office in Taipei.

During an exchange broadcast by the presidential office, Tsai said she wanted to extend a warm welcome to Abbott on his first trip to Taiwan. She hoped the visit would “facilitate even more cooperation and understanding between Taiwan and Australia”.

Tsai thanked Abbott for voicing support for an economic cooperation agreement between Australia and Taiwan and for backing Taiwan’s inclusion in the Comprehensive and Progressive Agreement for Trans-Pacific Partnership.

“Your statements on the importance of a secure and peaceful Taiwan Strait are also greatly appreciated,” she said.

Abbott, in turn, described Taiwan as a model for the wider world and “certainly a model for so many countries in this part of the world”.

Taiwan, he said, had “transformed from an impoverished dictatorship into a vibrant, dynamic, pluralist democracy”.

“Of course not everyone and not everywhere is pleased [by] Taiwan’s progress and I do note that Taiwan is challenged on an almost daily basis by its giant neighbour. It’s more important than ever, under such circumstances, that your fellow democracies stand shoulder to shoulder with you.”

Abbott said the best thing that countries like Australia could do for Taiwan was to try to build an “ever deeper relationship across the board” but particularly in trade.

Abbott said he could not think of a stronger signal of democracies standing shoulder to shoulder with Taiwan than accepting Taiwan’s accession to the CPTPP.

“Obviously I can’t make specific commitments on behalf of the Australian government, but I am confident that I do speak for the entire Australian people when I say that as a people we wish the people of Taiwan to continue to flourish in peace and in freedom.”

Tsai had earlier noted the Australian government had been “actively adjusting its strategies in response to geopolitical changes in the Indo-Pacific region” and had backed Taiwan’s international participation.

“Taiwan is willing to contribute to upholding regional peace and stability,” she told Abbott, who was Australia’s prime minister from 2013 to 2015. “We seek to deepen collaboration with other freedom-loving democracies in such areas as vaccines, emerging technologies, climate change and supply chains.”

Abbott began his remarks by thanking Tsai for her “wonderfully warm and deeply courteous welcome” but also took a swipe at face masks.

“I am looking forward to my next trip to Taiwan, a trip where I’m sure it will be possible to enjoy the bounty of this wonderful place, where, please God, we won’t be required to wear these wretched masks any more,” he said on Thursday.

“On that note though, I should congratulate Taiwan for being the one place on Earth which has best tamed this Covid beast and has managed to do it without any major restrictions on economic activity and human freedom.”

Taiwan remained largely Covid-free during the pandemic, after shutting its borders to non-residents early, enacting strict quarantine measures, and encouraging widespread mask-wearing. Taiwan currently requires all entrants to quarantine in a hotel at their own cost or in a government facility.

During its largest outbreak earlier this year, Taiwan went into a soft lockdown, ordering public sporting venues, adult and entertainment venues, and restaurants to close – except for takeaway. The more than three-month shutdown was widely followed but did prompt complaints from some business owners, particularly in hospitality, who were devastated by the economic hit.