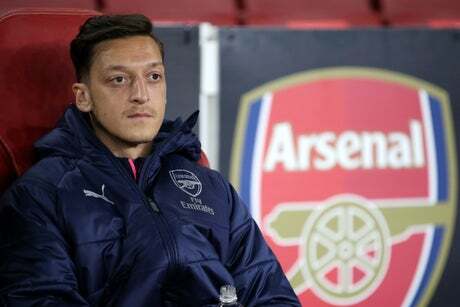 How Mesut Ozil reacted to Arsenal exclusion under Mikel Arteta
Mesut Ozil's agent has lifted the lid on the midfielder's reaction to being frozen out by Arsenal.

Newsroom.co.nz
From analysis to good news, read the world’s best news in one place
Source: McDaniels, Ziegler Expected to Be at Kaepernick’s Workout

The quarterback is working out with the Raiders later Wednesday afternoon at the franchise’s facility.

Honda announced some cosmetic changes for the 2022 Super Cub 50, bringing a little color to its smallest-displacement lineup for…

'Today is going to be special', Eddie Howe shares inner feeling when the sets foot into St James' Park

Eddie Howe has delivered an entertainment pledge to Newcastle United supporters after thousands of season tickets were renewed long before the May 19 ticket office deadline.

The Magpies will bow out in front of their own supporters in front of a packed St James' Park crowd on Monday night with Arsenal heading to the North-East bidding to clinch Champions League football. But Howe is eager to send fans away for the summer with a special night.

Howe has been delighted by the response in season ticket renewals and with many more fans returning to St James' Park after walking away during the Mike Ashley era, he now wants to maintain the positive environment.

READ MORE - The David Ginola problem that was never solved

When asked about the enthusiasm when it comes to season ticket renewals and demand, Howe told Chronicle Live: "It is a great sign, a great sign for us. There is that demand and willingness to support the team.

"I hope that we can give them some very entertaining football to watch. We want to keep that passion and support where it is right now, because it has been a huge force for us. We have loved playing in front of it and having it as a force behind us. Together we are a formidable team. Long may that continue."

Newcastle fans will clap off their team one last time at St James' Park on Monday night after the clash with the Gunners. Under Howe in 2022 at home in the Premier League, only Liverpool emerged with three points.

It is the type of record that Howe is keen to keep up next season. And although the former AFC Bournemouth boss is focused on the final two games, he is looking forward to next season, especially at St James' Park.

Howe said: "If we can build our home ground into a fortress, a place in which teams don't want to come - that is a massive thing. There's certainly a powerful thing at St James' Park at the moment. There's just a feeling - and even I get it - coming into the stadium, even when it's empty, it is a great feeling.

"You are coming into St James' Park and thinking: 'Today's going to be special'. The supporters have created that for us.

"Now, going back to our last game, I was a little bit disappointed with the intensity we delivered. We have set our standards so high, we can't drop it, for any game, home or away - it's the least supporters deserve."