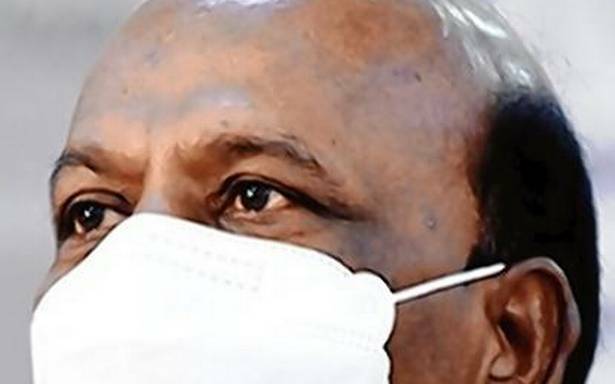 Health Minister Ma. Subramanian has sought an additional allocation of one crore doses of COVID-19 vaccines from the Union Health Ministry for the mega vaccination camp planned to be held in Tamil Nadu from September 12.

In a letter to Union Health Minister Mansukh L. Mandaviya, Mr. Subramanian requested additional doses of one crore COVID-19 vccines for Tamil Nadu along with an equal number of 0.5 ml Auto Disable (AD) syringes or one ml/two ml syringes for the proposed mega camp. This is in addition to the already-committed 1.04 crore vaccines for government COVID-19 vaccination centres, he said.

He pointed out that as a next step to increase the COVID-19 vaccination drive in the State, it was decided to conduct the mega camp on a weekly basis, starting from September 12. This was to cover the left-out unvaccinated eligible population aged above 18 years in the State without diluting the daily vaccination drive.

The Government of India, till September 5, has supplied 3,31,84,824 doses of COVID-19 vaccines and 1,83,95,400 (0.5 ml) AD syringes to the State, he pointed out. The State has about 6.06 crore eligible population aged above 18 years to be covered with two doses of the vaccines. Till September 5, the State has covered 2.63 crore beneficiaries with the first dose, while 68.91 lakh beneficiaries were vaccinated with both doses in government vaccination centres, he stated.

The State is administering about 5 lakh doses per day for the last seven days. Considering the current pace of vaccination, the current supplies were adequate for only three to four days making it difficult to plan to cover the eligible left-out population, Mr. Subramanian said. The Minister noted that the remaining 3.44 crore persons needed to be vaccinated with the first dose and about 18.99 lakh persons were due for the second dose as on September 5. This was already represented to the Union Health Minister during the recent meeting in New Dehi on September 3.

The TN Minister recalled that during the meeting, the Union Health Minister also agreed and impressed on the need to ensure 100% vaccination in all schools, colleges and to cover the left-out unvaccinated eligible population on a priority and time-bound basis and promised all assistance in this regard.

Considering the continued higher positivity and higher number of cases reported daily in the neighbouring state of Kerala, the need to vaccinate all eligible persons in the bordering districts was also mentioned during the interaction. Mr. Subramanian said that during the interaction, the Union Minister asked the State to aim and ensure 100% vaccination for the left-out eligible population on a priority basis in all nine bordering districts of Coimbatore, Dindigul, Kanniyakumari, Tenkasi, The Nilgiris, Theni, Tirunelveli, Tiruppur and Virudhunagar. It is estimated that 65.76 lakh population in these nine districts have to be given the first dose of vaccine.

As a result, the State was planning to further increase the pace of vaccination and has realised that the large unvaccinated population continued to make the State vulnerable for COVID-19, despite all other measures.