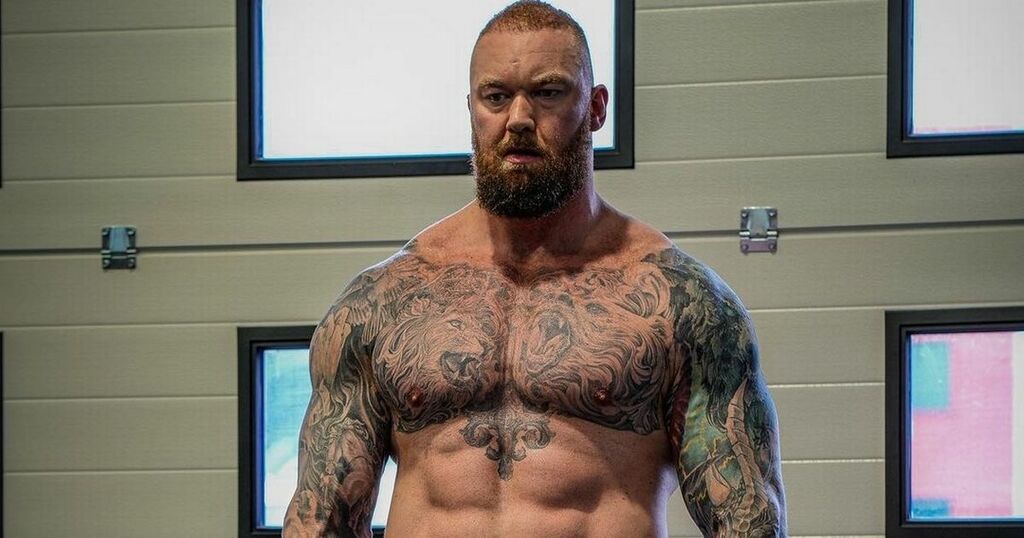 Hafthor Bjornsson has said that he is feeling more energetic and believes he is a more active father after taking up the sport of boxing and dropping over 100 lbs.

The Game of Thrones star and former world's strongest man has lost a massive amount of weight as he prepares for a boxing match against fellow strongman Eddie Hall.

And despite the fight with Hall being postponed, Bjornsson has continued working on his abilities in the ring, and will face arm wrestling champion Devon Larratt on September 18 in Dubai.

In a new documentary, produced by the strongman and his sponsors Reign Total Body Fuel, the 6'9" Iceland native explained how he was constantly tired as he hit over 32 stone in an effort to win strongman competitions.

"I used to weigh 205 kg at my heaviest," Bjornsson told cameras for the new film, titled Road to fight Eddie Hall.

"I figured out soon the heavier I got, the stronger I got so I would just eat a lot, eat, eat, eat every two hours, snack, and after every meal I'd be so exhausted I'd fall asleep.

"I was willing to sacrifice my health which is crazy if you think about it."

Bjornsson and his wife Kelsey Henson have one son together, and he also has a daughter named Theresa Líf with ex-girlfriend Thelma Björk Steimann.

And he says that he has become more active with his children since losing the weight, now finding it easier to play with them due to his slimmer figure.

"Now I'm somewhere between 152 and 155kg and I feel so much better," he explained in the documentary.

"I'm running around holding my son up in the air, playing with him, it just makes life better.

"Being with your kids, seeing them laugh, seeing them happy, there's no better feeling - I'm just trying to become a better person every day.

"I want to be better in every way, better husband, better father, I truly believe we can all get better every day."

Bjornsson has competed in two exhibition boxing matches in preparation for his big fight with Larratt at the Sport Society in Dubai, and is favoured to defeat the arm wrestler when they square off.

He has taken on solid pros Steven Ward and Simon Vallily in Dubai as a way to hone his skills, and had his chin tested by Vallily, who dropped him twice in their bout earlier this year.

Both he and Commonwealth games medalist Vallily hit the canvas during a hard-hitting four rounds of action in front of a select crowd in Dubai.

Valilly entered the ring a whopping 80 lbs lighter than his opponent, although his strong amateur background and 21 pro bouts made him the much more experienced fighter in what was essentially no more than a hard spar without headgear.

Hafþór Björnsson is a Reign ambassador and will fight Devon Larratt on September 18 in Dubai.