If you haven’t studied up on your Marvel deities, now’s the time. The latest trailer for Thor: Love and Thunder features a sneaky reference to several of Marvel’s most powerful beings, making the shot far more notable than fans may think.

The film, which is set to hit theaters this July, promises to reintroduce moviegoers to Jane Foster (Natalie Portman), who will transform into The Mighty Thor just in time to help Thor (Chris Hemsworth) stop Gorr the God Butcher (Christian Bale) from killing every known deity in the universe.

Gorr’s deicidal quest is expected to result in the introduction of several powerful new beings in the MCU, including Zeus (Russell Crowe). In fact, the second official trailer for Thor: Love and Thunder briefly travels to a location that appears to have been built in honor of some of the MCU’s most powerful multiversal beings.

A Hall of Statues — Around the 1:47 mark of the latest Thor: Love and Thunder trailer, Natalie Portman’s Jane can be seen standing in a massive hall lined by several giant statues. The statues appear to have been built to resemble several of the MCU’s most powerful beings, including The Watcher (Jeffrey Wright) and the Living Tribunal.

The other statues appear to have been made in honor of characters not yet seen in the MCU, which makes determining their identities difficult. That said, most Marvel fans seem to agree that one of the statues is depicting Death, while another may have been made to resemble Infinity. The hall’s fifth and final statue, meanwhile, is rumored to showcase a Marvel Comics figure known as Eon.

In other words, the statues all seem to be of obscure figures who also happen to be some of the most powerful and abstract characters in Marvel history. In the case of The Watcher and the Living Tribunal, they’re also characters that have very recently been featured in the MCU.

Marvel’s Multiversal Beings — The Watcher, a being charged with observing the events of every reality throughout the multiverse, was introduced last year in Season 1 of What If…? The finale sees The Watcher break his own vows by personally leading several of the multiverse’s greatest heroes to stop a power-hungry variant of Ultron.

The Living Tribunal, meanwhile, has yet to play much of a role in the MCU, but has been confirmed to exist within it. This year’s Doctor Strange in the Multiverse of Madness even features a brief moment where Stephen Strange (Benedict Cumberbatch) and America Chavez (Xochitl Gomez) crash into a multiverse that’s being observed by the Living Tribunal.

In the comics, the Living Tribunal is a cosmic being charged with safeguarding and maintaining balance throughout the multiverse, a task that sometimes requires making sure one universe never becomes too powerful, evil, or heroic. Much like The Watcher, the character is designed to keep the stability and impartiality of the multiverse in check. Death, Infinity, and Eon are similarly abstract beings whose mere existence is tied to the creation of the multiverse itself.

The Inverse Analysis — It remains to be seen exactly how important these statues are to the plot of Thor: Love and Thunder. For all we know, it’s possible the statues will appear in the film exactly as they do in its latest trailer: As Easter eggs for Marvel fans to notice and speculate about. Conversely, it’s possible Jane’s journey to the mysterious location seen in the trailer is tied directly to Gorr’s quest in Love and Thunder.

That means Gorr could very well set his sights on killing one of the beings whose statue stands behind Jane in the film. However, even if that’s not the case, this shot still suggests that Thor: Love and Thunder may continue where What If…? and Multiverse of Madness left off by introducing and exploring some of Marvel’s most powerful multiversal beings. 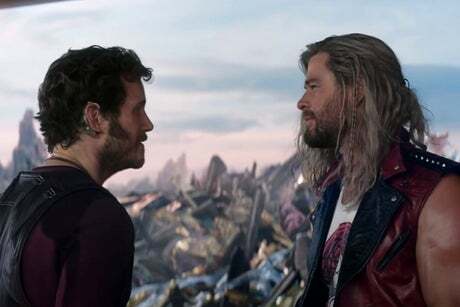