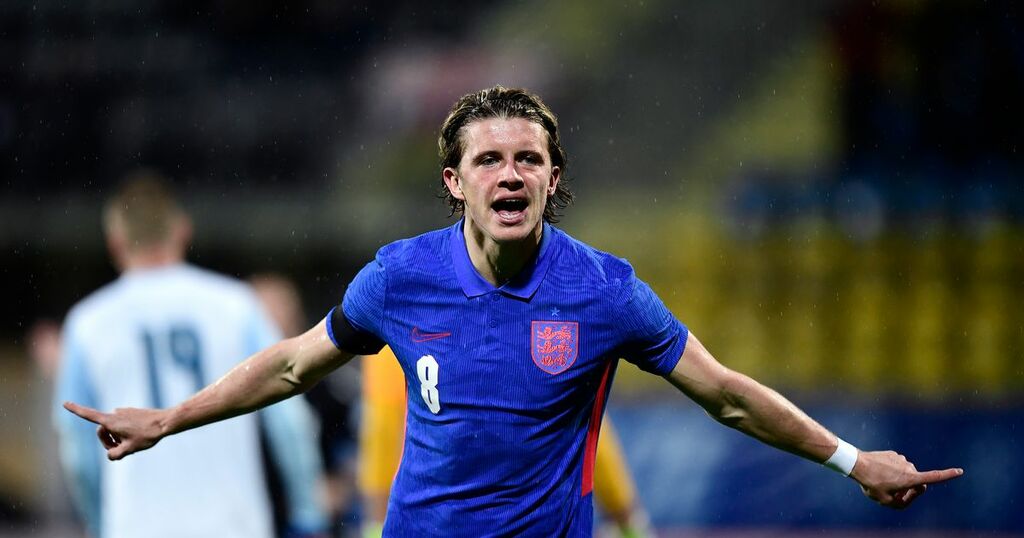 Chelsea may not even need to splurge £85-100million on either one of Declan Rice or Jude Bellingham come the next few transfer windows as the right option could be closer to home.

Conor Gallagher, 21, has shocked all Blues fans who have been keeping a close eye on his progression over the last few years, with his quality and maturity clearly evident during his loan spells at West Brom and currently Crystal Palace.

His consistent Premier League performances so far during the 2021/22 campaign has earned him back-to-back Player of the Month awards in south London.

But more importantly, other clubs across the country have started to look into the possibilities of signing the England U21 international come the end of his loan spell at Selhurst Park in May.

One of those said clubs are Newcastle United, who have been taken over by Saudi Arabia's Public Investment Fund, who have a £320billion net worth.

In their mission to take Newcastle to the top, the 21-year-old has been pinpointed as one player who could join the new owners and supporters of the North East club on what could turn out to be an incredible journey for everyone involved.

The Daily Mail are reporting that Gallagher is on a list of potential midfielder targets that the Newcastle board are mulling over, alongside Leicester City's Youri Tielemans, ahead of an ambitious January move.

With this news coming out, Marina Granovskaia now has a big decision to make as to whether or not the attacking midfielder has a long-term future at Stamford Bridge.

Unfortunately from a Chelsea fan perspective, the early signs are negative when it comes to this question as Granovskaia is aiming to secure the £100m purchase of either one of Rice or Bellingham come the summer at the latest.

But the real question is whether or not this extortionate fee needs to be paid for this specific position, especially considering the need to strengthen in Thomas Tuchel's mind at the back?

This issue was brought up on Sam Inkersole's Chelsea Q and A on Tuesday afternoon as tudor125 asked our Chelsea writer about the chances of the club securing one of either Rice or Bellingham in the upcoming transfer windows.

Inkersole's response was: "West Ham hold all the cards with Rice as he's still got three years on his contract with the option of another. He's not agitating for a move either. I suspect Chelsea will still be in for him in the transfer window but Manchester United will be sniffing around as well.

"Jude Bellingham is a fantastic player and I'd be going all out to get him if I were Chelsea. The Blues are well-stocked in a central attacking area of midfield but Bellingham, especially as he would qualify as a homegrown player as well, is a very attractive proposition for a transfer. He won't come cheap, mind.

"I think it would be a case of signing one or the other as both is unlikely, in my opinion."

Tudor then brought Gallagher into the equation with his reply: "I agree, hard to pass up on someone with a ceiling as high as Bellinghams but I think Rice would allow us to be more flexible formation wise and move to a back 4, a midfiled of Rice-Bellingham-Mount would be something else... Do you think the arrival of a midfielder next year affects the immediate futures of Jorgi/Kova?

"Add on top of that the return of Gallagher from loan who Tuchel seems to like, surely someone has to make way?"

Inkersole predicted: "It will surely have affect on Jorginho or Kovacic if another midfielder came in but it depends if Tuchel plans to stick with his back five for the foreseeable future. If he reverts to a four then you can get an extra midfielder in there alongside them both but if five at the back is being stuck with then, obviously you can get them all in.

"Conor Gallagher coming back from his loan would throw another spanner in the works. Perhaps a new signing isn't actually needed in midfield if Gallagher continues to progress at the rate of knots he is at Palace..."

If Patrick Vieira's opinions and predictions are anything to go off, then the answer to the question in mind is that Chelsea's board do not need to spend substantial money in the midfield position as they already have their perfect N'Golo Kante among their ranks.

Vieira has now issued an eight-word verdict about Gallagher, saying the Chelsea loanee can reach the top level, something that will excite the Blues fan base.

"I strongly believe he has what it takes [to reach the top level]," Vieira said about Gallagher.

"He still has parts of his game that he needs to improve, but when we're doing feedback on his game, the way he takes in the information and the way he translates it after on the field shows me, he's somebody that wants to improve.

"Taking information in with detail allows him to be a more complete player and for that, he has a big chance at getting to the highest level."

Now, this isn't to say that the west Londoners need to completely abort their midfielder hunt with Monaco's Aurelien Tchouameni potentially proving a bargain at a rumoured £35m as an initial Kante backup and eventual replacement once the France international does leave Stamford Bridge.

football.london currently understands that central defence and central midfield are the two positions high-up on the to-do list come the mid-season transfer period starting in January.