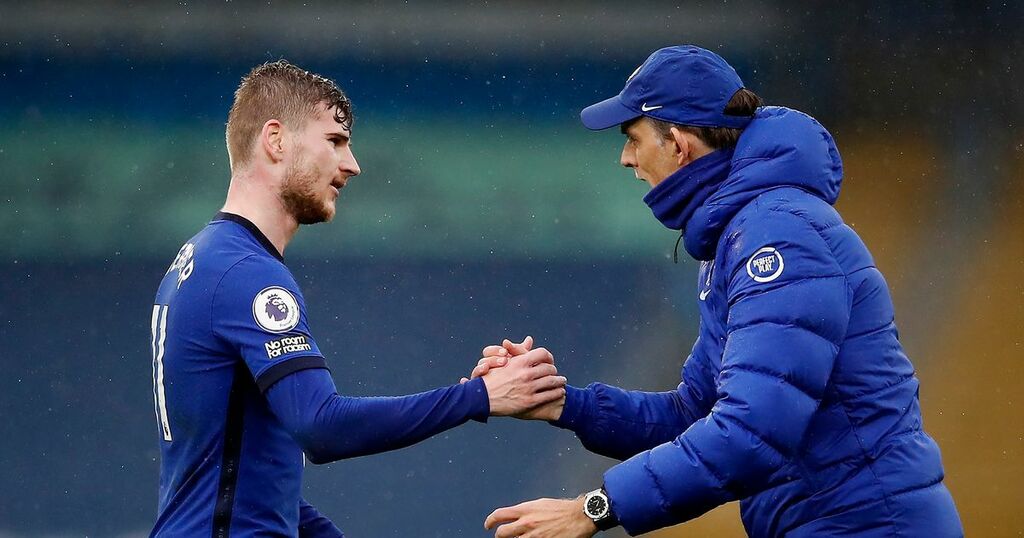 Timo Werner has netted five goals for Germany in five games since Hansi Flick took the reigns of Die Mannschaft, replacing Joachim Low after their EURO 2020 exit at the hands of England in the last 16.

Two of those goals came on Monday night as the Germans became the first European side to qualify for the 2022 World Cup in Qatar with an emphatic 4-0 win over North Macedonia.

The Chelsea striker netted twice in three minutes in the second half, adding to Chelsea teammate Kai Havertz’s opener in Skopje before Jamal Musiala finished the game off late on with the fourth goal.

After his double earlier this week, Werner said he feels the “trust” of Flick, who left Bayern Munich at the end of last season to take control of the national team.

The Blues striker said of his national coach: “He’s very good for me. If a coach likes you and relies on you, it helps every player.

“As a striker, I especially need to be trusted externally. I’m trying to pay it back and I hope that I can keep giving it back.”

Three days prior, Flick had been somewhat critical of Werner as Germany laboured to a 2-1 win over Romania in World Cup qualifying.

Werner started the game but was replaced on the hour mark by Bayern’s Thomas Muller having failed to register a shot on target in the game.

"It looked like he [ Werner ] didn't always have the proper positioning.

"One had the feeling that he was keeping a bit too level with whoever had the ball on the outside, whether it was Serge or Gnabry. If a ball came out of the back, he didn't have a chance.

"He acted a bit too close to the goal instead of starting .

"He can do better and we will also expect that from him. There we have to train on the runs again. Primarily, it's a matter of positioning inside the 18.

“In Leipzig he had 25 to 30 goals every season. He's a striker who knows how to score goals. Timo plays in one at Chelsea - a top team. He gets the missions with us, he gets the backing from us.”

Now, this is not to say that Thomas Tuchel doesn’t back Werner. Far from it in fact.

The Chelsea head coach said of the 26-year-old striker ahead of the Carabao Cup win over Aston Villa earlier this month: "Timo did very well at Tottenham.

“That gave us a clear impression of how dangerous these two can also be together. There was some disappointment to brush off his shoulders from the Euros during the summer.

“And from the first games I think he was not happy with the performances in the beginning. We know that he can be much more dangerous and much more of an attacking threat than he was.

“But in the last training sessions he’s been more relaxed, more fluid in his movements, and showing more confidence.

“And that’s why we put him on early against Tottenham, because we saw this development and there are clear signs that he is on a good way."

Werner’s struggles in front of goal since arriving in west London from RB Leipzig last summer have been well documented and it’s unnecessary to go over them again.

With the signing of Romelu Lukaku on a club-record deal in the summer and the Belgian being the “missing piece” for Tuchel’s side, Werner’s place in the Blues side was very much under threat.

It appeared that was the case too as the Germany striker started only one of the first five Premier League games for Chelsea this season, that solitary start coming in the season opener against Crystal Palace when Lukaku was unavailable.

Tuchel is of the belief that Werner and Lukaku can play together despite it looking incredibly awkward and ineffective in Chelsea’s defeat to Man City when both started the game at Stamford Bridge.

With doubts surrounding the fitness of Lukaku and a game against Brentford on the horizon this weekend having missed the UEFA Nations League third place play-off, Werner could once again be named in the starting eleven this weekend. The Bees have started their first top flight campaign in fine style and sit seventh after their first seven games.

What is clear is that Werner needs the backing from his manager, whoever it may be, to get the best out of him. Tuchel has consistently defended Werner while also acknowledging that he expects a little bit more from him, as well as Germany teammate Havertz.

Tuchel and Flick will both have their ideas about how to get the best out of Werner but perhaps the Blues head coach can look at how Werner has been scoring for his country to get him to translate it to the Premier League.

Which is very much easier said than done, of course.