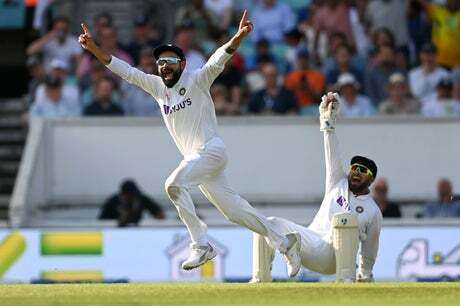 You look at this India side and you just know they will not let up in their pursuit of a series win in the final Test this week, or drop the ball like Australia did two years ago in allowing England to draw the Ashes 2-2.

India have had many good teams and great players in the past, but this one is different. They have more swagger and snarl, and believe they can win from anywhere. That is what the great sides, like the Australians 20 years ago, have – and it is a very powerful thing.

Every time a game has been in the balance on the final day of this series, they have grabbed it – at Lord’s and the Oval. Surely only rain denied them at Trent Bridge, too.

That comes mainly from the skill of individual players. Look at Jasprit Bumrah at the Oval on Monday. With the pitch desperately flat, Bumrah found the best spell he’s bowled all series, and the hint of reverse swing that England had been unable to locate to blow the game open.

The hundreds might not be flowing from Virat Kohli’s bat, but he plays his part. If you analysed him tactically, he’s not the greatest captain. He follows the ball so much that if you attached white tape to each fielder that followed them around, you would a) run out of tape, and b) not be able to see any green on the outfield.

But that is not unusual in great captains, because there is more to it than tactics. There is man management, and even that leaves a bit to be desired (but  man management is not about keeping people happy). And there is the sheer drive you can install in a team. That is his great strength.

India have always had great batters, but they have never had fast bowling stocks like this. It has allowed them to rotate, but also to leave out Ravichandran Ashwin, their best bowler, and still get the better of England.

We have all had a chuckle about that selection call, and I think they would have won sooner at the Oval if he had played, because the pitch was tailor-made for him. But Shardul Thakur – who picked up the most important wickets – and Ravi Jadeja – who played his part in finding that crucial bit of reverse-swing – were key to the victory, having been selected ahead of Ashwin. His absence just shows how strong India are, they are in this position in spite of not picking him.

On the final day on a flat pitch, India looked totally at home, whereas England had lacked options. It has been the area of improvement they have targeted most under Chris Silverwood, but I don’t see any progress in cracking open flat pitches. They are fantastic in games like Headingley, where line and length is key.

India showed it is very subtle things. Bumrah is quick, but he is not the quickest bowler on the planet. And Thakur is only bowling 80mph, but making key breakthroughs. Yet they found that little bit extra to turn the game.

There has been some talk about Moeen Ali at the Oval. For me, he should have bowled throughout the fourth day, while the seamers rotated. But I don’t know why anyone is surprised by his performance in this series. At his best, he is a matchwinner, but at times he can drop a long way below that. He has been like that throughout his Test career. I think he is a fine player, and right player for the balance of England’s side, but we shouldn’t be surprised by what we have seen.

Mo is a good example that England do not have heaps of options. They are going back to players they have used before, rather than having newcomers knocking on the door.

England’s bowlers will all be tired going into this Test. What they need more than anything else is for the batters to score 500. I don’t believe they lost at the Oval on the final day, they lost it when they couldn’t get more than 99 past India’s first innings with the pitch so good for batting.

The batters must keep their standards high. Ollie Pope and Haseeb Hameed looked good as top scorers in each innings, but we should not settle for fifties. We need to keep the bar high – just as India do.