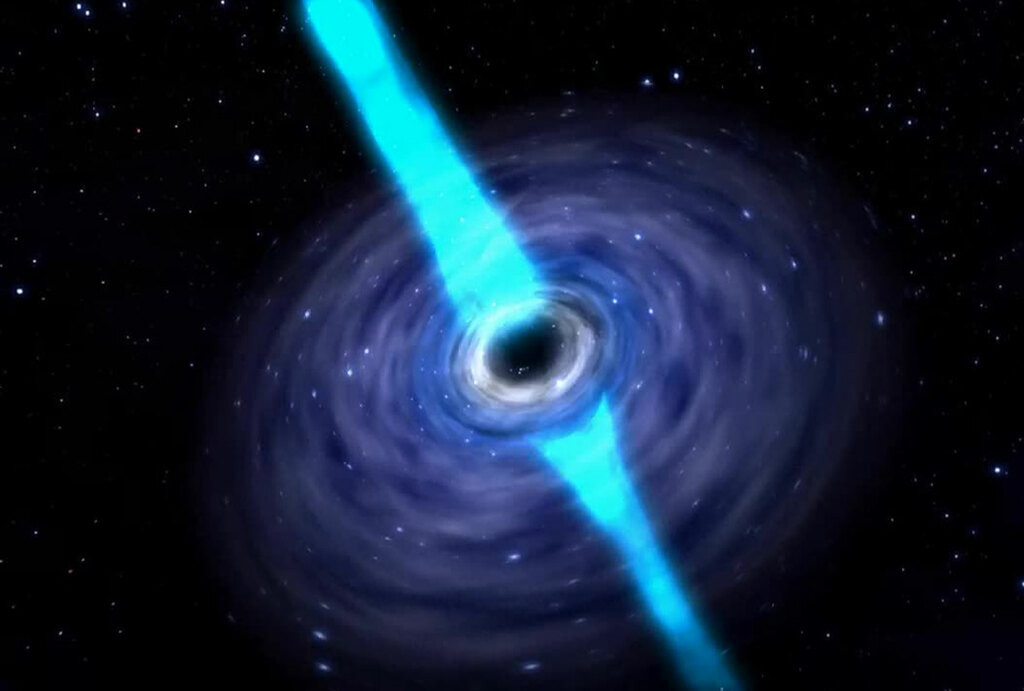 Black holes are better known for their ability to bend space and time than their gold-forging abilities. Yet that may change: new research suggests that black holes may be able to create super heavy elements, like gold, in their vicinity.

That's according to a new paper published in the Monthly Notices of the Royal Astronomical Society, which says that black holes have the optimal energy conditions to create heavy elements. The finding is significant because elements such as gold and silver have only been known to originate in space under extreme astrophysical conditions, like stellar explosions.

Even the idea that a cosmic collision can create gold is a relatively new idea in astronomy. In 2017, scientists first announced they detected gold in the wake of a collision of two neutron stars. This new research suggests that the universe is more full of gold than previously thought, and the way in which it is being forged is happening in astonishing ways.

The paper comes from researchers in Germany and Japan, whose computer simulations of black holes with massive accretion disks found that they often synthesized heavy elements like gold. Accretion disks are fast-spinning haloes of matter that orbit around black holes at high speeds.

"In our study, we systematically investigated for the first time the conversion rates of neutrons and protons for a large number of disk configurations by means of elaborate computer simulations, and we found that the disks are very rich in neutrons as long as certain conditions are met," said astrophysicist Oliver Just of the GSI Helmholtz Centre for Heavy Ion Research in Germany.

Just explained that these "conditions" are dependent on the total mass of the disk.

According to the new paper, the more massive the accretion disk, the more often neutrons are formed from protons — and thus more neutrons are available for the process of nuclear reactions to occur, which creates heavy metals. In other words, the black hole, in optimal conditions, eats gas and dust from its environment and possibly generates heavy elements in the process as that matter spins and abuts other matter at high speeds, occasionally fusing into heavier elements.

Does that mean that gold chunks are spinning rapidly around black holes? Perhaps, but it will likely be a long time until researchers have an answer. Black holes are difficult to study directly, as most are quite far from Earth and the space-time around them is highly distorted.

A black hole is a singularity in space that is so dense and so massive that its escape velocity is greater than the speed of light — meaning anything that falls into it will be absorbed, even light. They form when certain types of massive stars see their cores implode. The concept of a black hole was first theorized by English scientist John Michell in the 18th century, and later developed further by Albert Einstein in the 20th century in his General Theory of Relativity.

Despite technological advancements in astronomical imaging, black holes have long been enigmatic, partly because they are so compact and dense. The nearest known black hole to Earth is 1,500 light-years distant; for comparison, the nearest solar system, Alpha Centauri, is a mere 4.3 light years off. In 2019 the Event Horizon Telescope Collaboration presented the first-ever direct image of a black hole.

According to the paper, not all black holes create gold — just those in a Goldilocks zone, with the right mass and whose accretion disks are within a specific range. In fact, those that have disks that are too massive, or too light, likely won't do the trick.

"However, if the mass of the disk is too high, the inverse reaction plays an increased role so that more neutrinos are recaptured by neutrons before they leave the disk," Just said. Neutrinos, which are tiny, near-massless particles, are crucial in the conversion process between protons and neutrons.

Specifically, the study states, the optimal disk mass for an abundant production of heavy elements is about 0.01 to 0.1 solar masses. One solar mass is equal to the mass of our sun.

Geologists have found gold in rocks on Earth that are as old as 4.5 billion years, which was right when Earth formed. Still, nobody knows exactly how Earth's gold originally formed. Stars like our sun, which fuse smaller elements into heavier ones, are too low-mass to ever produce elements any heavier than oxygen — which is 8th on the periodic table and thus has 8 protons. Gold atoms have 79 protons, and could only be created under very high-energy conditions in which smaller-mass atoms were colliding in close proximity.

It is believed that our solar system formed from a nebula of gas and dust, which was in turn created when an earlier star, far more massive than our sun, exploded; that explosion created at least some heavy elements, which now reside in the planets and asteroids of our solar system (and possibly other neighboring systems, too). Some of the heaviest metals in the solar system and on Earth, however, may have been created yet earlier in other high-energy stellar collisions or events — whether hypernovae or neutron star collisions; or perhaps, as this research suggests, generated from black holes' accretion disks.

Researchers believe that figuring out how heavy elements are created in the universe will provide clues to physicists here on Earth.

"The predicted abundance of the formed elements provides insight into which heavy elements need to be studied in future laboratories to unravel the origin of heavy elements," researchers said.