The weeks that shook Twitter: How Elon Musk built his stake

NEW DELHI: Twitter users woke up April 4 and found the words “Elon” and “Elon Musk” trending on the site — not because the world’s richest, most-followed businessman had caused a stir with his futuristic companies, but because he’d disclosed a major stake in Twitter Inc.

Suddenly, Musk was Twitter’s largest individual shareholder, with more than 9% of the company, and speculation swirled about how he would influence the network’s future. He’d been frequently tweeting ideas for revamping the social media platform.

Over the next week, Musk would accept an offer to join Twitter’s board of directors and, in a sudden reversal, reject that offer five days later, leaving the company’s management, employees, investors and interested observers guessing about his plans.

Will Musk continue buying Twitter shares at market prices, slowly building up his position until he—potentially with a sympathetic co-investor or another current shareholder — holds enough of the stock to control its destiny? Will Musk decide to buy shares from Twitter’s other investors? Will Musk ultimately decide to sell his shares and pocket his gains? As the news develops, here’s a look at what’s happened so far:

Musk started quietly buying Twitter shares on January 31. By March 14, Musk had accumulated an over 5% stake, the point after which he was supposed to disclose the activity to the Securities and Exchange Commission, and by extension, the public.

Musk missed the deadline to inform the SEC by 10 days. Because Twitter’s share price rose the second his stake was revealed, he was able to accumulate more on the cheap by not disclosing — a misstep that would later trigger a shareholder lawsuit.

“Free speech is essential to a functioning democracy. Do you believe Twitter rigorously adheres to this principle?” Musk asked his Twitter followers in a poll posted on March 25.

“Is a new platform needed?” Musk asked in a tweet on March 26. “Am giving serious thought to this.”

Several users commenting on the Tesla chief executive officer’s tweet recommended he look into buying Twitter instead. Soon they would find out he was already acquiring shares.

Musk’s filing listed him as a passive investor, and yet, shortly after it became public, he started tweeting out business propositions for the social media company.

Musk posted another poll on Twitter asking users to vote on whether they wanted the company to add an edit button that would allow people to change tweets after they’ve been published.

Twitter CEO Parag Agrawal urged users to “vote carefully” on the poll. “The consequences of this poll will be important.”

By the end of the day, Twitter invited Musk to join the board. Musk signaled that he would sign an agreement stipulating that he could not own more than 14.9% of the company’s stock.

In the morning, several of Twitter’s board members took to the platform to congratulate Musk on his decision to join their ranks. Agrawal tweeted that the company and Musk had been chatting for weeks. Agrawal’s tweet led people to question why someone engaged in discussions to become a director would file as a passive investor.

I’m excited to share that we’re appointing @elonmusk to our board! Through conversations with Elon in recent weeks, it became clear to us that he would bring great value to our Board.

Later that day, Musk refiled the disclosure of his stake to classify himself as an active investor, making the change only after indicating that he would accept a seat on the social media company’s board.

April 9: Musk rejects the board seat

The day that Musk was set to officially join Twitter’s board, Musk informed the company that he would be rejecting its offer. But, Twitter sat on the news for roughly 36 hours while waiting to see whether Musk would change his mind. Twitter’s investor relations website listed Musk as a board member throughout the weekend.

During that time, while the public still thought Musk was set to join Twitter’s board, Musk tweeted several veiled criticisms and suggestions for the company. Musk asked his followers, “Is Twitter dying?”

Musk suggested that everyone who signs up for Twitter Blue, a subscription version for power users, should get an authentication checkmark. He suggested Twitter should convert its San Francisco headquarters into a homeless shelter “since no one shows up anyway.” And he made some crass jokes, suggesting removal of the “w” in Twitter.

On Sunday, Agrawal sends out a note to employees, and later tweets it publicly. Neither Agrawal or Musk give a reason for the reversal.

Elon has decided not to join our board. I sent a brief note to the company, sharing with you all here.

Musk files an amended disclosure with the SEC. He can now purchase as many shares as he wants. Without a board seat, he no longer has to act in the best interest of Twitter shareholders.

At Twitter, which doesn’t have a founder with majority control like other tech giants, employees are “super stressed,” concerned that this is only the beginning of the whiplash.

In an SEC filing and accompanying tweet, Musk said he would buy out stockholders in a cash deal valued at $43 billion and take Twitter private. The offer is $54.20 a share, a 54% premium over the price when he started building his stake in January. The number is also an apparent (and not-very-subtle) reference to Musk’s failed bid to take Tesla private in 2018 for $420 a share — and, of course, to a special number in pot culture. He described the Twitter offer as his “best and final” one. 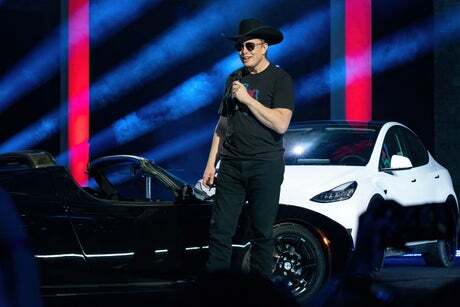 Evening Standard
From analysis to the latest developments in health, read the most diverse news in one place.
Twitter investor sues Elon Musk for failure to promptly disclose his shares

The Guardian - US
Elon Musk Offers To Buy Twitter : Will Donald Trump Get His Handle Back?

US securities law requires investors to disclose within 10 days when they have acquired 5% of a company, which in…

Analysis: Musk’s past musings about Twitter show desire to reshape essence of its business model

The Guardian - UK
One place to find news on any topic, from hundreds of sites.
Elon Musk gives Twitter reasons to reject his bid

"I don't care about the economics at all."