The stories behind iconic motorway graffiti that drivers passed every day 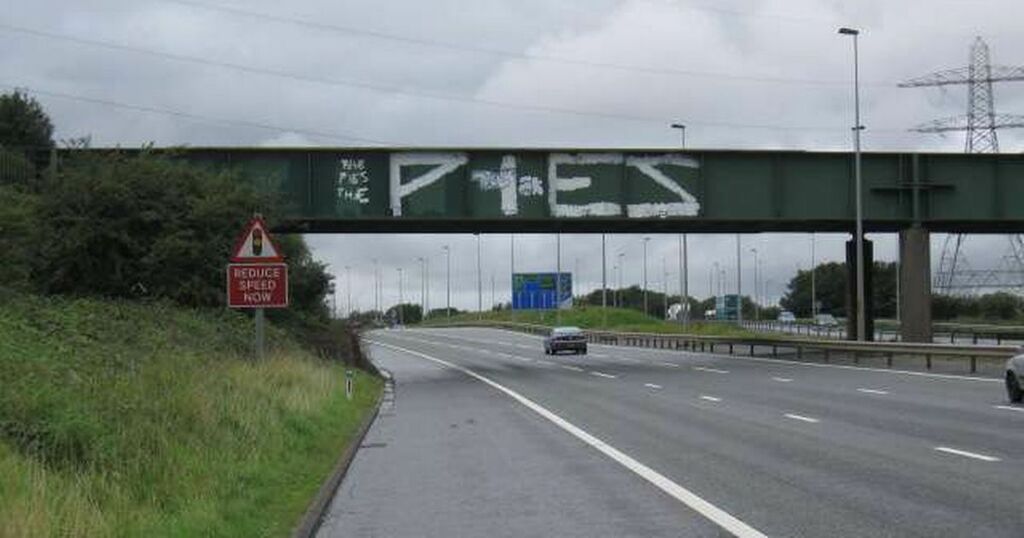 Motorway graffiti can become part of the scenery for drivers, marking certain distances in their journeys and becoming a sign that they are almost home.

Merseyside motorists will recall the lettering reading 'The Pies' on a bridge over the M57 and other motorways in the region - a mark that their journey was almost finished.

However, graffiti on many bridges over the M6 in Lancashire has recently been removed over fears that it could be a distraction for drivers and cause a crash.

It is not the only graffiti which has been removed or replaced in recent years.

We take a look at the stories behind some of the country's most iconic and strangest motorway graffiti, beginning with the recently removed messages in Lancashire.

In November 2021, graffiti appeared on many bridges on the M6 between Preston and Lancaster.

Rule 264 of the Highway Code states that, when driving along a three-lane motorway,: “You should always drive in the left-hand lane when the road ahead is clear. If you are overtaking a number of slow-moving vehicles, you should return to the left-hand lane as soon as you are safely past.”

The RAC stated that laws introduced in 2013 give police officers the power to hand out on-the-spot fines of £100 and three penalty points, meaning failing to keep left on the motorway could hit you in the pocket.

However, the graffiti was removed this month due to fears that it could cause crashes.

A spokesperson for National Highways told LancsLive: “Graffiti is designed to catch the eye, so the roadside is the worst place for it.

"Any unnecessary distraction for motorists can cause collisions and cost lives.

"That is besides the cost of removing it which could be better spent maintaining our roads.”

For more than 30 years, faded white lettering on a bridge above the M57 was among the region's most-loved graffiti.

The message changed many times over the years, but many people will remember it reading "The Pies".

This related to the Liverpool band The Pies, who have maintained a cult status across Merseyside as their name has been daubed in feet-high white paint at unusual locations, also the M6, the M62 and on the Mersey Tunnel ventilation shaft.

The original graffiti was actually painted on a bridge above the M57 after the band said they "became stuck" on the bridge and "didn't know what else to do".

In 2016, he told the BBC: "The M57 is the famous one, 'The Pies The Pies' was basically because we got stuck on the bridge and we didn't know what to do, so we wrote The Pies again.

"It stayed up over twenty years, and Alexei Sayle used to say the council would paint around it."

Papa Mashee, from The Pies, previously said: "The Pies The Pies M57’ is loved by the people the length of the country. North westerners love it because they know they are home. It is on the best graffiti of all time on many motorists’ lists.

"It’s make a lot of people laugh a lot – I mean belly laugh. It helped Alexei Sayle make his first novel Overtaken – where he devotes the first six pages including the foreword speculating hilariously about what it means and who did it."

In September 2020, people in Merseyside were furious after the iconic landmark had been defaced.

Targeted by coronavirus conspiracy theorists, the historic graffiti was removed and replaced by the word "Plandemic."

Many were left in anger as The Pies Music slogan has always been a key landmark to people returning home.

A footbridge over the M61 was daubed with phrases on both sides in early 2019.

On the southbound carriageway, drivers were urged to 'GROW THE REVOLUTION', the Manchester Evening News reports.

The first thing that stood out is that the 'EVOL' section of the message is written in red.

The letters in 'EVOL' are also written back-to-front in a way that, when seen through the rear-view mirror, will read 'LOVE'.

More eagle-eyed drivers may also spot the Extinction Rebellion symbol, within the second 'O' in 'REVOLUTION'.

On the other side, drivers on the northbound carriageway noticed another cryptic message.

This time painted in white, it stated : "BURN FUEL DON'T CARE WE ALL SHARE THE SAME AIR".

A spokesman for the Bolton arm of Extinction Rebellion denied that the graffiti was down to them but admitted it was someone close to the group, albeit someone who wanted to keep their identity a secret.

They said: "The people who did it are friends of Extinction Rebellion. They prefer to be anonymous."

In 2019, the blue bridge over the M4 just north of Bristol had a new message written on it.

In early July of that year, someone painted the words ‘Boris is...’ on the eastern side of the bridge, in full view of oncoming westbound traffic, BristolLive reports.

The message was painted over by Network Rail staff. But the message ‘Boris is Helch’ appeared in its place in August.

The strange phrase apparently had its roots in west London graffiti. The word ‘Helch’ appeared on many buildings in the capital from September 2018.

The Chalfont Viaduct on the M25 had the message ‘Give Peas a Chance’ graffitied on it for decades, but it was replaced by the words ‘Helch a Chance’ that month.

Graffiti reading Helch began to appear in many places, including South Kensington and Paddington.

Reporters at MyLondon spoke to someone who claimed to know who ‘Helch’ was.

They claimed he was an old school graffiti tagger who had suddenly, in middle-age, gone back to his youth and begun painting the name ‘Helch’ - which doesn’t necessarily mean anything, it’s literally just a word, apparently - everywhere.

The Urban Dictionary claims the word "helch" is either a combination of a "hiccup" and a "belch" or the shortening of the phrase "hell yes".

However, MyLondon’s source said: "It was just a name that he picked. It's got no real significance, it's just his tag."

Whether the same Helch was responsible for the M4 graffiti remains to be seen.

As mentioned above, the Chalfont Viaduct over the M25 once read: “GIVE PEAS A CHANCE”.

BuckinghamshireLive reports that the graffiti first read simply “PEAS” - thought to be the tag of a London street artist.

However, the remainder of the message were later added around it, providing a pun on John Lennon’s 1969 song ‘Give Peace a Chance’.

As we found out earlier, this message was later replaced by the ‘Helch a Chance’ message.

People were not pleased with this development. A Facebook group was launched to bring back the old message and a petition reached 2,000 signatures.

Though the message was not brought back, HELCH’s statement was replaced with a blue and white message that read ‘THANK YOU NHS’ in March 2020.

The Facebook group’s admin, Marc P. Summers, said: "This is the greatest thing to happen to the bridge since it was messed with by Helch over 18 months ago.”