The Spinoff: Mourning a Kiwi classic, the humble jandal 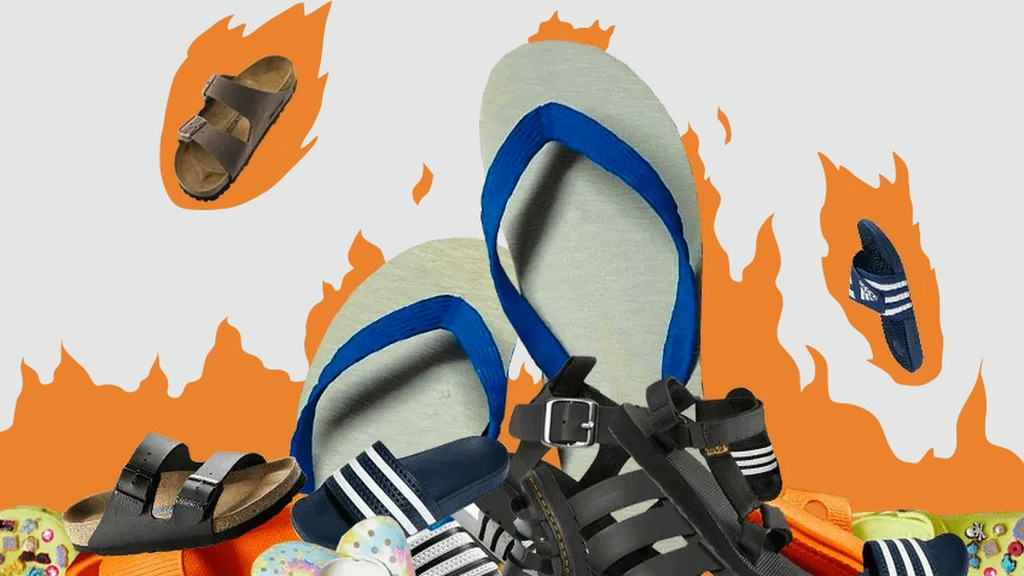 Originally published by The Spinoff

The humble jandal is no longer on every New Zealander's feet. Madeleine Chapman mourns a classic.

I never thought I'd feel a pang of nostalgia at the sight of jandals. They were supposed to be part of Aotearoa's summer scenery forever, like pōhutukawa and wraparounds – neither intrusive nor noteworthy. But this summer I have kept my eyes peeled for a flat piece of rubber out in the wild and come up disappointed time and time again. Where did jandals go? Having once held a monopoly on the open-toed summer shoe market here, jandals have been overrun by competitors seemingly overnight. Now they are but one of a dozen (often superior) options.

The jandal's greatest strength has become its downfall: they've never been cool or fashionable. Don't bother looking, there's not a single version of a jandal that is fashionable. That's not to say that people haven't worn them in close proximity to fashion, but proximity is all it is. Jandals are like bike helmets. They serve an important purpose and therefore manufacturers have long since given up making them look good. And if you think you've seen a fashionable jandal, what you've seen is a sandal.

But that's the joy of it. Jandals are an equaliser. Millionaires wore the same jandals (Havaianas, never black and never with the thin strap) as me, a 13-year-old. We were all equal on the same hot sand. Now millionaires wear $220 Arizona Birkenstocks or $160 Tevas. But it's not just residents of Herne Bay embracing an encased yet open toe. Everyone's into Birkenstocks, Crocs are inexplicably on every corner and slides have exploded beyond sports changing rooms.

Here's a fun fact: the word "jandal" is trademarked in New Zealand after being coined by a New Zealand man (which New Zealand man is up for debate and, honestly, irrelevant). The word is a mash-up of "Japanese" and "sandal". The word jandal will live forever, cemented to this place and this place alone, superior to "flip flop" and the cursed "thong". In typing that sentence I have just now realised that the two thongs are actually linguistically related as both meaning a narrow restraint. Wow.

Personally, I have always been staunchly team jandal. Why fix something that's not broken? And even if it is broken, just use a bread tab. Every second summer as my feet grew I would find someone, usually a sister, to buy me a new pair of Havaianas. The colours! I had some stunners: lilypad green, hot pink, tropical sea blue, shocking yellow, and most recently fluro orange. Havaianas were my brand of choice because they wouldn't break when I ran in them. I could sprint as fast in jandals as I could in running shoes.

The only purchase I made on my trip to Japan as a teenager was a multi-pack of socks designed specifically to be worn with jandals. As in, the big toe had its own sleeve. I had been ruining socks for years wearing them with jandals and now I had the solution. I spent $40 (the entirety of my spending money as a 16-year-old on a sports trip that was otherwise fully funded) and came home with four pairs of the greatest socks I'd ever worn.

All of my basketball teammates graduated to slides around then for after games when your feet are soaked in sweat and need air but you don't want to take your socks off to leave the stadium. I resisted, instead sliding my weird toe socks into my jandals and waltzing on out.

I never thought that jandals looked good, I just thought all competitors looked equally bad and jandals were my preferred bad aesthetic. But then everyone decided that socks and slides were cool. And Birkenstocks were cool. And now Crocs are cool. And weird hybrid platform sandals are cool. Everything ugly is cool now, except jandals.

There are some who will never ever change. I went to a movie in the middle of winter two years ago and my friend showed up in jandals, stubbies and a swanndri – a walking caricature. He'd also gone to Countdown for snacks beforehand (smart) and brought along a bag 12 snack-sized Crunchie bars to eat throughout the movie (unhinged). But his status as a local hero remains despite that hiccup, and I know without asking that he's still wearing jandals nearly every day.

For me, well, my jandals barely see the sun. In 2021 I cracked. Throughout the last lockdown I bought many things online just to feel the little burst of joy at receiving a package. One such purchase was a pair of blue velcro sandals ("extremely ugly" I said at the time) that were 92% off. I wanted to test out this new world without investing too much financially. The sandals were chunky and felt like clown shoes compared to my sleek jandals and they gave me blisters, so I had no intention of wearing them outside the house. But they got a truly astounding number of compliments from people around me. Everyone loved the ugly sandals.

Three weeks later I ordered my first pair of slides. Annoyingly, they worked immediately and didn't look as weird with my work clothes (which are admittedly still very casual) as my jandals always did. I even wore them with socks and it was…fine. Now I'm looking at Birkenstocks online. I am consumerism's star pupil. There are so many options now. Showing one's toes isn't simply the unfortunate byproduct of hot weather and jandals anymore. It's a fashion choice.

My orange jandals are still in my room. I wear them sometimes when I'm cooking or pottering around the house. And when I leave the house – usually in my slides – I don't see them out on the street. I see buckles and straps and foam and leather. Like cockroaches, jandals will live forever and maybe one day they'll return to their place at the top of the ugly footwear pyramid. But for now I say farewell to my rubber friends, may we meet again someday.