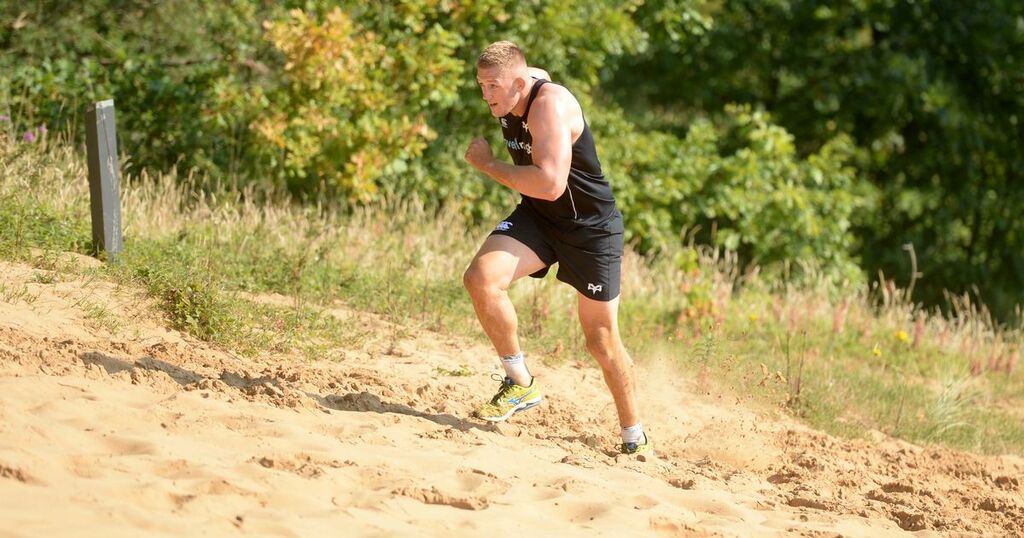 Lloyd Ashley is not a rugby player who commands the spotlight.

But his sizeable frame has been a handy asset for the Ospreys down the years and he recently became just the 19th player in the region’s history to amass 150 appearances.

It puts him in a pantheon of the side’s favourite sons, alongside the likes of Alun Wyn Jones, Dan Biggar, Adam Jones, Andrew Bishop, Dan Evans, Justin Tipuric and Rhys Webb.

There was little fanfare to mark his outstanding achievement, though it was notable how much noise his fellow pros made.

Tributes were pouring in from those who share a training field with Ashley everyday, which perhaps tells you everything you need to know.

A bit of further investigation leads to clarity over why he is one of the most popular figures at the region, and in Welsh rugby.

“Lloyd’s always been one of the good guys. He’s always held his standards to the highest order on and off the field,” former team-mate Scott Otten told WalesOnline.

“It goes a long way.

“He’s one of those guys where you know that if you pick up the phone, he’s going to answer it.”

Ashley’s efforts on the field are matched – at the very least – by his efforts off it.

Almost two years ago he set up a business, Living Well With Lloyd Ashley. The company provides a wide range of services but at its core, it promotes mental health awareness.

Ashley himself goes into schools to deliver mental resilience programmes that often focus particularly on young men between the ages of 14 and 18.

“We’ve all put that 18-year-old limit on becoming an adult but I don’t think we're equipped well enough to deal with those decisions and understand the pressures that might come on,” Ashley told WalesOnline.

He also goes into businesses to deliver mental health first aid courses, teaching managers and colleagues how to support a member of staff who may be suffering.

Then there is the Resilience for Rugby programme, which is supported by Steve Mellalieu, Ospreys’ sports psychologist, and Dr Dale Thomas, the WRU’s clinical psychologist.

The three of them construct the course but Ashley is the man delivering it to academy players of all four regions, despite him being an employee of the Ospreys.

“I don’t think going to different regions has changed a lot. I think they look at me as a rugby player rather than an Ospreys rugby player.”

Ashley runs the company and delivers the programmes by himself. If he’s not at the training ground, he’s ploughing his energy into his business.

But first and foremost, he is a professional rugby player and one that always has time for his team-mates and makes the environment a more enjoyable place to be.

There are instances where team-mates may approach him looking for a bit of support. The big lock will then be on hand to help out himself, or put something more formal in place with Mellalieu or Tim Jones, the Ospreys’ Welsh Rugby Union Players’ Association representative.

“Lloyd offers advice and speaks out when he needs to, always being supportive in meetings, and he always speaks sense,” adds Otten. “Having someone like that around you can fill the room with confidence.

“And it’s not just what he says, it’s his actions. If he wasn’t picked, he’d be the first charging around trying to get the jersey back and that could go on for a couple of weeks or a couple of months but he would never change, he’d lead from the front.

“I guess that’s what he’s trying to do now outside of rugby. He’s leading through his experiences.

“I know Lloyd pretty well and we’ve discussed things that we’ve learned from when we were younger and how we’ve become the men we are now due to that.

“So I see him from that point of view and, frankly, it’s quite astonishing how he manages to keep himself at that level for so long.”

In May last year it was announced that hooker Otten was being forced to retire from the game at the age of just 26, after suffering a neck injury a few months earlier.

Otten spoke of the ‘gut-wrenching’ decision he had to make and he will surely have fought battles that most will never know about.

But his mate was there for him.

“Lloyd was my point of contact because I knew our relationship and what he was doing outside of rugby. There was no better person to speak to,” says Otten, who is now focusing on growing his coffee business, SO Coffee Trades.

“We’ve never just been rugby colleagues, we’ve always been mates. He was a massive help to me.

“He knows what to say and the right time to say. He also knows what not to say.

“There would be days when I called him for a chat and he was always there. He’d always text me.

“I would talk to him about how I was feeling and what I was going through.

“He was a good guy to talk to and he helped me understand certain things. He’d offer his advice, he reads the conversation and he’s a very wise, intelligent and hard-working man. You’ve just got to admire him.

“Any negative that comes into his life, he knows how to spin it.

“Look, he’s not a superhuman but he’s trying to help other people and that in itself is something you admire. I look up to him and I think I always will.”

Not all athletes will wield their influence for the benefit of others and, let us be clear, they are under no obligation to do so.

But Ashley has chosen a different path and it deserves recognition.

And it was the personal experiences – whether it was being ill-equipped to deal with a team-mate he suspected was struggling mentally or the realisation that ‘we’re not creating enough safe spaces for people to talk’ – that pushed him to take action.

“When I was around 23, 24 and 25 I had three seasons when I just couldn’t get a string of games together,” he recalled.

“I was being selected when I was fit but I was getting injured all the time, I had three or four different operations.

“At that time, I wish I understood how to explain my emotions better.

“There were people that were willing to speak to me but I wasn’t willing to say it because I didn’t know how to explain my frustration.

“Instead, I’d probably just be short and snappy and pretend that everything was okay.

“I wasn’t in a very bad state or verging on mental illness, but my mental health wasn’t very good on a day-to-day basis.

“I made the first few weeks of those injuries a little bit harder for myself by not actually being so honest about how I felt.

“I just didn’t know how to have those conversations. So I hope that I’m able to teach those younger professionals to be a lot more honest and that they can use the support around them.”