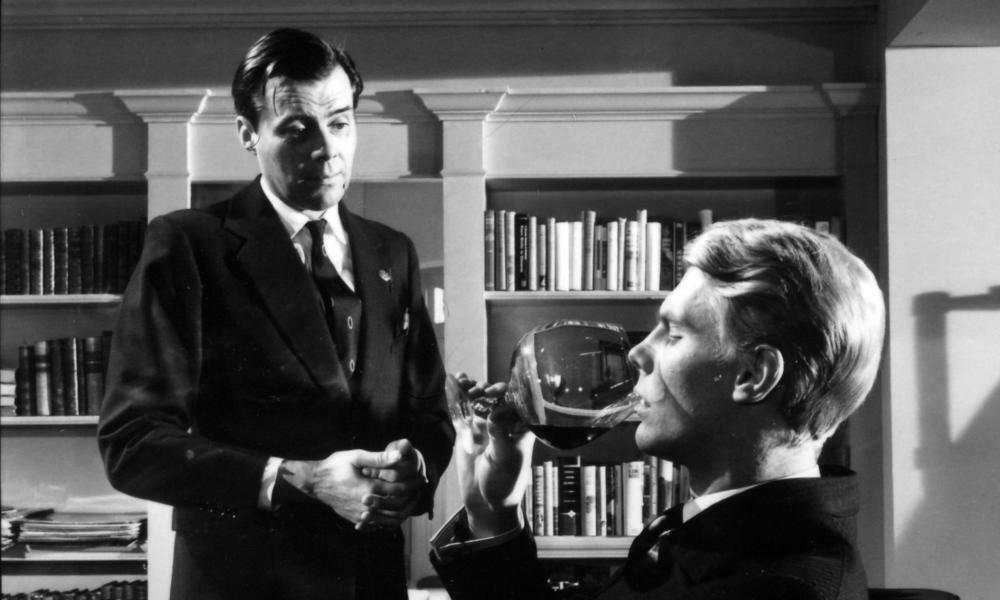 Joseph Losey’s monochrome psycho-horror satire from 1963 is now re-released; it took an expatriate American to orchestrate this very English festival of class, fear, sex and shame with its menacing screenplay by Harold Pinter. Dirk Bogarde stars as the sinister manservant who gradually gains psychological control over his weak-willed master played by James Fox. The film was first considered unreleasably upsetting and weird, and notoriously gathered dust for a year on the shelf while Bogarde was humiliatingly forced to make another of the cheesy Doctor comedies he was trying to put behind him – Doctor in Distress – to pay off a tax bill.

Bogarde plays Barrett, a professional manservant whose manner is sometimes self-effacingly blank, sometimes ingratiating, camp and cunning. He is hired as a live-in valet by Tony (Fox), a spoilt and indolent young man on a private income who lives in a handsome London townhouse. Barrett soon makes himself indispensable, parasitically reducing the already lazy Tony to a state of infantilised torpor, becoming a kind of wife to him, to the irritation of Tony’s actual fiancee Susan (Wendy Craig). Then Barrett asks if his sister Vera (Sarah Miles) can come as the live-in maid, and the sexy Vera entrances Tony – who gets weaker, more reliant on drink and hopelessly submissive in the face of Barrett’s controlling mind games.

Gay sexuality is everywhere and nowhere in The Servant: the relationship with Vera in fact heterosexualises an actual event in the life of Robin Maugham, author of the original novel, when his own manservant offered to introduce him to a teenage boy described as his “nephew”. It is a woman who seduces Tony, but it is a man (Barrett) who pulls the strings, effecting the seduction at one remove. Pinter’s own elliptical, disquieting dialogue is able to hint, imply, suggest, seduce, repulse in precisely the way that gay men were forced to adopt in 1963, when homosexuality was still a criminal offence. The Servant is like a nightmarish version of PG Wodehouse’s Jeeves and Wooster: the benign, discreet and all-knowing servant effectively controlling everything in the life of the feather-headed young man who is notionally in charge. In The Servant, they are more like Dr Jekyll and Mr Hyde, or maybe Edward II and Gaveston in Christopher Marlowe’s play.

In the end, servant and master are bound by the hideous intimacy of shame; this is what brings them together in their dance of psychological death. Tony is ashamed of having fraternised with the servant, and Barrett – however gleeful he might secretly be at the success of his strategies – is finally ashamed of having been trifled with by the master. Losey’s film was a brilliant attack on the British class system, which showed every sign of continuing on into the swinging 60s era.

And my own view is that Losey was electrified by this material because Barrett is not simply a parasite, a predator and a sociopath, but also a parodic fifth-columnist: the enemy within. The red-baiters, the people who had effectively driven Losey out of the United States, were obsessed with the threat of these people: insinuating themselves allegedly into every institution in the country, especially Hollywood, with their agreeable and plausible liberalism, but their gradual communistic influence was undermining the nation, undermining its patriotic resolve and leaving it vulnerable to attack. Losey made a brilliant and counterintuitive imaginative leap, dramatising this paranoia and bringing it to monstrous life. It is one of Bogarde’s greatest performances.

• The Servant is released on 10 September in cinemas and on Blu-Ray, DVD and digital platforms on 20 September.