The Rotten Core of Our Political System

Alexander Burns and Jonathan Martin are star political reporters for The New York Times, and their scoops in This Will Not Pass: Trump, Biden, and the Battle for America’s Future have already made headlines. But the book is more interesting than just for perishable news that will attract ogling Washington insiders. It’s a document of decline and fall—a chronicle that should cause future readers to ponder how American leaders in the early 21st century lost the ability and will to govern. Step back from the page-by-page account of congressional Republicans’ desperate grasping for Donald Trump’s favor or the Biden administration’s struggle to pass its legislative agenda: You’re confronted with a world of almost unrelieved cowardice, cynicism, myopia, narcissism, and ineptitude, where the overriding motive is the pursuit of power for its own sake. It’s rare that a politician thinks about any cause higher than self-interest.

The book’s Democrats are at least sane, but they’re beset by petty quarrels, forever trying to solve the “identity politics’ Rubik’s cube,” and dragged down by a pervasive exhaustion; their elderly leaders are unable to grasp the brutal political forces swirling around them. The Republicans are hell-bent on the destruction of American democracy, or else too craven to stand in the way—the result is the same. Each party has a handful of impressive young politicians, but because they take governing seriously, they’re probably doomed to obscurity or defeat.

The book covers the frenetic events of 2020 and 2021, from the battles over the pandemic through the summer of protest, followed by the election, attempted insurrection, and inauguration, ending with the long, publicly opaque anti-climax of Joe Biden’s first year in office. The broad outline of this period is all too familiar. Trump casts a long, sinister shadow, but we have nothing new to learn about him—the stories just confirm his unfitness as a human being, let alone president. The authors are tireless reporters, and the book’s impact lies less in any headline revelations than in the accumulation of small details that can almost seem routine but that reveal the deeper condition of American democracy.

For example, the Biden campaign arrived at the choice of Kamala Harris as the nominee’s running mate, not because it trusted or even much respected her, but “through a process of elimination” that ruled out stronger contenders whose records carried any whiff of controversy, such as Senator Amy Klobuchar and Representative Karen Bass. Ron Klain, Biden’s longtime adviser, decided that Harris was the safest, best choice because she was the only woman of color who had been “vetted” during the presidential primaries (even if her performance was largely disastrous); also, she was a friend of Biden’s late son, Beau. On this basis, the campaign selected the Democrat most likely to lead the party into the post-Biden era. The inevitable result has been continuous tension and resentment between Harris and most of her colleagues in the White House.

[Read: Kamala Harris’s political memoir is an uneasy fit for the digital age]

The Democrats’ characteristic form of cowardice is risk aversion. For the Republicans, it’s moral weakness. Two days after the election, Senate Majority Leader Mitch McConnell assigned his deputy, John Cornyn, to tell the Delaware Democrat Chris Coons to pass a message to Biden, the president-elect in all but name: “McConnell would recognize Biden as the winner of the presidential election, just not quite yet.” On top of this, “Biden should not call McConnell too soon,” because the Republican would have to decline a conversation with his old Senate colleague. McConnell required nearly six more weeks to judge the time right. The purpose of all this theater was to ease Trump into oblivion without inciting the wrath of other Republicans and imperiling McConnell’s own position of power.

This brief vignette almost passes for business as usual, even a quiet show of honor on McConnell’s part. So it’s worth emphasizing the meaning: The leader of the Senate Republicans would not publicly acknowledge the country’s new president without first insulating himself in elaborate layers of manipulation and disguise.

Petty political acts occur on every page. Senator Susan Collins coolly asks two civil-rights leaders why she should vote for an election-reform bill when “the voting process in Maine worked well for her.” Senator Kyrsten Sinema, the flamboyant and inscrutable Arizona Democrat, ingratiates herself with an audience of business donors and lobbyists by declaring her affection for several House Republicans who continue to push the lie of a stolen election, including Andy Biggs, an extremist bigot from her home state who once declared Democrats to be “an adversary that’s trying to wipe this country out and change it forever.”

Biden shrinks from one chance after another to push the two contending factions in his party to pass major legislation, leaving the dirty work to the two Democratic congressional leaders, Speaker Nancy Pelosi and Senator Chuck Schumer. Pelosi is a legislative powerhouse who has stayed on too long and is trying to construct a legacy in a rising swamp. Schumer seems so conventional and recessive that he’s wholly unequal to the task of holding his caucus together. Delusional vanity plays a part in the follies of both Democratic factions. Centrists deceive themselves into believing they can forge a bipartisanship that doesn’t exist, while progressives can’t see what’s in front of their faces—that they have little public support.

Biden comes across as a decent man in the wrong era and out of his depth, barely visible to the public, too trusting of both his colleagues’ good faith and his own powers of persuasion. Far from being a master dealmaker, he’s tactically indecisive and strategically trapped between two competing goals. Unlike most of this book’s characters, Biden has ambitions higher than simply power: He wants both to heal the nation and to “craft a presidency of grand and lasting impact,” but he can’t see, let alone resolve, the inherent contradiction between these objectives. The verdict so far is clear: The second was always unlikely, and the first was never possible.

The failures of the book’s Democrats do not threaten the republic. The rotten core around which our democracy has begun to collapse is the Republican Party. It remains Trump’s party as long as he keeps his grip on its voters and can defy the medical odds against an old man who eats badly and never exercises. Trump’s most fervent supporters in Congress, such as Representatives Mo Brooks, Matt Gaetz, Lauren Boebert, and Marjorie Taylor Greene, don’t even exist in a category of responsibility and blame: Their behavior is the political equivalent of not guilty by reason of insanity. Burns and Martin reserve their sharpest criticism for Republicans who know better—moral vacuities motivated by opportunism and power lust. These include lesser-known members of Congress such as Jim Banks of Indiana and Elise Stefanik of New York; the erratic Senator Lindsey Graham, whose only constant seems to be an insatiable desire for attention; and McConnell himself, who flirted briefly with principle in his comments on Trump after January 6, before finding safety in a refusal to say much of anything.

But the embodiment of Trump’s Republican Party, and the object of the authors’ undisguised contempt, is House Minority Leader Kevin McCarthy. He is willing to betray any vestige of truth, courage, and self-respect to stay in Trump’s good graces and therefore remain the party’s top contender for speaker of the House. At one point, Burns and Martin inform us that Trump took to calling McCarthy a “pussy,” and they add: “McCarthy responded not by defying the former president but by more or less setting out to prove him right.” One of the biggest scoops—McCarthy’s brief, private criticism of Trump and his congressional fanatics immediately after January 6—endangered all of the work McCarthy had done afterward to secure the godfather’s blessing. When McCarthy declared the story a falsehood of the liberal media, the authors produced an audio recording to confirm its accuracy. But McCarthy and his party are so lost in a miasma of tribalism and lies that this humiliation didn’t matter. He retained the support of Trump, who might share Burns and Martin’s disdain for McCarthy but who knows a useful tool when he sees one.

[Read: ‘We are living through a battle for the soul of this nation’]

This Will Not Pass raises a question that isn’t easy to answer: What is it about political power that leads people to desecrate themselves so nakedly in its pursuit? Speaker of the House is an important position, but what’s the overwhelming appeal of a career as a congressional backbencher, or as a committee chair gaveling endless meetings that achieve nothing in particular? The book’s Republicans hardly seem motivated by policy ideas, let alone by a desire to govern well in the public interest. They passed little substantive legislation when their party controlled Congress and the White House during Trump’s first two years. The most popular of them are nihilistic combatants in the culture wars whose chief skill is building personal brands. When the institutions of government hollow out, what’s left is the chase for these cheap gratifications, removing the last self-restraints from those in power.

Anyone who spends time in Washington encounters intelligent, capable, hardworking people who went into politics for relatively idealistic reasons and manage to resist its more corrupting temptations. The brighter lights in this book include some Democrats and a few Republicans who believe in self-government, understand the need for both principle and compromise, and are willing if necessary to take on their own side. None of them seems likely to ever get very far. Those picking up this book a few decades from now will have to confront the question of why a free people, in discarding their most promising leaders while elevating the likes of Kevin McCarthy, asked for their own destruction. 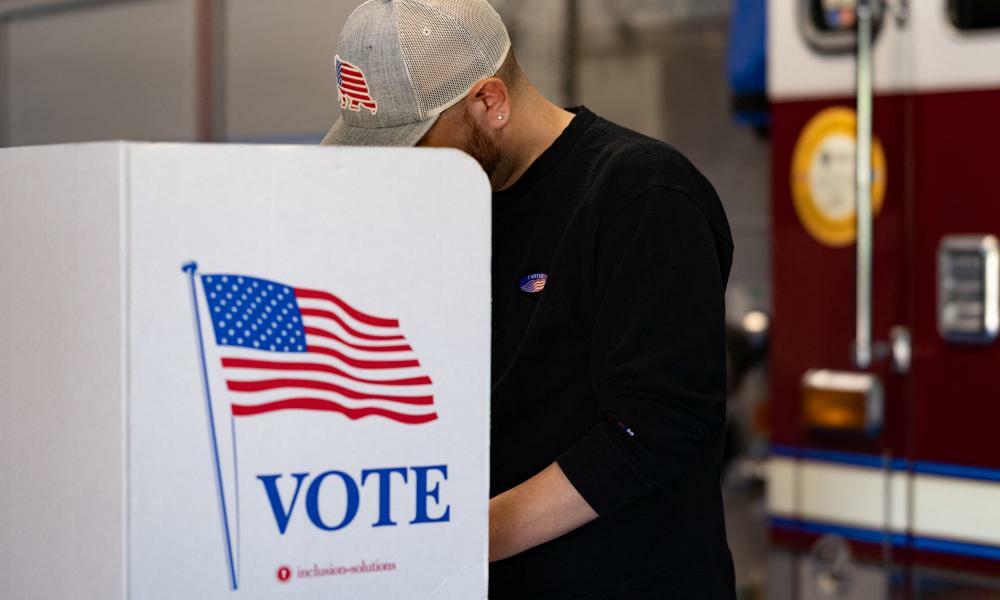 Irish Independent
US primary elections: Dr Oz tied with McCormick in test of Trump’s influence on Republicans – as it happened

Celebrity physician, who is endorsed by Trump, is currently behind in the Pennsylvania senate primary, but the race remains too…