The pallbearers who faultlessly carried the Queen's coffin during Monday's state funeral at Westminster Abbey and committal service at Windsor have been identified. The eight have been praised for carrying the 500lb lead-lined coffin on the Queen's final journey as billions of people around the world watched.

They have been named by MailOnline as eight soldiers from the 1st Battalion Grenadier Guards, and were flown back from operational service in Iraq to take part in the funeral.

The British Army has said that the eight men chosen were the 'very best soldiers' in the Company – and also that they were the eight tallest men in the Company, chosen for stature and consistent stability, and likely arranged shortest to tallest at the back.

The bearers, eight of a full bearer party of twelve, were led by Company Sergeant Major Dean Jones , from Long Eaton in Derbyshire, who is an instructor at the Royal Military Academy Sandhurst..

He is married with a child, but the guards behind him were very young; they included the 19-year-old Fletcher Cox from Jersey, who was awarded the Lieutenant-Governor's medal in 2018 while in the Army Cadet Force there, although the Ministry of Defence has elected to keep the pallbearers' names private.

Military leaders, politicians and celebrities have all backed calls for them to be made MBEs.

Here is what we know about the soldiers:

He expertly steered the casket behind their Company Sergeant.

The soldier from Kent was praised for his "impeccable" job..

He recently married his partner Hayley and they live in Aldershot - the garrison town in Hampshire.

He was a star of the London Guards before being transferred to the Grenadier Guards.

The youngest member of the team, the 19-year-old is from Jersey and went to Grainville School before joining the Army Cadet Forces [ACF] detachment.

The former Army cadet was awarded the Lieutenant-Governor's medal in 2018 - the highest honour a Jersey cadet can be given, leaving the Channel island at 16 to attend a military training college in the UK.

The keen bodybuilder attended the King Edward VI School in Bury St Edmunds, before studying at West Suffolk University, according to his social media pages.

He is a keen surfer when not serving his country. Friends praised his role when he proudly shared a picture of him carrying the coffin on Monday.

From Selston, Nottinghamshire, he was praised by his former teachers at Ashfield School for his role in the funeral.

Head teacher John Maher said he had executed his duties "so professionally".

A post on Selston Football Club's Facebook page read: "Respect to you Luke Simpson, flawless under pressure with the whole world watching on. You have done your country, village, family and friends proud!"

He lives in Morpeth, Northumberland and attended the town's King Edward Vl secondary school, before leaving at 16 to join the Army Foundation College in Harrogate.

By the time he was 17 he was stationed at the regimental headquarters of the Grenadier Guards at Wellington barracks, first joining the second battalion. He then moved to the first battalion, the Queen's Division, like his late grandfather John.

He hadn't told his parents beforehand that he would be a pallbearer, his father Peter, 56, told MailOnline: "The dignity and composure all those young men showed throughout that service was amazing and we're find it difficult to put into words how proud we feel of David.

"It was an incredible honour to be chosen for that role, the enormity of it is hard to comprehend, but David has taken it in his stride and performed his duty to perfection. It's nice to hear people saying that they ought to receive an honour but I know that David will simply say 'It was my duty' and he won't ask any more than that.

"Of course the fact that he'd been chosen was not to be shared with anyone, so he didn't even tell us, he couldn't. We only became aware of it when we saw photographs of the rehearsal drills and I said to my wife 'that looks like David." 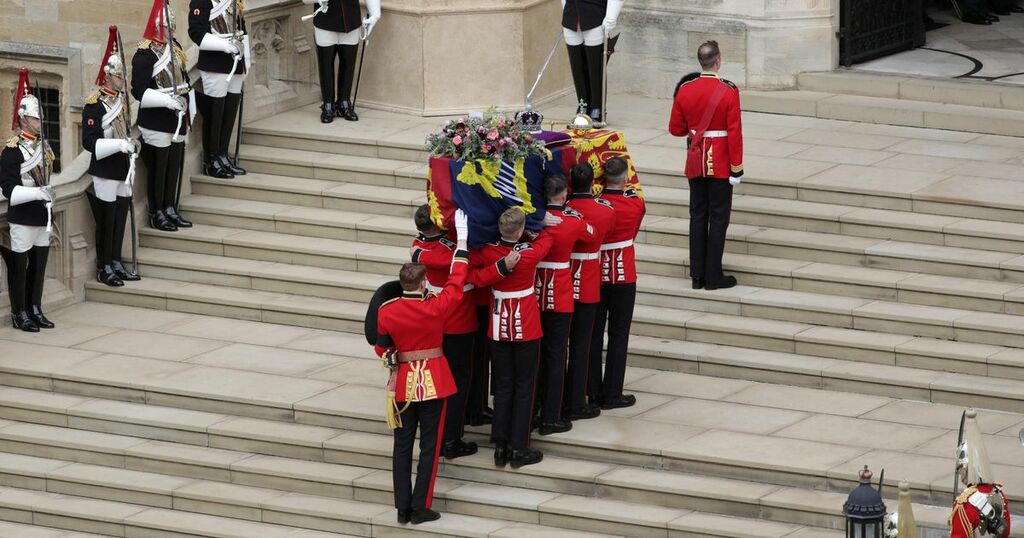 Hero pallbearers who carried Queen's coffin are pride of nation with 'nerves of steel'
The Queen's pallbearers from The Grenadier Guards, who carried the 500lb coffin up the 20 steep steps of St George’s…

Daily Mirror
From analysis to the latest developments in health, read the most diverse news in one place.
Brits demand Queen’s pallbearers honoured for carrying 'weight of world' on shoulders

Chronicle Live
One place to find news on any topic, from hundreds of sites.
'Beyond proud' mum of Queen's pallbearer had no idea son, 19, would carry coffin

The mum of David Sanderson, 19, from Morpeth, who carried the Queen's coffin during her funeral said she had no…