The problem with abortion ban exceptions

On October 21, 2012, a woman named Savita Halappanavar went to the hospital in Ireland because of back pain that had lasted for 12 hours. At 17 weeks pregnant, doctors had to deliver devastating news to her: she was miscarrying. Her pregnancy was, inevitably, not going to be viable.

The next day, her water broke, but her body didn't go into labor and expel the fetus on its own. Her family repeatedly asked for her to be induced, for the pregnancy to be terminated, but the doctors said they couldn't because there was still a fetal heartbeat — and in Ireland, at the time, abortion was prohibited, even in a situation like Halappanavar's, where the fetus was not going to be viable.

In Ireland, Halappanavar's tragic death led to an outpouring of public attention and anger. That ultimately led to the repeal of Ireland's Eighth Amendment, which effectively banned abortion.

In the likely event Roe v. Wade is overturned, many states will immediately make abortion illegal. Now, doctors and pro-choice advocates in the United States are fearful that scenarios similar to what happened to Halappanavar may be apt to happen in the United States.

"On nights like this I can't help but think of Savita Halappanavar, a beautiful 31 year-old dentist who died at 17 weeks pregnant after being denied an abortion in Ireland because it was illegal then," Jo Kaur, founder of the Riaan Research Initiative, a non-profit organization hunting for a cure for rare genetic diseases affecting children, tweeted when news of the SCOTUS opinion leaked last week. "She died of sepsis [because] they wouldn't abort. How many Savitas will die in the US?"

RELATED: Why did Ireland deny a suicidal woman an abortion?

In light of news about the leaked SCOTUS opinion, public attention is fixed on the estimated 13 states that have "trigger laws," meaning laws which would make abortion immediately illegal once Roe v. Wade is overturned. All 13 states with trigger laws technically have language that make exceptions to the bans for either pregnant females whose lives are at risk or "medical emergencies." But in some states, discretion in such a scenario would be left to the physician, in addition to other problems that could surface from the vagueness of the language in these laws.

For example, in Louisiana, the law states a "physician shall make reasonable medical efforts" to save the life of a pregnant person and the unborn child. In South Dakota, the law states that there is an exception for a medical professional to make a "reasonable medical judgment that performance of an abortion is necessary to preserve the life of the pregnant female" and the unborn child. While these laws have exceptions, there is a fear that they're likely to create hesitation from the physician — when in an emergency — that time can't be spared.

"Physicians will now be put in a position of trying to figure out whether the emergency is emergency enough," Kim Mutcherson, Dean and Professor of Law at Rutgers Law School told Salon. "I do think that there will be healthcare providers who are a little nervous about how to proceed and when to proceed, and there's something really disturbing thinking about a physician whose immediate thought is 'OK, the way to treat this patient is to give her the medication she needs, or to proceed with an abortion,' but then stops herself and says, 'Well, am I setting myself up for potential either civil liability or criminal liability?'"

"Medicine is more of an art than a science and so, it's hard if you are in a very aggressive atmosphere like Texas that is aggressively anti-abortion," Mohapatra said. Texas has a trigger law in place that would make performing an abortion a felony. "I think that providers are going to be reluctant to be the ones that are on the line for a $100,000 penalty and life in prison if they can't justify that it was going to save someone's life," Mohapatra continued.

"I'm very concerned that the overturning of Roe v. Wade and that the ensuing trigger laws will cause serious harm to pregnant people, especially for things situations like ectopic pregnancies," Simon said. According to Planned Parenthood, one in 50 pregnancies are ectopic.

Last year, Texas passed Senate Bill 8, which bans abortions as early as six weeks. While the law includes an exception for ectopic pregnancies, immediate available treatment hasn't been easy to come by. That's because the law prohibits several medications as abortion-inducing drugs; one of those drugs, methotrexate, is used to treat ectopic pregnancies. As reported by NPR, some doctors reported they received a letter from a pharmacy stating that it would no longer fill methotrexate in the case of ectopic pregnancy.

Dr. Melissa Simon, an obstetrician and gynecologist (OB/GYN) at Northwestern University, explained to Salon there are many immediate cases where an abortion is needed right away to save a pregnant female's life. For example, an ectopic pregnancy which is when a fertilized egg implants and grows outside of the uterus in the abdomen, a female's cervix or more commonly, fallopian tubes.

"I'm very concerned that the overturning of Roe v. Wade and that the ensuing trigger laws will cause serious harm to pregnant people, especially for things situations like ectopic pregnancies," Simon said. According to Planned Parenthood, one in 50 pregnancies are ectopic.

"This is a life threatening type of pregnancy whereby there is no way that an ectopic pregnancy can become a full-term pregnancy and a person cannot give birth," Simon added.

Simon noted there are many other reasons why a pregnant person's life could be at risk. For example, if a woman has Marfan syndrome, which poses a significant risk of transmission to the fetus and injuries that could cause death or serious injury to the pregnant female. Simon added women who have miscarriages could bleed or get an infection, and the treatment is an abortion.

"I have been in many circumstances with many women who have delivered the babies or who had, regardless of the gestational age, bled profusely, hemorrhages... and if we didn't intervene, they would have died," Simon said. "It is really critical to have abortion as part of safe, comprehensive, high-quality maternity care. It's part of the whole continuum of maternal maternity care."

Indeed, while the trigger laws technically have carve-outs, the fact that such an essential part of maternity care is going to be prohibited will inevitably put more pregnant peoples' lives at risk. One study from the University of Colorado-Boulder estimates that pregnancy-related deaths could increase by 21 percent in the event of a nation-wide abortion ban.

Mutcherson said it is "deeply problematic" that state legislatures who aren't healthcare providers are making such decisions that could impact peoples' lives.

"The legislatures, all of the people that that we have elected to Congress in the Senate, really need to hear this because right now we're at a critical juncture," Dr. Simon added. "Our country, which is deemed one of the best healthcare systems on the entire planet, has the worst maternal mortality rate of any high resourced country on the planet,  and that is just egregious already... so having a decrease in access to this very safe part of the full continuum of maternity care, completely banned in more than half the states is dangerous, and will only promulgate those maternal mortality numbers."

Read more on the Supreme Court leak and the end of Roe v. Wade: 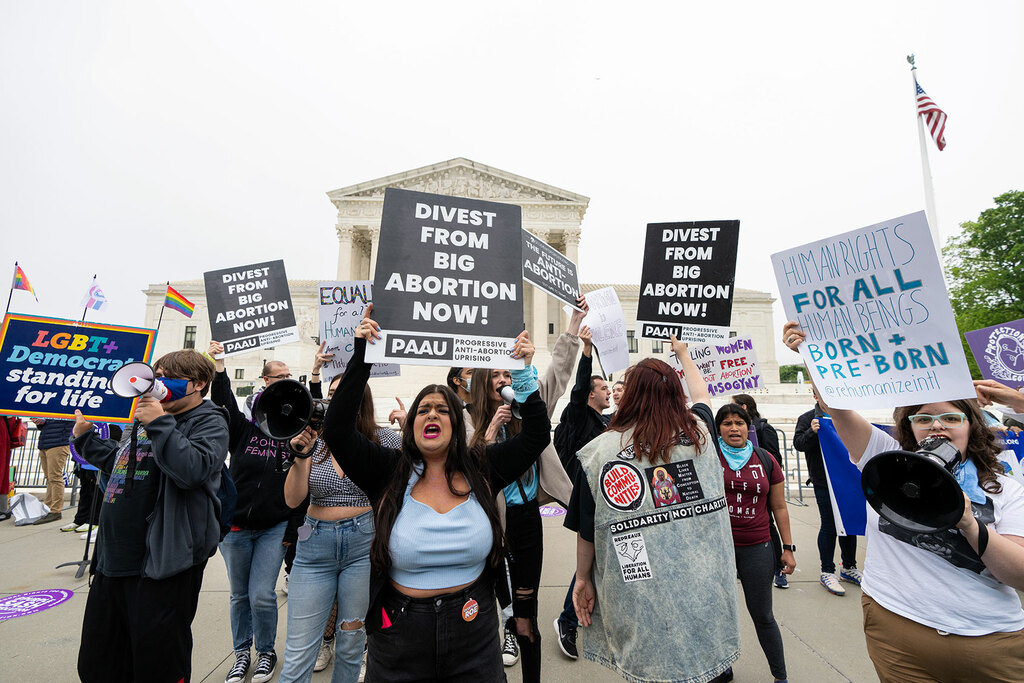 Salon
One subscription that gives you access to news from hundreds of sites
As Roe decision looms, Kentuckians prepare for abortion ban

WEKU
Commentary: Pregnancy is risky. Losing access to abortion puts women’s lives at stake
As the United States struggles with the imminent demise of Roe v. Wade, politicians and voters need to remember one…