‘The most amazing link to our history’: the farmers reclaiming their heritage one seed at a time

The walls of Bonnetta Adeeb’s basement in a suburb of Washington DC are lined with album covers, African art, musical instruments and – a more recent addition – shelves filled with hundreds of boxes of carefully labeled seeds.

At the outbreak of the Covid-19 pandemic, Adeeb and her students at Steam Onward – a non-profit engaging underserved young people in gardening projects – were looking for ways to support their communities.

At the same time, farther north in Philadelphia, the Experimental Farm Network invited growers, including Adeeb, to Zoom calls. “It was clear very early on that [Covid] was going to be a massive disruption to the way we live and that people were going to need support,” said Nate Kleinman, co-founder and co-director of the network.

The organization that emerged, the Cooperative Gardens Commission, decided to focus on seeds – and making sure Americans had access to them. By April, volunteers based in Philadelphia were mailing seeds donated by seed companies to smaller distribution sites across the country – including the one in Adeeb’s house. Her basement was transformed into a seed hub. Her students began mailing out the seeds and even planting gardens in their elderly neighbors’ back yards.

They received about 140 seed varieties, said Adeeb, but she quickly noticed a problem. They “were not necessarily foods that our Bipoc communities were requesting. They’re not things that people eat,” she said. There were no collards, okra, or bok choy.

So Adeeb and her students began talking to their neighbors, and then with farmers across the country, to figure out which seeds were culturally meaningful to them – and where to buy them.

The resulting alliance of Bipoc growers became the Ujamaa Cooperative Farming Alliance. Ujamaa means “cooperative economics” in Swahili and takes its name from one of the seven principles of Kwanzaa, a wintertime holiday celebrating community.

The alliance is working not only to provide the seeds its neighbors want but it is also tracking down old or rare varieties of seeds to grow.

“The mission of Ujamaa is to recover and reclaim our culture or heritage, steward it and make sure that it’s available to future generations,” Adeeb said. She wants to support growers of color to have more agency over their food and develop more resilience for future crises.

‘The most amazing link to our history’

Growing up Adeeb heard lots of stories about food – “my family has been farming since 1710 in this country” – but the one she heard most often was about a watermelon that grew so successfully her great-great-uncle’s daughters didn’t have to leave home to work.

Most Black girls had to work as maids after slavery, Adeeb said, but “the number one most dangerous place for a Black child to be was in the home of a white family”. Because their parents were successful farmers, Adeeb said, “the girls were not abused”.

She asked her 90-year-old cousins to describe the watermelon – the color of its rind, the taste of its fruit – and tracked it down. When she finally got a packet of the seeds, she said, “I cried, I cried, I cried, I still cry, that we found this most amazing link to our history.”

Adeeb, a retired teacher who has always centered food in her work, wants to keep spreading awareness of the importance of these cultural and historical links to food.

After setting up Ujamaa, she invited the Experimental Farm Network’s Kleinman to join its board and asked him, as she asks everyone, to consider which seeds were culturally important to his ancestors.

Kleinman knew immediately: grains. “I’m eastern European, Jewish primarily, and I know that one of my great-grandfathers was a miller and a baker back in Romania.”

At the time there were laws against Jews owning farmland, he said, so “it was grains, it was milling and baking that gave him and his siblings and his parents the resources that they needed to cross the ocean and give my family a new life – and save us from the Holocaust that was coming just a couple decades later”.

In the hope of sourcing more “culturally relevant seeds” themselves, the Cooperative Gardens Commission began buying seeds that communities were asking for instead of relying solely on the donations of seed companies.

‘Food is not a privilege; it’s a right’

Within a year of the Ujamaa Cooperative Farming Alliance starting, Adeeb’s students had installed 50 gardens in their communities.

The alliance has partnered with farmers across the US – from Oregon and Washington to Kentucky and North Carolina. Some of them are growing seeds mailed directly from Adeeb or her students, while others have been growing plants for years that they are now contributing to Ujamaa’s seed library.

Sonya Harris plants Ujamaa’s seeds at the Bullock Garden Project in New Jersey, which stocks school gardens with vegetables. The project operates largely in low-income neighborhoods where communities turned to the gardens for food in the early days of the pandemic. Harris, who met Adeeb at the first gatherings of the Cooperative Gardens Commission, wants to help people develop food sovereignty by growing their own food from seed. “Food is not a privilege; it’s a right,” she said.

Harris is also keen to connect children to plants with difficult histories. “I am big on reclaiming cotton,” she said. She wants to show children the reality of the plant – how sharp the crop was that children their own age were expected to harvest – but also how their ancestors developed the plant.

“When we talk about the plants that made the money for the slave holders, I feel that that seed belongs to the African people and the Indigenous people. The people whose land it was stolen from and the stolen people who had to take care of it,” Harris says. “Why is there this shame to grow a crop that we developed?”

By teaching Black children to grow cotton, Harris says she wants to inspire the future growers of this plant – who might find a way to help it survive drought or long winters, whatever the climate crisis brings.

Tomia MacQueen, another grower in Ujamaa’s alliance and founder of Wildflower Farm in Pennington, New Jersey, is using the network to help her find the turnip greens that her grandmother grew up eating.

Raised in Detroit, MacQueen thinks a lot about access to healthy and culturally appropriate foods in cities. She met Adeeb for the first time at a meeting of the Northeast Organic Farming Association, where Adeeb was discussing seed braiding – the way West African women braided seeds into their and their children’s hair before they were brought to the Americas as enslaved people, so they would have foods they knew – like okra, peas and greens.

She wants more people living in low income neighborhoods to have choices over the foods they eat, especially the option to eat the foods that kept their ancestors healthy. “For me, a huge part of what Ujamaa is doing is about self sufficiency,” says MacQueen. “If you can’t feed yourself, are you really free?” 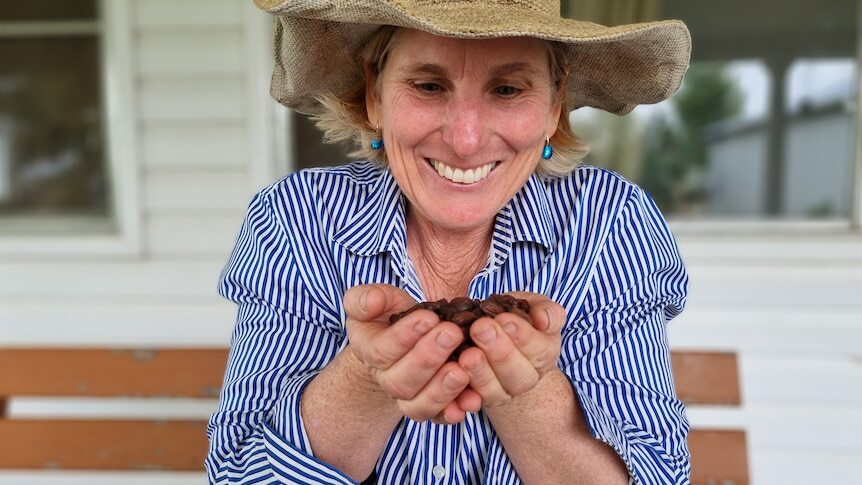 ABC News
One subscription that gives you access to news from hundreds of sites
A bite of history: the growers preserving Australia’s heirloom apples

While a few varieties dominate supermarket shelves, Australia is home to more than 200 kinds of apple – with huge…

The Guardian - AU
When her son died, a woman turned to gardening. Now, she feeds her entire community

Jenna Fournel lost her son in the fall of 2019. To keep his spirit alive, and connect with her community…