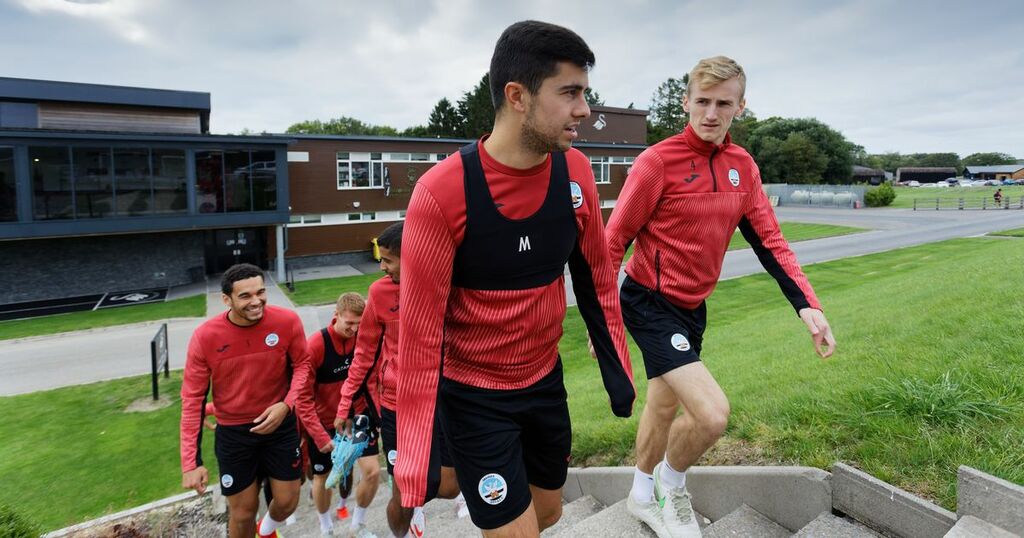 Russell Martin will have significantly greater options to select from when Swansea City host Hull City on Saturday afternoon.

The Swans' squad was decimated by a combination of injuries and Covid-19 cases in August.

However, ahead of the clash with the Tigers this weekend, Swansea have been significantly boosted on the training ground.

New signings Olivier Ntcham, Rhys Williams and Michael Obafemi will all be available to make their debuts against Grant McCann's side.

Of those three recruits, only Obafemi has played this season while Ntcham - who was unattached before moving to south Wales - trained alone at France's national facility last month.

"Olivier's the only one who has been training on his own," said Martin.

"He's trained in Clairefontaine at the national academy in France with a few other players and full-time fitness coaches so he's been really committed to his training.

"I expect all of them [signings] to be available for Hull."

However, they resumed training at Fairwood last week and are also in contention to lineup against Hull.

"They both look like they've been through the ropes with Covid," admitted Martin.

"They're slowly coming back to where they need to be, they've been feeling the effects of it and they're quite tired. They both had quite a lot of symptoms so it's been tough for them.

"But it's great to have them back. They're both young hungry players.

"Ben has been great. We really missed him. He was getting better and better, stronger and stronger in every game.

"Flynn, in the first two games, we could see what impact he's going to have."

Meanwhile, Liam Walsh has also stepped up his recovery from a hamstring injury.

The central midfielder sustained the problem in Swansea's final pre-season fixture against Southampton on July 31 - the day before Martin was officially unveiled as the club's new head coach.

And while he may not be thrown in at the deep end against Hull, Martin is pleased to have the former Bristol City man in his ranks having missed out on the chance to see him in action so far this season.

"Walshy's back training, it's like a new signing for us," explained the Swans boss.

"It's been a real positive to see him back on the training pitch. He is an excellent footballer so we're really looking forward to working with him because he really suits what we want to do.

"We have to take care of him and manage him because he's had a tough time, so we need to make sure he's ready."

And on Korey Smith - who has been out of action with a calf injury - Martin commented: "Korey, he's feeling knackered after the birth of third child, so congratulations to him and his partner. Everyone's really pleased for him.

"But he's coming on nicely, he's working really hard in the gym. We hope to have him back before long."

The international break has provided Martin and his coaching staff with some much needed time on the training ground with Swansea's squad.

It comes after the Swans played seven matches in just 21 days.

"Now it's about getting the guys conditioned to how we want to play, getting them fitter over this period of time," concluded Martin.

"The fitter we become, the easier it will be to play the way we want to play. They understand that process, they're really up for it.

"We're really enthused by being able to get on the training pitch and do some work with the guys. It's been a tough period of so many games so we need to maximise the amount of time we have now."