The Little Chapel That Stood: a hub for 9/11 relief, 20 years later 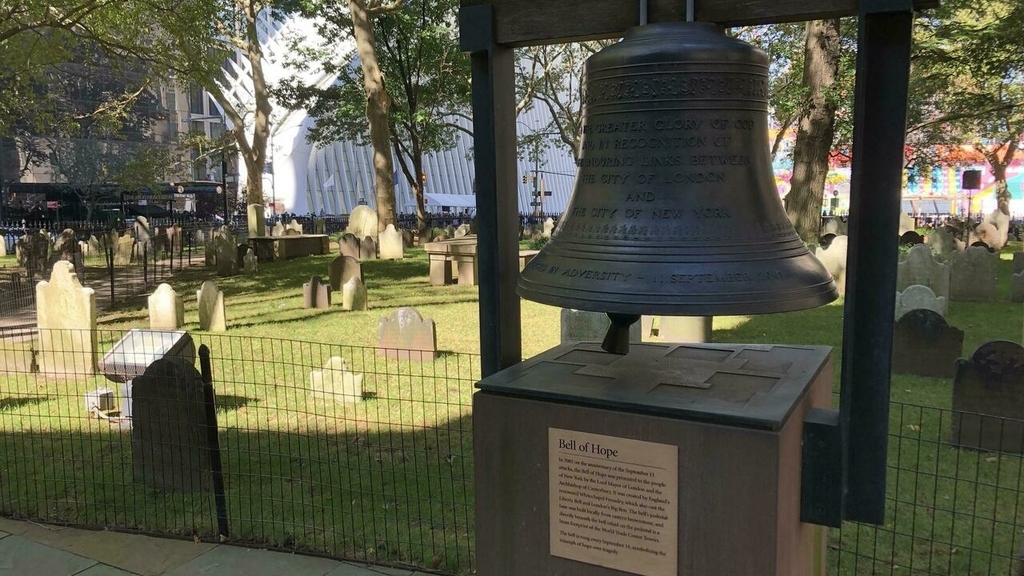 Despite being mere metres from the World Trade Center, St. Paul’s Chapel survived the attacks intact and became a 24/7 hub for relief efforts. Twenty years later, the chapel once again aims to offer a space of “hospitality and healing”.

St. Paul’s Chapel, which stands directly opposite the World Trade Center, is the oldest public building in continuous use in New York City. Built in 1760 as a parish of the neighbouring Trinity Church, the chapel survived the American Revolution and the Great Fire of 1776, which destroyed much of the surrounding area. It has welcomed US presidents spanning from George Washington to George H.W. Bush.

Yet perhaps the most trying chapter in the church’s history began at 8.46am on September 11, 2001, when American Airlines Flight 11 struck the World Trade Center’s North Tower. Within two hours, both of the towers had collapsed, devastating the area and leaving thousands dead in the rubble. Another neighbouring church, St. Nicholas, was among the buildings destroyed.

St. Paul’s, miraculously, was virtually unblemished. Just one pane of glass was shattered by the dust and debris that rained down, earning St. Paul’s the moniker “The Little Chapel That Stood”. In a ceremony Saturday morning marking the twentieth anniversary of the attacks, Bishop Andrew Dietsche attributed the chapel’s good fortune to the trees sheltering its cemetery.

The church’s members did not spend much time counting their blessings. Instead, they turned St. Paul’s into a 24/7 relief hub, providing food, supplies and counselling to first responders and local residents for more than eight non-stop months after the attacks.

James Melchiorre, who works on the church’s media team, was volunteering at the time at another site nearby. What struck him most is how many people kept streaming in at all hours of the day and night.

“I was working the overnight shift,” Melchiorre says, from 11pm to 7am. “We were cooking and putting food out and I remember thinking, well, it’s going to slow down around three, right? It never slowed down.”

Lower Manhattan was consumed in the recovery efforts, but also a profound sense of mourning. The 343 firefighters killed in the attacks received especially memorable tributes, Melchiorre says.

“For days and weeks afterwards, there would be these elaborate funerals with the bagpipes and everything,” he recalls.

“The other thing I remember is, everywhere you look, every flat surface, there were pictures of the missing,” Melchiorre continues. “People were, in the early days, desperately hoping that maybe they had survived. There would be a picture and they would say, she has a tattoo on her left ankle…”

Among those helping to sift through the still smouldering remains of the towers and recover the bodies of the victims was Angel Rodriguez, a sanitation worker from the Bronx. Now retired, Rodriguez, 79, spent 52 days at Ground Zero and still finds the devastation hard to explain.

“You see so many people crying, you know, guys from the Fire Department crying like a baby, pulling bodies out,” Rodriguez recalls. The seven weeks he spent working at the site left him feeling “depressed”, he says, but if there was one upside, it was that “everybody was together”.

Rodriguez wore a professional-grade mask throughout the recovery efforts and has so far been spared any noticeable impacts on his physical health. Others who spent time around Ground Zero right after the attacks have not been so lucky.

Cynthia Moten was in her apartment in Battery Park, a few blocks from the Trade Center, when the first plane hit.

“I describe it as the loudest noise I’ve ever heard,” she tells FRANCE 24.

She turned on her television to find out what was happening. When the second plane struck, she realised it was not an accident and prepared to leave her building.

“While I was on the elevator, the first building came down, and the elevator stopped,” Moten says. “Luckily, it stopped on a floor. But the thing is, we have windows on the floor. And when I got out of the elevator, it was black. I couldn't comprehend what happened. Did I get knocked out? Is it nighttime?”

When she got out, the area was covered in ash.

“It was light gray, I guess it looked like snow,” Moten recalls, except it was strewn with “shoes and eyeglasses and papers… It’s really hard to even remember it.”

Moten returned to her apartment after spending about a month in a hotel, and stayed there as Ground Zero kept burning for months longer. She has since been diagnosed with chronic sinusitis and gastrointestinal damage, and her care is covered under the World Trade Center Health Program.

For the twentieth anniversary of 9/11, St. Paul’s Chapel began its weekend-long commemorations at 8:46am with a ringing of the Bell of Hope, as it has done every year since 2002. St. Paul’s received the bell that September as a gift from its sister church in London.

Throughout Saturday, visitors filtered through the church to pay their respects.

Firefighters Jamie Monroe, Glenn Smith and Joel White cycled all the way from California to attend this year’s 9/11 commemorations. Along with nine other members of the group Fire Velo, they pedalled for 40 days across the country to raise money for firefighters with cancer and other health conditions.

“It’s a really emotional deal for us,” says Glenn Smith, 59 and retired after 31 years at the Los Angeles County Fire Department. “We’ve stopped at various different memorials, and you hear… the process of what actually happened. And it reaches in you and it grabs you.”

“One of the things I noticed is when we were cycling through some of these communities, there was no politics, there was no Republican, there was no Democrat,” adds Joel White, 63 and retired from California’s Marinwood Fire Department. “Everybody supported… they stood and they waved or they clapped, or they said, ‘Do you need anything? What do you need?’ And that was that was really good to see this country right now.”

Sam Trujillo, a fellow retired firefighter from Albuquerque, New Mexico, is also hopeful that the tributes can be a source of reconciliation. Trujillo, 75, retired in 1985 but returned to serve after 9/11 as part of a federal task force responding to the attack on the Pentagon. He has come to New York for several commemorations over the years, to honour what he calls the “brotherhood” of firefighters. This year, for the first time, he brought his son Joe, who is retired from the military.

Reverend Matt Welsch, 33, one of the newest priests at St. Paul’s, says the church’s goal is to offer a space of peace as the US remembers a day when “all of us were changed”.

“St. Paul’s chapel was such an important healing presence during the aftermath of 9/11,” Welsch says. “So we’re trying to re-invoke that spirit of hospitality and healing by providing a space for people to come back.”

“All of us were changed, whether we realise it or not, by the events of September 11,” Welsch says. And while the attacks brought many changes for the worse, fuelling a global cycle of war and bloodshed, Welsch says, “there is something beautiful about the fact that we have communities of faith and other forms of community that remain constant and provide a sense of structure, and support, and hope, in the midst of all the changes”.