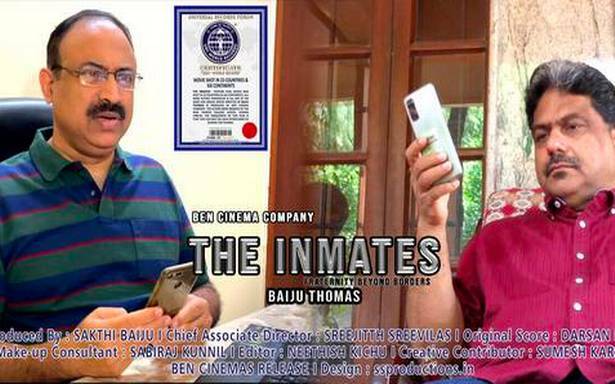 A two-hour feature film with 32 cameramen! Unlike the proverbial broth spoilt by too many cooks, The Inmates, a Malayalam film released on OTT platform www.bcineet.com on October 1, is a celebration of friendship. Thirty-two men in their late fifties from all over the world came together to make the film helmed by film director Baiju Thomas. Baiju was the director of films Muthu Kudayum Choodi (1989) and Padaliputram and serials.

Beginning with a prayer by their former warden Alexander Jacob, who retired as DGP, the film has all the cast acting as themselves. The joie de vivre and camaraderie they experienced during its making comes alive as they recall the circumstances that culminated in the film.

Nearly 40 years ago, all of them were hostellers of St Thomas Hostel of Mar Ivanios College, Thiruvananthapuram. They did their pre-degree, as Plus Two was known then, between 1980-82 and lived as family for two years.

Says one of the old boys, Sabu Thomas, now a software engineer and entrepreneur architect in the US, “After pre-degree, we went our ways. I came to the US for my studies and lost touch with most of them. During lockdown, I tried to locate the 60 hostellers with whom we had shared many memorable days. Each of us was in touch with four or five of the men and soon most of us were on a WhatsApp group.”

Most were eager to renew the bonds forged in their teenage years. They decided there would be no forwards but only voice messages in the group. “Soon, we were familiar with each other’s voices and what everyone was doing. We met virtually and kept in touch. Zoom meeting became a regular feature. As we were settled in different continents, the time zones meant that some of us were at work on certain days. Yet, we made time to catch up,” recalls Mahesh Nair, an auditor in Kuwait.

Many of them recall being surprised to see the changes in each other. During one such meet, Dr. Aji Koshy, a dentist in Al Ain, UAE, joined them while he was in his clinic. In his mask and PPE kit, he could not be recognised until he identified himself as Aji.

That was when Baiju thought he had the thread of a plot to be made into a film. He asked his friends if they were game for a film shot during the lockdown. “It was an idea about identity theft, which has assumed alarming proportions in many countries. Since I had already worked in cinema, I knew what had to be done and all of them trusted me,” says Baiju, who now teaches screenplay writing and direction in the US.

Those willing to act in the film were told to record their own scene and come up with their dialogues. Baiju told them the subject they had to talk about and then improvised.

“Baiju’s maiden film had been released in theatres in the late eighties while many of us were still doing our higher studies. We put our faith in him. Although we had no clue what the story was about, each of us acted our scenes. The scenes were shot by our family members,” says Dr Oommen MG, a homeopathy practitioner in Kozhikode.

Sanil Raj Johnson, former academic Dean at St Thomas College, Thrissur, recounts how he was told to talk about crypto currency, while another person spoke about how he had lost money in a fraud. Yet another friend spoke about his fascination for late actor Jayan.

“We did wonder how he would make all this into a story,” recalls Mahesh.

As most of them held senior positions in their field of work, Baiju did not want any of them to play villain. One of their hostel mates, an officer in the Indian Administrative Service, did not even act as he was not sure about the service rules regarding such work. “So, I decided to play the villain. The story begins during one of the Zoom meets when a couple of the friends realise that an impostor had taken the place of their friend, Baiju. Concerned about what had happened to him, they launch an investigation to find out the truth,” narrates Baiju.

At the end of the shooting endeavour, Baiju had about 90 hours of scenes to be tailored into a film. In January 2021, he came to Thiruvananthapuram for the editing, colouring, re-recording and so on. He says this must be the only film with a minimal crew of five persons, which included Sreejith Sreevilas as associate director, Sabiraj Kunnil as make-up consultant and Neethish Kichu as editor.

Baiju has also cast some of the family members of his friends in the film. A song written by the late S Rameshan Nair, composed by Darsan Raman and sung by KJ Yesudas, which was to have been used in Baiju’s film Padaliputram, was used in a crucial moment in the film.

Says Chennai-based entrepreneur Vinod Kumar: “When the film was released, we were amazed to see how it had shaped up, with even a song by Yesudas. I had met Baiju when he came to Chennai for post-production work and we shot a couple of scenes in my house. As all the camerapersons and actors living in more than 20 countries were amateurs, we never expected a film like this.”

Sabu says the experience evoked nostalgic for the hostel mates as the hostel building has been replaced by an auditorium.

Currently, an upbeat Baiju plans to send The Inmates to film festivals as such a movie would be a unique experience for viewers.