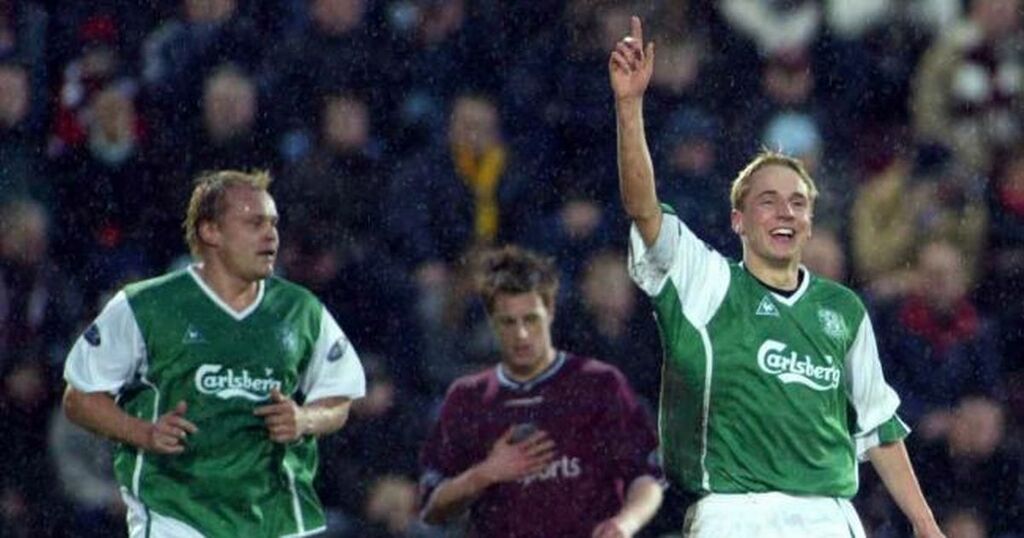 Rules for an Edinburgh derby at Tynecastle: Don’t get caught up in the occasion, never think the game is won, check the roof of the away dug out is in good order .. and avoid organising a night out until after the final whistle.

How I wish someone had given me that sage advice when what should’ve been my greatest moment in Gorgie very quickly turned into my worst.

I honestly think Hibs will win this Sunday. But going back to commentate will bring back some pretty wretched memories.

In particular the words ‘Happy New Weir’ will haunt me and my team mates for the rest of our days due to that 95 minutes in Gorgie on January 2, 2003 that ended 4-4.

I had been taken off with a couple of minutes to go. I’d played well, scored my first and only derby goal with a header and the boys were leading 4-2.

Job done. Or so we thought.

It was the New Year derby and I’ll not lie, I was sitting in the dugout with a grin as wide as Gorgie Road thinking about the team night out we’d organised for right after the game.

This was a Thursday night and I was hoping Bobby Williamson might let us off the leash until Monday after a derby win at Tynecastle.

Next thing you know my thoughts are brought crashing back to the here and now: Bang, goal. Bang, goal. Graham Bloody Weir!

He hit us a ridiculous two goal sucker-punch in the 93rd and 94th minutes. I don’t think he ever scored a goal for Hearts again after that!

I’ll never for the life of me forget the scenes. The Hearts fans who hadn’t deserted the ground minutes earlier flooded onto the park.

Others were battering the top of our dug out so hard the plastic roof came in on it.

It was utter pandemonium and I made a beeline for the away dressing room. Not that it got any better in there. Certainly not for poor Yannick Zambernardi who caused both those goals.

Bobby Williamson was quite a mild-mannered guy. But he went full Alex Ferguson in the dressing room, picked up a boot and threw it at the defender.

Where David Beckham got a cut on the eye after Sir Alex threw the boot in, I dread to think what would have happened to Yannick if he’d not ducked in time to avoid this missile!

Suffice to say we are still waiting to have that New Year knees-up from 2003. Bobby had us back in for training the next morning.

And even now, 18 years on, I get Hearts fans walking up wishing me a Happy New Weir.

Lessons galore there then for the current Hibs side ahead of the trip across the capital this Sunday.

This game means everything to both sets of fans. It doesn’t get any bigger. And thankfully it wasn’t all bad for me. While my Tynecastle record was rotten - I never won there once - it was a whole lot brighter back in Leith.

Just a few months on from the 4-4 draw we beat them with a Garry O’Connor goal in the last minute despite playing for 70 minutes with 10 men.

The noise at Easter Road was phenomenal that day. And it’ll be the exact same across the capital this weekend.

It’s important Hibs don’t get caught up in the atmosphere. It has a way of sucking you in especially at Tynecastle where their fans are right on top of you.

But Hibs have nothing to fear.

Martin Boyle is key and with his pace he can really get at the Hearts defence. Hopefully his niggle picked up with Australia is nothing more than that.

Hibs need to play football, avoid getting caught up in a battle and it turning into an arm wrestle because that’s what Hearts want.

They are strong physically but Hibs have the better football in them. So long as they work hard and don’t get bullied then their quality will hopefully shine through.

It’s an absolutely massive occasion and I can’t wait. I’m there working for Hibs TV and, while I’ll probably need a balaclava, I wouldn’t miss it for the world.

To win this one would set either side up for a right good season and also pop the other’s bubble.

Hearts have brought in good players.

But if Hibs go and play their game they can and should win the game.

Then they can go and paint the town green.