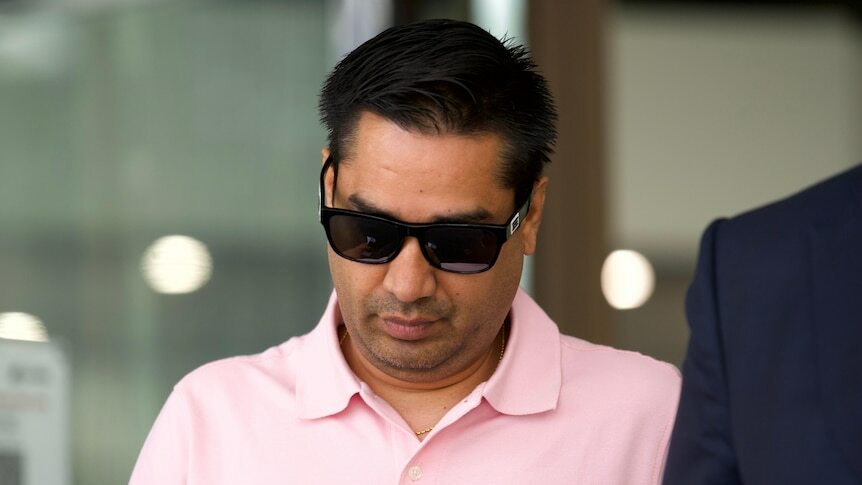 Police have indicated they may be seeking a jail term for a Perth bar owner if he is convicted of "serious" breaches of COVID laws by allowing almost 300 revellers at a New Year's Eve party to dance without wearing masks.

Vinod Parihar, 41, the licensee and owner of The George bar in the CBD, was charged after police were allegedly confronted with blacked out windows and locked doors when they tried to get into the venue about 11.00pm on New Year's Eve.

Another man, 25-year-old Farooq Latief, was also charged. He is alleged to have organised the ticketed event, which happened in the midst of the backpacker Delta outbreak in Perth when masks were mandatory indoors and dancing was banned.

The case was due for its first hearing in the Perth Magistrates Court on Wednesday.

Mr Latief, who represented himself, attended, while Mr Parihar did not, but he was represented by a lawyer Michael Perrella.

During the hearing, police revealed that both men were present at the New Year's Eve event, which was first attended by police responding to a noise complaint about 10.00pm.

Senior Constable Ray Lee told the court that while the front doors were locked, they managed to get inside via a side laneway and saw "a large number of people seated and standing who were not wearing masks".

Senior Constable Lee said Mr Parihar was given a warning about non-compliance with COVID restrictions before the officers left.

The court heard they returned about 11.00pm after another complaint but this time there were black curtains over the windows and despite repeated calls to be let in, they had to scale a locked gate to get into the premises.

By the time the officers got in, Senior Constable Lee said the majority of patrons were seated.

But CCTV footage, which was seized, showed there had previously been a lack of compliance with COVID rules, including mask-less people dancing on tables.

He also said there was evidence QR code check-in posters had been removed and some were found in the bin.

Senior Constable Lee described the allegations as "deliberate wilful offending", which was at the "highest end" of the scale and he noted that other recent instances of people breaching COVID rules had seen jail terms imposed.

Mr Perrella indicated his client would be disputing the allegations against him, saying he was not the organiser of the event and had only intended to provide a venue to his co-accused "for a small birthday party."

However Mr Perrella said many more people than Mr Parihar expected had turned up and "it essentially became a gathering that was unmanageable."

Mr Perrella told the court that CCTV footage showed his client trying to enforce mask-wearing and he also claimed the windows were covered and the doors locked to prevent more people from coming in.

Due to the seriousness of the allegations, Magistrate Matthew Holgate decided to place the two men on bail, with conditions that they surrender their passports and not attempt to leave Western Australia.

Mr Parihar attended court on Wednesday afternoon and appeared before the Magistrate to finalise his bail conditions.

He made no comment as he left the courthouse.

Both men will face court again in late February.