The Fire That Burns Inside Klay Thompson 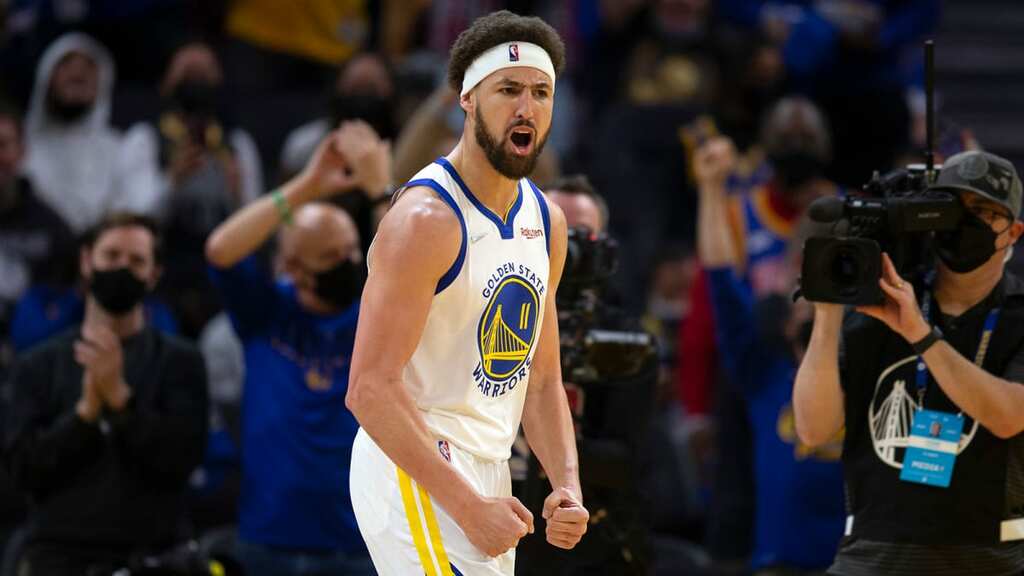 Last November, on the 882nd day of his involuntary basketball sabbatical, at halftime of the 148th straight game he’d be forced to miss, Klay Thompson settled into a folding chair to assess the Warriors’ past, present and future. The question put to him was broad, and Thompson would soon get to his answer. But something else was bothering him.

“Also, about that top 75 thing,” Thompson said, interrupting, “it’s like: How many records, shooting-wise, do I have to break to be considered one of the greatest shooters—” and then he stopped himself. “Like, whatever. It’s in the past, man.”

His irritation was palpable, and understandable. Three weeks earlier, the NBA had announced its 75th Anniversary Team, the so-called “75 greatest” list, a club more exclusive than the Hall of Fame, an honor every living NBA star coveted—Thompson included. (I’d mentioned right before our interview that I was among the NBA 75 voters, that I had in fact put Thompson on my ballot and was sorry to see he didn’t make it.)

His case was stout:

The world got a happy reminder of all that Thompson can do this week, when he returned at last to the Warriors' lineup after a two-and-a-half-year rehab from knee and Achilles surgeries. The gorgeous three-point shot? Still there. The aggression? Most definitely. The dedication to defense? Check.

The return of Golden State’s other Splash Brother means the Warriors are finally whole again, fully loaded for another deep playoff run, and primed to prove their dynasty—prematurely eulogized when Thompson and Kevin Durant went down in the 2019 Finals—is very much alive and demanding your respect.

Conveniently, on that note, the Klay comeback tour lands in Milwaukee on Thursday, where the Warriors will face Giannis Antetokounmpo and the defending champion Bucks. A Finals preview? Perhaps. A Finals matchup that anyone dared predict last summer, when Thompson was still rebuilding his right Achilles, and the Warriors were coming off back-to-back lottery appearances? Not hardly.

Which brings us back to Klay’s annoyance and defiance on that November night, when we met at halftime of the Warriors-Timberwolves game at Chase Center. Our conversation was brief, maybe 10–12 minutes, but it revealed so much about how Thompson is wired, why he’s been so essential to the Warriors’ dominance—and to the potential titles yet to come.

It wasn’t just the NBA 75 snub that was bothering him. It was, well, everything. The Warriors’ absence from all those preseason Finals predictions. The snide dismissiveness of pundits as the Warriors raced to a 9–1 start. This nagging sense that the world had just sort of moved on from the Warriors during their so-called “gap” years, during which they lost Durant, shed key veterans and watched Thompson endure two of the worst injuries an NBA star can have.

While the Warriors quietly healed and retooled, the Lakers and Bucks took home Larry O’Brien trophies. The Suns and Jazz seized power in the West. The Nets constructed a superteam. Nikola Jokić became MVP and Luka Dončić became the league’s new darling. The Lakers got more contender hype for the addition of Russell Westbrook (ill-fitting though he was) than the Warriors did for their expected addition of well, Klay Thompson.

“I love it,” Thompson said that night, in a distinctly vengeful tone. “I hope people keep doubting us.”

But it was nothing compared to his ire at the NBA 75 slight. Klay Thompson, who might be the chillest star in the NBA—the guy who finds his daily zen by boating across the San Francisco Bay and playing with his dog—was practically spitting venom. He was upset at not making it and, frankly, upset about some of those who did.

And on it went.

Those remarks—perhaps his most revealing of our entire conversation—are not on tape, because they came before our interview officially began. My recorder was off. By any standard journalism definition, we were off the record, simply making small talk. And when Thompson unexpectedly veered back into the rant during our interview (see the quote above), I considered that off-record, too.

But with Klay’s return approaching—and in light of his addressing the topic briefly with NBA TV last week—I reached out through team officials, to ask if he’d be O.K. with me using the few quotes I had on tape and paraphrasing the rest. The word came back: Yes, he says it’s O.K.

Why ask to publish them now? Because that fiery soliloquy revealed so much about what makes Klay Thompson so essential, so valued, so universally adored across the league. The value he places on winning, first and foremost. The pride he takes in his defense. The competitive passion that simmers beneath that perpetually chill façade. These are things every NBA player gives lip service to but few actually live.

It was evident in the rest of our conversation, about the Warriors’ young prospects, as Thompson repeatedly emphasized the importance of winning and “learning how to win” over stat-chasing or All-Rookie honors. “Basketball, it’s very individualized by the media and fans. But at the end of the game, it’s a team sport. And banners are timeless,” he said.

There’s a reason why Thompson got multiple standing ovations Sunday night at Chase Center, why his teammates all wore his No. 11 jersey in warmups, why an injured Draymond Green insisted on being in the starting lineup (to play just 7 seconds) and it’s why NBA TV’s Stan Van Gundy hyperbolically proclaimed that Thompson’s return “is bigger than the game itself.”

Half the league, it seemed, was tweeting about Thompson’s comeback as it unfolded.

“Even if you hated the Warriors, you love Klay,” NBA TV’s Greg Anthony said on the broadcast.

And then Sunday, the airwaves and Twitter streams were filled with adoration for the guy who for two long years seemed almost forgotten. Think about what was lost: another two All-Star appearances, for sure. Perhaps another All-NBA nod, or two. Another All-Defensive team selection, or two. Perhaps another Finals run, or two.

Think about how much stronger his NBA 75 candidacy would have looked with another two seasons of team and individual dominance. Thompson should have made it, anyway, for all the reasons already listed. The Warriors don’t win that first title in 2015 without Thompson’s brilliant shooting and defense. They don’t go 73–9 the next season without him. Curry could not have carried the Warriors this far without Thompson taking on the best opposing guards every night.

And for all the gravity Curry creates with his supernatural shooting prowess, Thompson does the same for Curry. Heck, if Curry didn’t exist, Thompson would stand as the greatest volume three-point shooter of all time.

“You’ve never shot below 40% in a single year of your career from three,” I remarked.

“Only one other guy’s ever done that—my point guard,” Thompson replied. “Whatever. Sorry.”

It was a brief and rare moment of self-promotion, a flash of pride and frustration seeping out amid the tedium of a long and torturous rehab. The wait is over now, and the bitterness has given way to joy. Klay Thompson is back, and his game will do the talking from here.