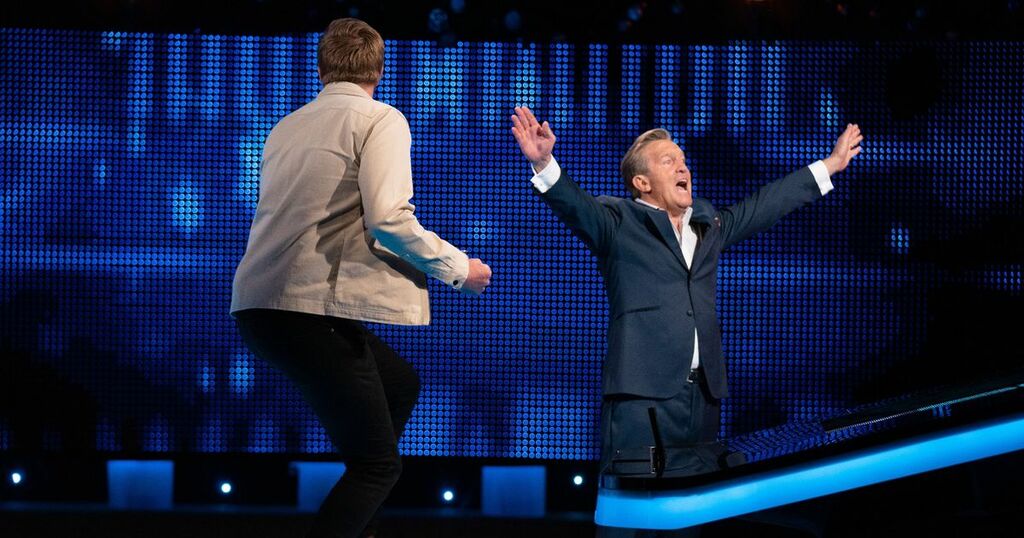 During filming of The Chase, there is a looming presence on set which viewers at home don't get to see.

However, sometimes things do go wrong and the integrity of the series is called into question by angry viewers at home.

Episode of The Chase are edited before they go out to viewers, with the three episodes they film per day taking 90 minutes each.

Bradley doesn't actually get to see the questions before they start filming, leading to laugh out loud moments such as the infamous 'Fanny Chmelar' incident.

However, this does mean he can slip up during vital moments - and that's when the lawyers have to get involved.

While it's easy to correct mistakes during the bulk of the show, it becomes a particular issue during the tense Final Chase.

Brad is required to ask the contestants a set of questions under a two minute time limit, then do exactly the same for The Chaser, so how accurately and quickly he speaks is a major factor.

The Final Chase is almost always filmed in one go, according to Bradley, but it can be stopped and re-started if the presenter stumbles on a question.

The lawyers are always on hand to make sure that this is done in a fair manner - even going back through what they have just filmed.

"If there is a slight misread, I am stopped immediately – bang – by the lawyers," Brad previously told Radio Times.

"We have the compliance lawyers in the studio all the time. What you have to do is go back to the start of the question, literally on video tape where my mouth opens – or where it’s closed from the previous question – and the question is re-asked. It is stopped to the split second."

He added: "It means no time is lost for either the contestant or the chaser."

On average, it takes Bradley 3.6 to 4 seconds to ask a question, which is pretty rapid.

Admitting he is aware of how fast he must go, the presenter said: "You have to be at such a speed: if you’re a contestant and I go ‘what’s… the capital… of France… ‘ they’d be dead and buried in thirty seconds.

"I have to make sure they get up to speed and they’re getting about 18 or 19 questions answered correctly. That’s the real banana skin score [that will trip the chasers up]. Once the chasers get in a rhythm there’s no stopping them. They can answer 24, 25 questions in two minutes. We’ve even almost reached thirty."

Over the years there have been some 'fix' claims over the speed of questions and how easy they are, but the team gets to choose which set they are asked in the Final Chase.

The production company behind The Chase employs an independent professional monitoring company named Beyond Dispute.

They ensure that the questions are fair, balanced and selected randomly, meaning the entire process is beyond question.

There was once a controversial incident where the clock appeared to glitch during a Final Chase back in 2016, leaving viewers fuming.

Mark Labbett appeared to get an extra second when the timer froze on 10 seconds and then went back up to 11.

There was no chance of the tea being caught and a spokesperson for The Chase explained it was an error during the editing process and did not impact the actual gameplay.

The Chasers are once again forming the greatest quiz team in existence.

Usually the biggest brains in Britain compete against a team of contestants on their own, but in the nail-biting spin-off series Beat The Chasers.

Brave contestants take on two, three, four or all five Chasers at once for the first time, with a new series starting tonight on ITV at 9pm.

Mark ‘The Beast’ Labbett, Anne ‘The Governess’ Hegerty, Paul ‘The Sinnerman’ Sinha, Jenny ‘The Vixen’ Ryan and Shaun ‘The Dark Destroyer’ Wallace are all joining forces.

The exciting format means The Chasers have the clear advantage but a defeat is even more humiliating.

Normally they only let themselves down in defeat, but tensions start to flare when they start getting questions wrong while they are all in a team.

Bradley will call hopefuls down from the audience to compete in a hardcore version of The Cash Builder, which will see them eliminated immediately if they get the first question wrong.

They must then choose how many Chasers to face - with the incentive being far greater quantities of cash for facing more quiz geniuses.

Will anyone be able to Beat The Chasers this time round?

*Beat The Chasers airs tonight on ITV at 9pm

Do you have a story to share? Email web features@trinitymirror.com