Tears triggered at filming of stage musical 'Come From Away' 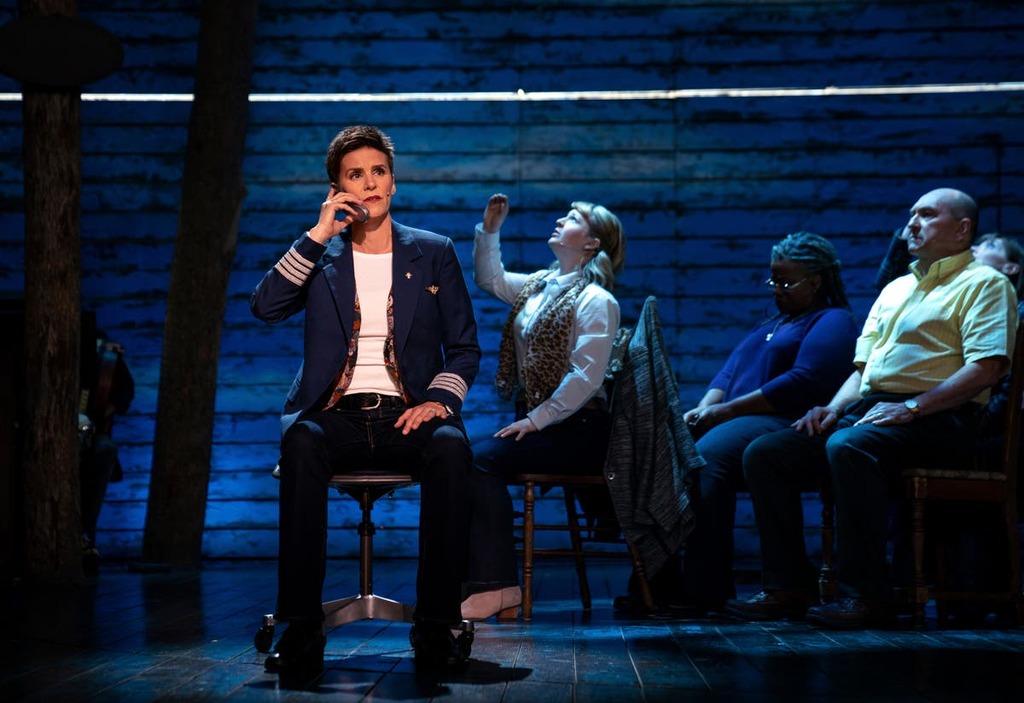 Many months into the global pandemic, a Broadway musical about another horrific event that shook the world brought people together.

The doors of the Gerald Schoenfeld Theatre were cracked open for several weeks in May to film the cast performing “Come From Away,” the story of a Canadian town that sheltered air travelers after the 9/11 attacks.

On the last day of filming, an audience that included 9/11 survivors and frontline workers were invited to watch. The actors were greeted by cheers and applause on the street outside — and they promptly burst into tears. Later, it was the turn of the guests to break down.

“It was their first time back seeing a Broadway show," said Christopher Ashley, the director who won a Tony Award helming the stage show and directs the film. "When the actors walked on stage for the first time, there was this wall of sound — just like screams and whistles and laughter and crying. It was an extraordinary afternoon.”

Television viewers will get a taste of it on Friday when Apple TV+ streams “Come From Away,” which was edited down over several performances with 10 cameras, augmented with close-ups with Steadicams and crane shots.

The musical is set in the small Newfoundland town of Gander, which opened its arms and homes to some 7,000 airline passengers diverted there when the U.S. government shut down its airspace.

In a matter of a few hours, the town was overwhelmed by 38 planeloads of travelers from dozens of countries and religions, yet locals went to work in their kitchens and cleaned up spare rooms to offer space and food to the newcomers.

“What the people in Gander did was they took care of people regardless of their political state, their sexual orientation, their color, their anything. They just were like, ‘People are people and we’re going to take care of them.’ So that’s what I hope is taken away from this event is — just the reminder,” said Sharon Wheatley, a veteran actor in the show.

Wheatley is part of a cast of a dozen who play both residents and marooned passengers, telling true stories of generosity, compassion and acceptance, while fear and suspicion reigned in America.

The cast assembled for the film is mostly the actors who are set to resume the Broadway run on Sept. 21. One exception is the return of original cast member Jenn Colella, who filled in for British actor Rachel Tucker, who was unable to return to New York due to COVID-19 restrictions.

Since it's debut, the musical has taken different issues depending on real events swirling. During the 2015 Paris terror attacks, the focus was again on Islamic extremism. When Ivanka Trump and Canadian premier Justin Trudeau saw it in 2017 on Broadway, the issue was immigration and walls. Now, with New York emerging from the pandemic, a new aspect will come front and center.

“The show remains the same, but people look at it with these different lenses at different points in time,” said Ashley. “People will absolutely be thinking about the pandemic and that sense of uncertainty that we’ve all had to learn to live with about what’s going to come next, which was very alive and heightened during 9/11.”

Irene Sankoff, half of the Canadian husband-and-wife creative team that wrote the book, music and lyrics, noted that COVID-19 cases in Newfoundland are very low right now, another example of the same community coming together.

“That’s the point of the show: You overcome differences and you take care of one another in response to darkness,” she said. “I think that’s what we wanted to write a show about.”

The musical veers its focus from weighty matters — a mother anxious about her missing firefighter son in New York — to more silly events, like a rowdy evening at a local bar where visitors are urged to kiss a cod.

While the terror attacks are ever-present in the musical, the focus is on the response by a town in Canada. The words “World Trade Center” and “terrorist” are each uttered only once. The creators like to call it a “9/12 story.”

Co-writer and co-composer David Hein, who admits he's seen the show too many times to count, said the movie version's close-ups and use of cameras powerfully tell the story in a new medium.

“We talk a lot about when we were theater kids and only being able to afford the seats at the very back. Now, being able to give kids who can’t even come to Broadway or kids who might not be able to get the front row seats that opportunity to see it up close, is a huge opportunity and just wonderful.”

Wheatley has been with it every step of the way, from its birth at La Jolla Playhouse in California in 2015 to its long Broadway run and Tony nominations. She recalls her audition process, which wasn't too promising.

"I remember I didn’t even iron my shirt. I was so tired of going to auditions and not getting them. It was like my way of acting out. And I think, if I had realized back in 2015 how far the show was going to go, I may have ironed my shirt.”