Tarantula prank joker has locals petrified with his web of lies 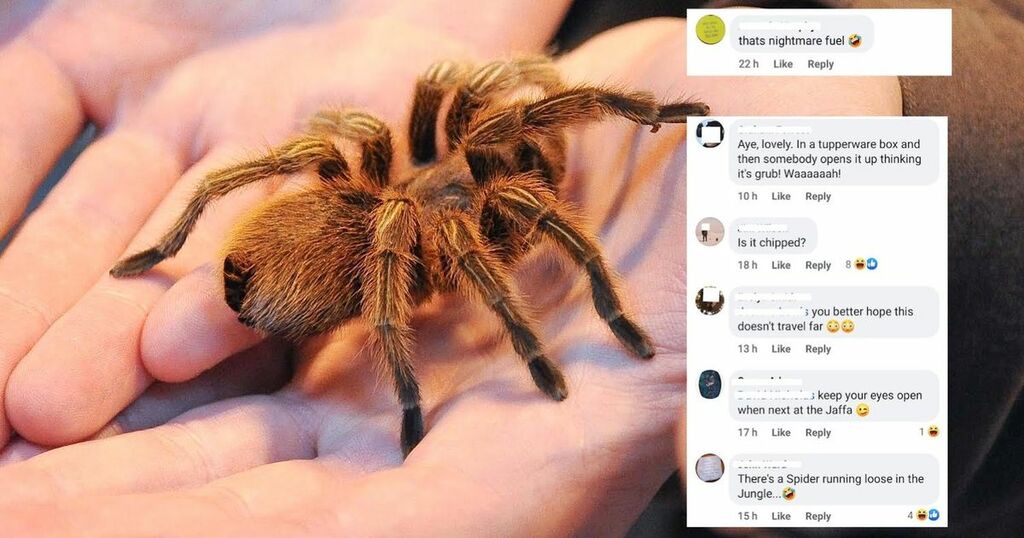 A cheeky prank telling people a venomous tarantula is on the loose has sparked panic in Hamilton.

Locals were terrified to hear that the pet Goliath birdeater had escaped from its owner's home and could be creeping around neighbourhoods in Burnbank.

And the joker even had worried residents checking their homes, sheds and garages for the hoax spider as they fell for his web of lies.

Prankster Barry Martin told Lanarkshire Live those fooled were frantically going round their house making sure all windows and doors were locked.

Barry posed as an elderly woman on a "burner" social media account claiming her grandson's pet tarantula, named Barbie, had escaped from his ground floor flat.

The post had people believing that Barbie had her venom removed in a bid to reassure those on the lookout for the creature, and to contact the SSPCA if she was found.

The post read on Facebook: "Just a wee message on here to check your cars sheds and garages etc, my son Matthew's pet goliath birdeater has escaped from his ground floor 4 in a block house in Kenilworth Crescent, Burnbank.

"The spider has had its venom deactivated and although they do bite its normally a last resort. It will run before it attacks so if you see it please call SSPCA Scotland on 0300 099 9999 and catch it in a tub or box. Thank u xx."

Over 100 comments replied on the local community page, petrified of coming in contact with the escaped beast.

One responded: "That's nightmare fuel", while another panicked: "I'm terrified of normal sized spiders, this guy is the stuff of nightmares.

"I feel sorry for the wee scary monster though, he must be scared. I hope he's found safe and sound."

Many people alarmed at the post began tagging friends in the thread warning them the spider could be nearby. One woman told her pal to "just keep your windows and doors closed".

Another user said: "I pity the one that finds it but I hope it's safe."

One person believing to be very close to where the tarantula escaped from responded: "In my bloody street I will die off if that comes in my house."

"That's no one sleeping tonight", remarked a member of the page.

The decoy account later told everyone that Barbie had been found and was hiding in the bedroom curtains.

But one local had already argued that: "You can not 'de-venom' a tarantula" in a desperate attempt to warn Hamilton residents of the dangers of the creature.

He added: "So anyone who may happen across it should still be careful, their venom isn’t often something that affects humans but if you’re allergic it can.

"They can also kick their hairs at you which is irritating to the skin. I hope he is found safe and sound but the chances of him even being outside of the building are very slim. Hope there’s a happy ending to this story."

Thankfully for those scared, it was all just a prank, as practical joker Barry said: "I couldn't help myself.

"It gave us plenty of amusement reading the panicked comments last night."