By Patrick Wintour, Peter Beaumont and Julian Borger in Washington

The US and UK have scrambled reinforcements to Kabul to help evacuate their diplomats, soldiers and citizens as well as thousands of Afghans who have worked with them, as the Taliban advance towards the capital.

The Pentagon announced it would send three battalions, about 3,000 soldiers, to Kabul’s international airport within 24 to 48 hours of the announcement on Thursday. The defence department spokesman, John Kirby, said the reinforcements would help the “safe and orderly reduction” of US nationals and Afghans who worked with the Americans and consequently had been granted special immigrant visas.

“We have been watching very closely with concern the security situation on the ground – and far better to be prudent about it and be responsible and watching the trends to make the best decisions you can for safety and security of our people than to wait until it’s too late,” Kirby said.

Senior US officials spoke to Afghanistan’s president Ashraf Ghani on Thursday and told him the US “remains invested in the security and stability of Afghanistan” in the face of Taliban violence, the state department said.

Antony Blinken, US secretary of state, and Lloyd Austin, defence secretary, told Ghani Washington was reducing its civilian footprint in Kabul given the “evolving security situation” and would increase the tempo of special immigration visa flights for Afghans who helped the US effort in the country, the statement said.

The UK said it would send 600 troops, and the defence secretary, Ben Wallace, said Britain was relocating its embassy from the outskirts of the secure Green Zone to a potentially safer location closer to the centre of the capital.

As many as 200 UK diplomats and soldiers are being evacuated, but precise numbers are not being given. Britain expects to evacuate up to 4,000 entitled Afghans as well. Other western governments are also accelerating plans for the evacuation of embassy staff amid fears over the Taliban’s relentless advance across the country.

Canadian special forces will deploy to Afghanistan where embassy staff in Kabul will be evacuated before closing, an official told Associated Press on Thursday.

The German embassy in Kabul put out a tweet on Thursday urging all its citizens to leave the country as fast as possible on commercial flights.

The announcements came as Taliban fighters captured Afghanistan’s second and third largest cities on Thursday. The seizure of Kandahar and Herat marked the biggest prizes yet for the Taliban, who have now taken 12 of the country’s 34 provincial capitals.

The group has now established a bridgehead within 95 miles (150km) of Kabul and its rapid advances leave the capital isolated from the rest of the country.

At the same time as deploying three battalions to Kabul, the Pentagon is sending a thousand troops to Qatar to help the processing of interpreters and other former Afghan staff who have been granted special visas. Up to 4,000 additional US troops will be put on standby in Kuwait.

But the sudden, urgent deployments of troops to help evacuate their own people, will underline the message to Afghans that western capitals believe Kabul’s fall to be probable and imminent.

Mitch McConnell, the US Senate minority leader, criticised the Biden administration on Thursday for its “reckless policy” on Afghanistan, which he said was “careening toward a massive, predictable, and preventable disaster”.

As the Taliban offensive gathered pace, diplomats were meeting in Doha for continuing peace talks that appeared less relevant as each new government position fell. Kabul’s High Council for National Reconciliation said it had submitted a new peace plan, without giving any details. AFP quoted an unnamed government negotiator as saying it proposed a power-sharing deal in return for an end to the fighting.

Wallace said he intended the bulk of the UK’s evacuated personnel – the residue of a onetime British military presence of 9,500 UK troops in Helmand province – to be out of the country well before the 11 September deadline that has been set by the Americans for the end of the withdrawal. The target is to complete the evacuation by the end of this month.

The British ambassador to Afghanistan, Laurie Bristow, will remain in the country with a core backup support staff for the moment, mainly to help with relocation.

Wallace said the measures, conveyed to UK opposition party leaders on Thursday, were not a panic response to the faster than expected Taliban advance, but one of many contingency measures the Ministry of Defence (MoD) had prepared once Joe Biden had announced the end of US troop presence.

Wallace said: “We recognise what is going on now on the ground, but this is a pre-planned phased draw-down alongside civilian aircraft. We do have to put troops in order to enable the next step of leaving. It is nothing other than to go in to draw down quite significant numbers.”

But the larger than expected cutback in the UK diplomatic footprint, and the evacuation of the embassy, do reflect the alarm that the official Afghan government forces do not have either the resolve or military command to resist the Taliban advance.

The UK currently has about 150 to 170 personnel on the ground in Afghanistan, and says it has obligations to remove up to 4,000 Afghan personnel who have worked for Britain during its military campaign that started in 2001.

But there is no disguising the sense of frustration inside the MoD at Biden’s decision, and the overwhelming sense that the latest retreat will only add to the impression that the Afghan mission is ending with the Taliban in the ascendancy.

The new UK evacuation force will be led by the Joint Force Headquarters headed by Brig Dan Blanchard drawn from 16 Air Assault Brigade. The personnel will include medics, logisticians and air movement personnel, as well as protection forces. The force will start to deploy by the end of the week.

The evacuated personnel, Wallace said, would go on to civilian aircraft, reflecting the military air superiority Nato forces still have in Afghanistan. If the Taliban advance speeds up the UK could use military planes.

Wallace said most of the remaining UK diplomatic work in Afghanistan was to do with identifying the Afghans whom the UK had a responsibility to evacuate. They included translators and security guards.

In the face of the Taliban advance the British government is urging the group to acknowledge that if they want international recognition they will need to win the support of the Afghan population, something a purely military assault will not achieve.

Defence ministry sources say that where they see new groups coming into danger from the Taliban they have tried to mitigate risk, and give leeway to come to the UK. The MoD has stressed that the relocation scheme will remain open after the UK has left, and new laws will be passed to allow relocations to come from third countries. 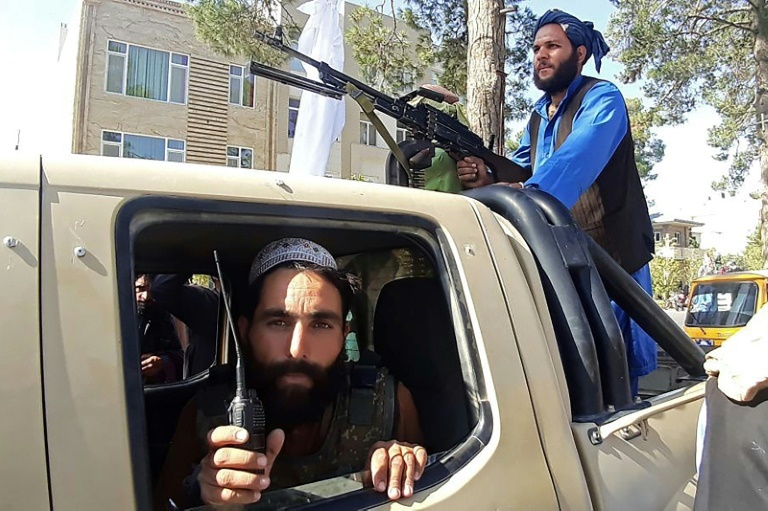 US, UK sending troops to evacuate nationals as Taliban advance across Afghanistan
Kabul (AFP) - The United States and Britain ordered the deployment Friday of thousands of troops to Afghanistan to evacuate…

AFP
One subscription that gives you access to news from hundreds of sites
US to send 3,000 additional troops to Afghanistan to aid embassy evacuations

The Guardian - UK
US sending 3,000 troops to Afghanistan to help with the evacuation as Taliban advances on Kabul

Comes as the situation devolves in the region.