'Tales of Arise' is the most swoonworthy RPG of 2021 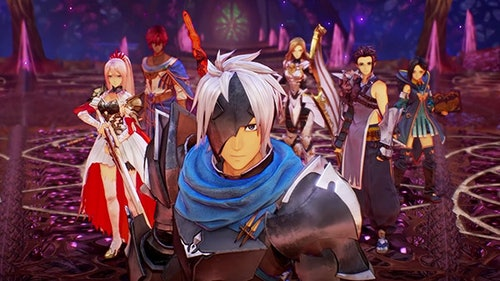 Even so, Tales of Arise marks a new high point for Bandai Namco’s long-running anime RPG franchise. The game’s breathtaking new visual style and updated real-time battle system feel decidedly next-gen, while remaining true to the series’ legacy of rich worldbuilding and charming characters. It’s a welcome step in the right direction for a series that plateaued during the PS3 and PS4 generations, with entries like Tales of Xillia, Zestiria, and Berseria all having a similar feel.

Tales of Arise follows Alphen and Shionne, inhabitants of rival planets Dahna and Rena. The Dahnans have been oppressed by Renan rule for 300 years. A former slave himself, Alphen wants to liberate his people. Meanwhile, Shionne wants to take down the Lords who rule each of Dahna’s five realms. Their goals align, and so they journey together to accomplish them.

The story and lore are fascinating, building to a satisfying payoff in the game’s second half. The best twists in Tales of Arise will have you wondering how it all connects together. While discussions about weighty topics like slavery and liberty can get a bit cheesy at times, Arise tackles its core themes of prejudice and racism admirably — for the most part. The darker nuances — such as the consequences of erasing an indigenous culture — are explored in optional conversations between the cast members, allowing players to explore the story more deeply or keep things breezy.

These enjoyable bits of banter provide more insight into each character’s personality and the interpersonal dynamics within the group. Even the comical skits that have no bearing on the story, such as one particular party member discussing proper food etiquette with the others, are fun to listen to.

Arise’s main cast is among the strongest of the series. Rinwell, a young spellcaster, carries a small owl called Hootle in her hoodie. Law is a feisty martial artist who thinks with his fists. Dohalim is an articulate noble who fights with a rod and Kisara is his guardian, equipped with a mace and large shield to protect those who she cares for.

Everyone feels grounded and joins the party in an organic way, and the game’s central romance is particularly enjoyable to watch unfold over the game’s 35-40 hours. The series has dabbled in romantic subplots in the past, but this is the best since 2005’s Tales of the Abyss between Luke and Tear.

Each new Tales game has implemented subtle tweaks to the series’ real-time battle system, far ahead of its time compared to other stalwarts of the genre. Recent entries moved away from each character having individual MP bars that drain every time you use special attacks called Artes. These Artes now have a designated AG cost, and you have an AG bar that automatically replenishes whenever you’re not attacking.

The AG System is far more flexible than a traditional MP bar. In previous games, running out of MP meant you’d have to resort to normal attacks or use a restorative item. Since AG recovers on its own — similar to ATB charges in Final Fantasy VII Remake — you can string together flashy Artes throughout every battle in Arise without worrying about resource conservation. That means progression feels meaningful over time, as you’re able to perform more impressive combos and Artes.

Arise offers additional unique combat mechanics in Boost Attacks and Boost Strikes. Boost Attacks summon your allies to perform a special move that has many benefits. In addition to Boost Attacks restoring your own AG, for example, Shionne’s Boost Attack clips flying enemies’ wings, while Rinwell’s interrupts any enemies that are casting spells and prevents them from doing so again for a set period of time.

Going on the offensive is an effective way to restore AG, and so Arise’s battle system incentivizes an aggressive and dynamic playstyle. As you score higher combos, you can activate Boost Strikes, which are tag-team one-hit-KO attacks between two party members. These are very similar to Tales of Xillia’s Linked Artes mechanic.

Boost Strikes deliver cinematic moments of action quick enough that they don’t ruin the flow of the brisk combat. For example, Burning Strike sees Law kicking Shionne’s bullets down to the ground in a fiery explosion, while Obelisk Blade has Dohalim using his nature-based magic to create a large crystal spike on Kisara’s already massive shield to cut through enemies.

If Boost Strikes have a flaw, it’s that there isn’t enough variety — there are only about 20 in total. Each of the six party members has a unique Boost Strike with each other. By the game’s halfway mark, I had already seen all of them multiple times.

The world in Tales of Arise is stunning, with a staggering variety of environments: volcanoes, grasslands, and frozen areas abound. Additionally, the 3D character models look taller and have more realistic proportions than in previous games. A hint of cel-shading on the character models really makes them come alive.

The main menu is a gorgeous stock image of the party members together, and it can sometimes change depending on who’s in the party or where you’re at in the story. If a party member is missing due to story reasons, the main menu will reflect that. An important wardrobe change just occurred? You’ll see that too. It’s a nice touch that makes your party members feel more like people that evolve over time rather than set templates that never change.

One notable drawback in Arise at large, however, is the minimalist user interface during battle. In previous games, your characters’ faces would be next to their respective HP bars, and the faces would change to show aggression during attacks or pain when they take damage. In Arise, the minimalist UI only shows the characters’ HP bars with their name on it. As a result, the UI loses a bit of that 2D anime charm.

Additionally, the 2D anime character portrait cut-ins that appear during each character’s Mystic Arte, which is their “ultimate attack,” have been replaced with 3D alternatives. While the 3D character models are dynamic during the cut-ins, the 2D portrait is a Tales tradition I would’ve liked to see continue.

Tales of Arise is a triumph in almost every way, delivering a strong narrative, well-developed characters, and combat that feels snappier than ever. This is the next step in the evolution of the Tales series, and the future looks awfully bright.

INVERSE VIDEO GAME REVIEW ETHOS: When it comes to video games, Inverse values a few qualities that other sites may not. For instance, we care about hours over money. Many new AAA games have similar costs, which is why we value the experience of playing more than price comparisons. We don’t value grinding and fetch quests as much as games that make the most out of every level. We also care about the in-game narrative more than most. If the world of a video game is rich enough to foster sociological theories about its government and character backstories, it’s a game we won’t be able to stop thinking about, no matter its price or popularity. We won’t punch down. We won’t evaluate an indie game in the same way we will evaluate a AAA game that’s produced by a team of thousands. We review games based on what’s available in our consoles at the time. And finally, we have very little tolerance for junk science. (Magic is always OK.)