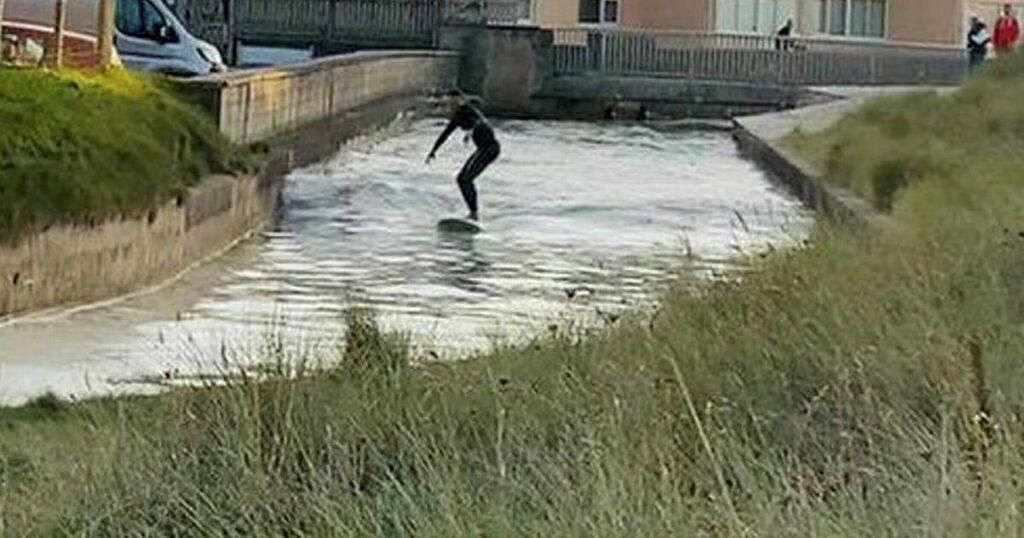 A surf instructor has laid claim to Britain's 'coolest commute' after he was pictured riding the waves home from work on a river tidal bore.

Reuben Mellor-Clark, 21, had finished teaching surf lessons at Perranporth in Cornwall when he spotted a wave on a river channel that leads to the beach on Thursday (07/10).

The surfable Perranporth Bore is created when waves are squeezed into the river from the ocean, creating the opportunity for a very unique mode of transport.

And Reuben said he couldn't pass up the opportunity to catch it part-way home.

He said: "It was the first time I'd ever done it.

"I prefer surfing in the sea but I liked the bore because it's a bit of a novelty.

"It only comes around every so often we normally only see it maybe once a year maximum.

"It probably goes for about ten metres, but it's depending on conditions.

"You can surf it the whole way down the river which would be like a minute but that evening it wasn't quite big enough."

The surfer reckons that he managed to stay on the wave for about ten seconds.

"It's a bit weird, it doesn't feel the same, it just pushes off in one big surge so feels more like a manufactured wave," he added.

Kate, who manages Perranporth Surf School, said: "I just love it when it happens, it was hilarious, people were watching like 'what the hell is he doing?'

"We were just messing around."

It was the combination of a high spring tide and a big swell rolling in from storms in the Atlantic that created this particular wave.

Ruben paddled onto the wave when he was driving back home from a coaching session, and the moment was caught by his aunt Kate Walsh.

Big waves around the Cornish coastline have been created from the remnants of former Hurricane Sam, according to surf website Magic Seaweed.