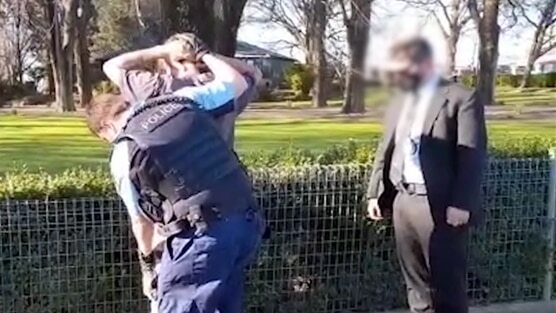 A man has been charged with a firearms offence after a counterterrorism raid in the New South Wales central west.

Warning: This story contains an image of Nazi iconography.

The 26-year-old was charged with possessing a digital blueprint that could be used to build a firearm after a raid by the NSW Joint Counter Terrorism Team (JCTT) on Friday.

The man is accused of having the blueprint on his mobile phone and of importing legally obtained items over the past 14 months to be used to build firearms.

The investigation to find him began two weeks ago after Border Force officials intercepted a package with a firearm component addressed to a location in Orange.

The JCTT said the man had been identified as a supporter of "ideologically motivated violent extremism".

A Nazi flag can be seen hanging on the wall of a bedroom in vision released by the JCTT.

Video released by the group showed the man being arrested on one of the busiest suburban streets in Orange, on the footpath of a park popular with families and tourists.

The man faced the Orange Local Court today and was refused bail.

He will return to court later this month.

A second man, 31, was served with a Firearms Prohibition Order on Friday as part of the investigation.