A sprawling block of residential land in one of Queensland's most desirable hinterland locations is set to be sold off to a property developer for a modest sum — and not put out to public auction — as part of a land-swap deal.

The 8,223-square metre site at Maleny is a two-minute drive from the centre of the bustling township.

The surrounding area is of such beauty that it is among the country's top destinations for wedding ceremonies and photographs.

The plan to offload the picturesque site to developer Maleny Estates for $850,000 will come to the Sunshine Coast Council meeting today, where officers are recommending it be endorsed.

An offer was made to the developer in March this year.

Around the corner from the land in question, an 800-square metre residential block in Maleny is on the market for $565,000.

Councillor Winston Johnston said the land being sold had been valued by multiple experts, and the price reflected the fact that there was no road access to the site.

The council report suggests the developer approached the council to purchase the land "many years ago", and discussions have continued since then.

In exchange for the parcel, the developer would hand over a narrow block — about 1300 square metres — for $130,000, which would allow the council to lay water and sewerage infrastructure, and connect nearby roadways.

Once secured, that sliver of land would better link the council's 126-hectare Maleny Community Precinct to the surrounding area.

Under Queensland law, councils are meant to sell off "valuable" assets either by tender or by auction.

However, council officers report that this case was an allowed exception because it was in the public interest for the land to go to the developer.

Their report says the council does not need the land, and resuming the smaller lot would be more expensive than the land swap.

"Given the remote location of proposed Lot 1 and restricted access, it is not considered appropriate to dispose of the parcel by the way of tender or auction," the report says. 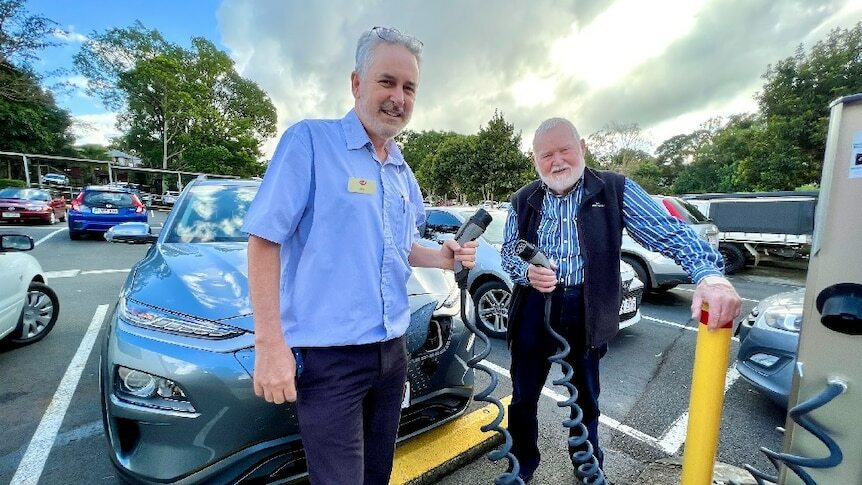 Maleny's electric car charging stations draw in Queensland tourists, as EV popularity explodes
When it comes to capitalising on environmentally conscious daytrippers, one Queensland town is pulling out all stops.

The land has been vacant for several years after an attempt to sell it in 2019 fell over.

Moving people out of flood-prone areas in north and south Lismore could cost $400 million, and the local council can't…