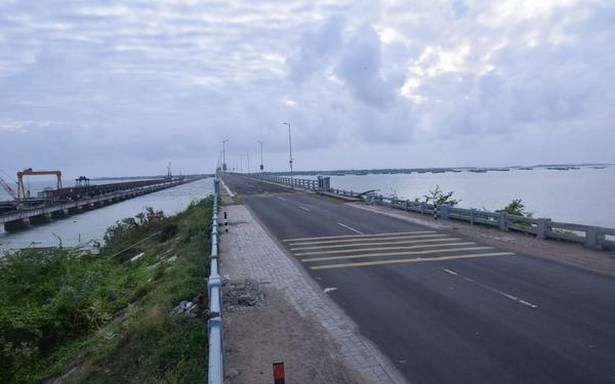 The Sunday lockdown announced by the government was total in southern Tamil Nadu.

District Collectors and Superintendents of Police across the districts said that except for movement of essential goods which were exempt from the lockdown, all other activities were suspended.

In a bid to contain the COVID-19 spread, the government had taken a number of measures. Already, the shrines were ordered to be shut from Friday to Sunday.

The Covid Care Centres had again been spruced up in many of the districts and in Corporation limits. So far, no cluster formation was seen in the Madurai city, said Corporation Commissioner K.P. Karthikeyan in a press release. The health department officials had identified volunteers in all the 100 wards who would primarily coordinate with the COVID-19 patients in isolation at their respective dwellings.

The Madurai Collector S. Aneesh Shekhar said a special control room had been opened for people to stay in touch over phone. Counselling would also be offered to the needy. He appealed to the people to cooperate with the officials in fighting the big challenge. There was no need for panic, he added.

Government Rajaji Hospital Dean Rethnavel said they had sufficient bed strength and oxygen facility at the isolation wards. Thanks to the government initiative and generous contributions from service organisations and private sector with which new oxygen generation plants had been installed.

Dindigul Collector S. Visakan said only essential commodities were moving across the district. The shops were shut in Kodaikanal and Palani.

Though elaborate arrangements had been made for the Thai Poosam, beginning on Jan. 12 with the hoisting of the holy flag, with rising COVID-19 cases and Omicron, the HR&CE officials said that they might take a relook in a day or two. Padayatris from various destinations were going towards Palani. The police said that they were monitoring the movements. Many voluntary organisations were giving face masks to the devotees.

In Virudhunagar district, the officials heaved a sigh of relief as Prime Minister Narendra Modi’s scheduled visit on Jan. 12 had been cancelled.

In many other districts including Sivaganga and other parts, the officials said movements were nil on account of the lockdown.

In Ramanathapuram district, the fishermen were instructed to stay off the sea on Saturday as they had to return on Sunday. Fisheries Department officials said they had not issued tokens and all the mechanised boats were anchored.

The Pamban bridge and a few beaches in Rameswaram wore a deserted look as visitors and tourists were not permitted, the police said.

In Tenkasi and Kanniyakumari, the inter-State movement came under strict vigil. Similarly, police and health staff were vigilant round the clock in Kumuli, Bodimettu and Cumbum Mettu, where vehicles from Kerala entered. Only after thorough checks and screening of the crew, the vehicles were allowed to enter.

Railway stations in southern districts witnessed activity only when trains arrived in the early mornings in Dindigul, Madurai, Virudhunagar districts., railway officials said and added that only pharmacies were open in and around railway stations.