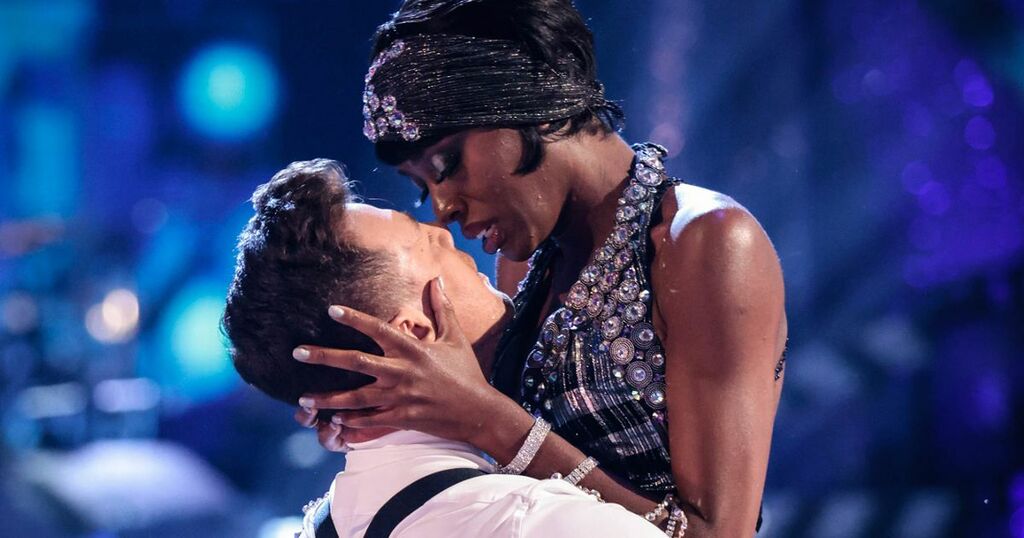 Strictly's pro dancer Kai Widdrington has been caught telling his on-screen dance partner AJ Odudu that he "loves" her.

The dancer, 25, and the 33-year-old TV presenter's performances have led to rumours that the pair are getting close off-screen too and the latest audio will certainly add fuel to the fire with that rumour.

They performed a gripping routine that was full of chemistry and was inspired by The Bodyguard on Saturday night. AJ had to fight back the tears after the performance as she revealed she was struggling with self doubt.

She was soon left relieved but emotional again, as the judges gave her great scores for her latest routine.

And in the secret audio clip from after their performance, Kai can be heard telling AJ that he "loves her so much".

Each week, Strictly releases "secret mic" audio that gives viewers a quick snippet of what the contestants say to each other on the dance floor.

This week on BBC's Strictly Instagram, Kai can be heard in the clip singing his partner's praises before saying: "Aww, I love you! I love you so much!"

A source previously told The Sun that the Married at First Sight: After Show presenter is falling for her dance partner more week on week.

They said that cast and crew are even placing bets on the pari hooking up and becoming the first romance of the series.

The source said: "Everyone backstage is talking about the sparks flying between AJ and Kai. It’s very passionate and intense whenever they’re together.

"They’re both single and have really hit it off and everyone on the show is saying it’s only a matter of time.

"They’re always laughing and flirting — romance is 100 per cent on the cards.

"Kai is totally AJ’s type. He’s got loads of banter and he’s been blown away by her, too."

The source continued to say that usually AJ puts her work first, but the two have now collided on the show as she trains for up to 10 hours a day with Kai.

She has recently labelled herself "unlucky in love" explained how she unsuccessfully tried dating apps in her quest for romance.

She said: "I just don’t meet anyone, aside from TV programmes I’ve done. I’m still hoping that I’ll meet my man through a friend. I am a personality girl.

"I like charismatic guys who can take the mickey out of themselves but, when it comes to work, they are focused and they know what they want in themselves and in a partner."

Strictly Come Dancing airs Saturday nights on BBC One, with the results show on Sundays.