The Gorn are back! In Star Trek: Strange New Worlds Episode 4, “Memento Mori,” Starfleet begins believing the myth of the Gorn is real, and the species of lizard aliens who fought Captain Kirk in The Original Series suddenly just got a lot more fleshed-out in Star Trek canon. Yet, Strange New Worlds also created several new mysteries and continuity twists about the Gorn.

Inverse caught up with Episode 4 co-writer Davy Perez to get all the scaly details about the Gorn and why he and (Episode 4’s other co-writer) Beau DeMayo made a very specific decision on whether to show the lizard aliens onscreen. Spoilers ahead.

The mystery of the Gorn

Other than the famous appearance of a Gorn captain in The Original Series episode “Arena,” the only other times we see Gorns in Trek canon are in:

Because the Enterprise Gorn is from the Mirror Universe, and the other non-TOS appearances are either animated or skeletal, actual flesh-and-blood Gorn sightings in the Prime Universe of Trek canon are extremely rare.

“We discussed this quite a bit, how to honor the idea that people either haven't seen [the Gorn] and in some cases might not even believe they exist,” writer Davy Perez tells Inverse. “There is a lot we still don’t know about the Gorn. What was fun for me was using parts from ‘Arena’ we do know to inform some of their behavior.”

Perez points out that in “Arena,” Kirk is told by the Metrons that the creature he fights is a Gorn, which gave the writers “room to play” while making sure the moment for Kirk still made sense.

“Our goal is never to undo people’s experience with The Original Series,” Perez explains. “But if we can manage it, perhaps to give us an interesting perspective to consider that lines up with the original stories.”

Because Kirk had never seen a Gorn before “Arena,” some fans might be worried that Strange New Worlds flies very close to violating canon in “Memento Mori.” How can the Enterprise encounter the Gorn in roughly 2259 if Kirk doesn’t see the Gorn for the first time until 2267?

The answer is simple: At no point in this episode do we ever see a Gorn. And Perez reveals this decision was crucial.

“I think there were some early ideas floating around where we might have caught a glimpse of one,” Perez says. “But there was always the idea that we should hear about them and begin to dread the Gorn without ever actually seeing them. Once we decided not to see them at all, the episode sprang to life.”

Because “Memento Mori” doesn’t feature Pike wrestling with a guy in a lizard suit, it doesn’t reference “Arena” all that much. Instead, the structure of “Memento Mori” refers to a different Original Series episode, “Balance of Terror,” in which the Enterprise plays cat-and-mouse with a Romulan ship.

“It was 100 percent an inspiration,” Perez says. “I did a deep dive on submarine movies when I was researching this episode. I wanted to emulate that same feeling as ‘Balance of Terror.’ We put the focus on our crew working together and dealing with their respective problems all over the ship.”

Although Pike, Spock, and most of Starfleet have never seen a Gorn, Lt. La’an Noonien-Singh (Christina Chong) very much has. As revealed in this episode, La’an’s family was murdered by the Gorn when she was a small child on a Federation colony ship, the S.S. Puget Sound. As La’an says in the episode, “plenty of people have seen the Gorn,” they just don’t live to tell the tale.

In this way, La’an has hidden canon knowledge about the Gorn that even Spock and Kirk won’t have until after the events of “Arena” in The Original Series. Notably, this is also the second bit of classic Trek canon that La’an has access to because of her unique background. In “Ghosts of Illyria,” we learn she’s the descendent of the villainous Khan Noonien Singh from TOS and The Wrath of Khan. So, in the ‘60s show, the crew doesn’t know much about the Gorn and has spotty knowledge of Khan, but in Strange New Worlds, La’an has secret knowledge of both.

“I haven’t thought her that way, but I can see how she is sort of the ‘Easter Egg basket’ for our show,” Perez says with a laugh. “She’s an outsider and new character, and she also gets to be an audience surrogate. A lot of La’an’s back story is going to be new information to existing fans as well. That’s what is fun about playing in this era [of Star Trek canon]. There are a lot of stories and ideas that have been touched on in the past but still have lots of potential to explore.”

Perez also notes that La’an’s feelings about the Gorn are intended to reference Kirk’s actions in “Arena,” albeit in a roundabout way. In “Memento Mori,” La’an says, “The Federation teaches that if we can find a way to empathize with an enemy, they can one day become our friends. They’re wrong. Some things in this universe are just plain evil.”

And yet, in “Arena,” Kirk famously refuses to murder a Gorn, proving to the Metrons that human beings are capable of incredible empathy. It’s a classic Trek moment that gets an interesting twist in Strange New Worlds.

“It’s a nice bookend thematically with ‘Arena,’” Perez explains. “La’an says this because of her history with the Gorn. We’re a long way from that lesson right now.” 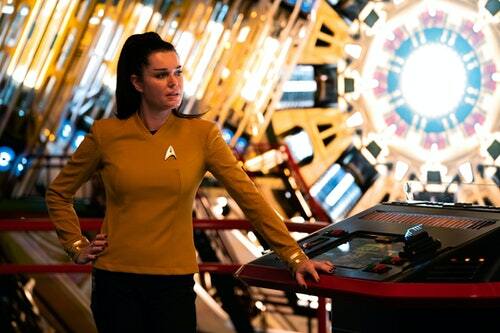 Is Number One an alien? 'Strange New Worlds' writer explains Illyrian canon
Rebecca Romijn's 'Star Trek' character Number One is now an Illyrian. But what are Illyrians? One writer from 'Strange New…

Inverse
One subscription that gives you access to news from hundreds of sites
'Mandalorian' Season 3 trailer breakdown: Bo-Katan, Salacious B. Crumb, and more

Lucasfilm revealed exciting new information about what to expect from Mandalorian Season 3, including a release window, plot details, and…

The prequels are back! 'Obi-Wan Kenobi' is about to begin. Here's the unexpected Star Wars movie you need to watch…