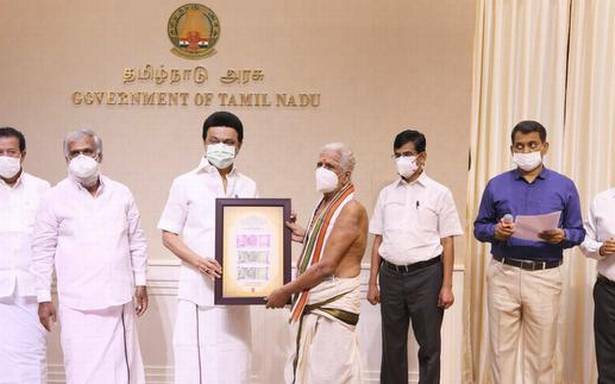 Chief Minister M.K. Stalin on Thursday launched the distribution of enhanced pension to eligible retired priests, who had served in temples including the ones that do not under the control of Hindu Religious and Charitable Endowments Department. It would benefit a total of 1,904 retired priests across the State.

Mr. Stalin handed over the benefits to a few priests in the Secretariat. Minister for Higher Education K. Ponmudi, Minister for Hindu Religious and Charitable Endowments P.K. Sekar Babu, Chief Secretary V. Irai Anbu and senior officials were present during the event.

Last year, the State government announced that the monthly pension to retired priests, who had attained 60 years of age and served for more than 20 years in village temples that were not directly falling under the control of the HR&CE Department, would be increased from ₹3,000 to ₹4,000. It would benefit 1,804 village priests.

It had also announced that the monthly pension for archakars, odhuvars, vedaparayanars, arayars, Divya Prabandham reciters and musicians, would be increased from ₹1,000 to ₹3,000. This would benefit 100 pensioners.