Son's search for answers after mother's death in aged care 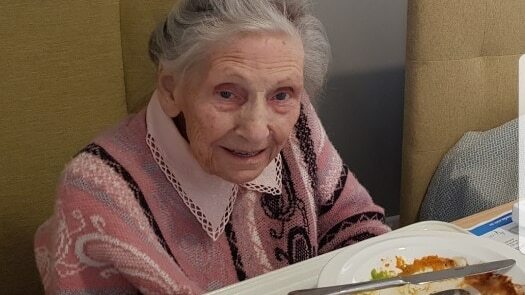 But when he unpacked her belongings returned from the nursing home, he found a chilling series of notes she had made detailing concerns about her care.

"Find out what pills they have been giving me," one note read.

"Terrible pain all over. Asked for medication, told there's nothing wrong with you," another read.

He is seeking transcripts of those calls, and wants to know what happened to his mother in her final months and if her care was adequate.

'She knew what was going on'

When Doris Bradley-Meerwald entered CraigCare in the Perth suburb of Ascot, she had serious health issues, including a history of cervical and bowel cancer, used a stoma bag and had difficulty with mobility.

But her son said the 93-year-old did not have dementia and was fully aware of what was going on, and within months she started to complain about her treatment at the home.

"In December 2020, she started mentioning that she had missed medications," he told Nadia Mitsopoulos on ABC Radio Perth.

"Her eye drops for her glaucoma hadn't been put in properly, they'd missed the eye.

"Medications that were supposed to be given at night then ended up being [given] at midnight or in the next morning.

"I followed up with the nurse and they reassured me that it was given. So, you know, I didn't know who to believe really.

Mr Bradley-Meerwald also discovered hospital notes showing her mother had called an ambulance in May due to pain, but that it was cancelled by CraigCare staff before another ambulance was called the next day to take her to hospital.

He said he was not told at the time.

"[They were] just making these decisions, they weren't phoning me about it, so it was just decisions they were making, putting my mother at risk," he said.

He said she also spoke to friends about her treatment but did not tell him everything; he suspects it was because she did not want to worry him.

"I think because I've got a business," he said.

"And I think the other thing was because I put her into this facility, I think she didn't want to make me feel guilty about it all.

"But, you know, I wish something had happened prior to her passing."

In an audit conducted in January, the Aged Care Quality and Safety Commission found some areas of non-compliance at CraigCare Ascot Waters.

A further audit in March found the home could not demonstrate safe and effective clinical care, citing concerns about falls, fractures and malnutrition in residents.

In May, sanctions were placed on CraigCare Ascot Waters requiring it to improve in several areas and making it ineligible to receive Commonwealth subsidies for any new care recipients for six months.

In a statement to the ABC, CraigCare expressed deep condolences to Mrs Bradley-Meerwald's family.

"Although we cannot publicly discuss the health and care of individual residents, we have been in touch with Mrs Bradley-Meerwald's son with an offer to speak with him about his concerns," it said.

"Residents at CraigCare Ascot Waters continue to receive the highest standard of care while our work with the Aged Care Quality and Safety Commission on our improvement program is underway.

"We are confident of returning the home to full compliance within the commission's timeframes."

'It's just not good enough'

While it is too late to help his mother, Mr Bradley-Meerwald said he wanted answers about the treatment she received at CraigCare and to ensure it did not happen to other families.

"I think, ideally, what I want is change," he said.

"I feel deeply troubled by what happened to Mum.

"I just want to see change in the industry because I think we're all going to get there eventually.