Solar100’s: Jully Merino Carela, The Susan B. Anthony Of Energy 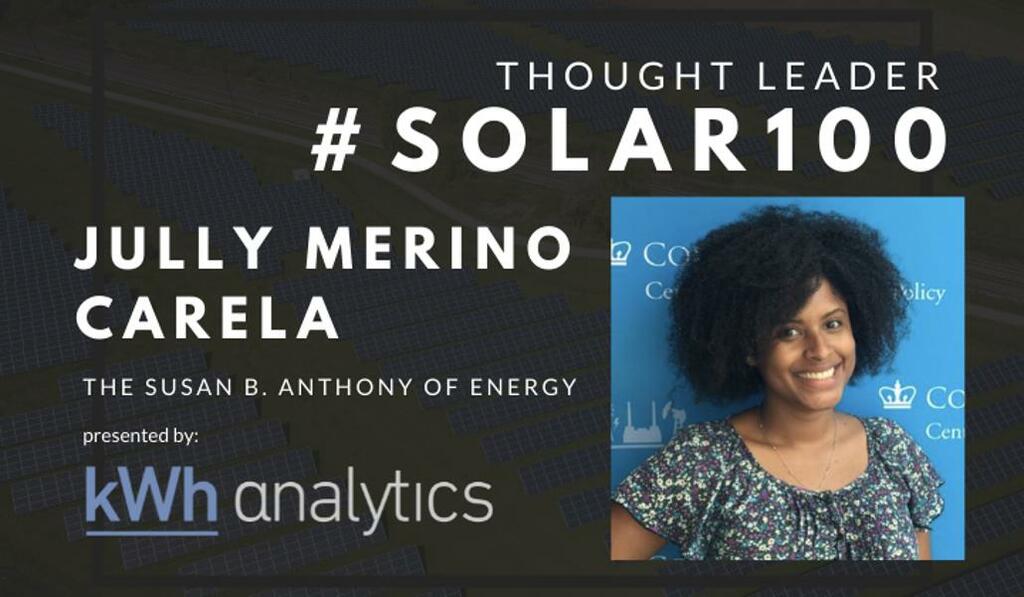 In this edition of #Solar100, CEO and founder of kWh Analytics Richard Matsui speaks with the former Director of Women in Energy at Columbia’s Center for Energy Policy, Jully Merino Carela.

Jully is known for her work in promoting gender diversity and equity in the energy industry. She has spent over a decade supporting women in the workforce, first at Nontraditional Employment for Women (NEW) and then at Columbia’s Center for Energy Policy. Like Susan B. Anthony, she has been a tireless advocate for women and ensuring diversity, equity, and inclusion within our industry.

In this Solar100, Jully weighs in on her career supporting women and people of color, her role developing programs to diversify the energy industry, and her advice to both companies and individuals for helping promote diversity.

RICHARD MATSUI: I noticed that you previously studied women’s studies and worked at an NGO for nontraditional employment opportunities for women, then received an MPA from Columbia. Can you walk me through your career arc and how you ended up working for Women in Energy at Columbia’s Global Center on Energy Policy?

JULLY MERINO: The biggest trend in my career has really been my drive to help women. It started when I was an undergraduate at Penn State. I remember looking at the degree catalog and coming across Women’s Studies; I had no idea this was a degree. I have a lot of strong women in my life, so I knew right away that I wanted to pursue the degree academically.

After graduating, I ended up becoming a union organizer for construction workers in the Phoenix, Arizona area. This was around 2007-2008. It was the era of Joe Arpaio, the infamous sheriff, that targeted immigrants, particularly those of Mexican descent. The workers I organized were mainly of Mexican background and they were really exploited. I grew up in an immigrant community in New Jersey, so that experience really solidified my sense that people were and are being treated unfairly. Being able to support that community was great, but I wanted to get back to the East Coast and get into a role to support women.

When I moved back, I found an amazing company that places women in “nontraditional” union roles, like in construction or as line workers at ConEd and PSEG. The organization strategically targeted these unionized roles for women, because everyone in those roles are paid a certain wage regardless of gender — they are fantastic job opportunities with few women in them.

I loved working for that organization, but non-profit burnout is real, so I started looking for new opportunities. During this time, I found a job at Columbia as a Project Coordinator in their Government and Community Affairs department. Then, I started pursuing a Master’s in Public Administration (MPA) in Environmental Policy and Sustainability Management at Columbia. I chose that discipline, because I knew sustainability would be important moving forward, given everything that was happening in the world around climate. During my program, I came across the Center for Global Energy Policy and the role for the Women in Energy program. Based on all my experience, it was really a perfect fit.

MATSUI: I noticed that you recently completed a second master’s degree from Columbia in Analytics. How do you think you’ll use that in your career?

MERINO: I actually decided to get a second master’s in Applied Analytics, because I wanted to challenge myself and get a technical degree; but, I also think it’s really relevant for a career in Environmental, Social, Governance (ESG) work. The degree encompasses data, technology, and how companies can use that information to make decisions. It’s all about how we frame the data and use it to be able to persuade people. This is something that we need to be able to use for each aspect of ESG — from tracking environmental impact, diversity numbers, and how governance impacts businesses’ bottom line.

WOMEN IN ENERGY AT COLUMBIA’S CENTER ON GLOBAL ENERGY POLICY

MATSUI: Can you provide an overview of Women in Energy and your role for those that aren’t familiar with it?

MERINO: I joined the Center on Global Energy Policy (CGEP) in 2016 and at the time, CGEP was much smaller. Back then, my role at Women in Energy was to organize events and to get it off the ground. We were really focused on students at Columbia but have since expanded.

Today, Women in Energy provides programming for both students and professionals. We offer a few types of different programs to support women in energy. First, we offer a number of larger-scale programs and events on a wide range of topics on everything from energy insecurity and health to energy financial markets. In addition to providing relevant content, we always try to have diverse speakers at these panels because representation matters. When you see someone on a panel that looks like you, it makes a huge difference in how you perceive what’s possible.

We also host a number of other events to get members thinking about Energy, what roles are available, and where they can fit in the industry. For example, we host intimate roundtable discussions on different career paths, work-life balance issues, and everything in between. We also do site visits and hold professional development workshops.

MATSUI: How do you define success for the program?

MERINO: Now that it’s been five years since the program started, we are having women come back and get involved with the program or share new job openings. They want to lift up other women. They saw how powerful the program was for them and wanted to share that with others. From that perspective, I consider the program a success in supporting women.

I also measure success based on our external engagement. You can provide a woman with all the skills and tools to succeed, but if she goes to an organization that is not welcoming, then she will leave that company or the energy sector altogether. We try to tackle this issue head-on by working directly with executives at energy companies to have critical conversations about diversity.

So, I define success from that perspective by having organizations take the content and commentaries we put out and incorporate it into their companies. We, as an industry, are not going to make change by wanting it. We have to work at it together.

MATSUI: How can companies get involved and support the Women in Energy program?

MERINO: The easiest way to get involved is to send us your open job postings to include on our job board. We also have an externship program and are always looking for companies to take on an extern to help them gain relevant experience in the industry. For more information on how you can get involved, please check out our website.

MATSUI: One of the striking stats that you posited in a previous interview was that the entry-level pipeline for roles in energy is 50% women and 50% men. That’s shocking to me, because I don’t see very many women, especially in our space. We work on the finance and data side of the industry, which are both traditionally very male dominated spaces. Can you tell me what’s going on here?

MERINO: It goes back to a few issues. First, there’s the issue I mentioned previously — if the company isn’t welcoming, women will leave. Microaggressions happen all the time; people often don’t even realize what they’re saying is offensive.

Second, women still bear the brunt of childcare, as shown in recent research; so, if a company doesn’t have a flexible schedule, the role won’t work. For example, I recently spoke to a senior woman who works in energy. She told me her company had a standing meeting at 7am every day, but she also has small kids that she needs to help get ready in the morning, so the meetings were really challenging for her to make. Her company luckily accommodated her needs, so she can make the role work. It just goes to show that it’s really important for companies to have that flexibility.

Third, the old boy’s club, as cliche as it sounds, is real and self-reinforcing. When people think of new opportunities, people think of their own networks, meaning men will typically think of other men, especially given the industry is already male dominated.

Finally, the other issue is the lack of representation at the C-suite and board levels. If you don’t see yourself in Leadership, then it might consciously or subconsciously tell you that you won’t be able to make it there.

It’s also not just the energy sector. It’s finance; it’s tech. I like to tell this story about a news segment I watched. The segment said that more men were joining the nursing field and, as that happened, the gender wage gap started growing in this field that was traditionally women-dominated. Based on that, it’s clear that promoting and respecting women is a societal problem.

MATSUI: How else do you think the industry as a whole can support women and diversity in energy?

MERINO: Money talks. Investors can say, “get your act together or we’re not going to fund you.” We started seeing this in recent proxy sessions. I’m hoping that more and more investors will use their power to champion diversity. Companies need to realize that they should be hiring and promoting more women and people of color because it will make the organization better. The research shows that diversity of thought and diversity of background results in better outcomes.

MATSUI: What’s your advice to the women at Columbia? What do you recommend for young professionals that want to get started in the industry?

MERINO: One of my biggest pieces of advice is to put yourself out there. You have to network. Understand that there might be some setbacks, but those will make you stronger.

Also, seek out a champion within the workplace. Your champion should be someone who is willing to put themselves out there for you. This second part is a call to all men as well. Champion women in your workplace. This problem won’t be solved by women just doing stuff. We need active engagement to make a change.

MATSUI: Relatedly, we’ve been asking everyone in the Solar100 series about racial equity in the solar industry. When you look at the industry, do you think there are firms or industries that are doing a good job addressing racial equity?

MERINO: Honestly, none come to mind immediately. That should tell you something about what is (or isn’t) happening in the industry.

This really goes back to broader societal issues. I don’t want to whittle it down to broad societal issues that we can’t fix. People need to check their privileges, understand the issues, and bring the next person up. Some of this might make people uncomfortable, but it’s something that we need to address.