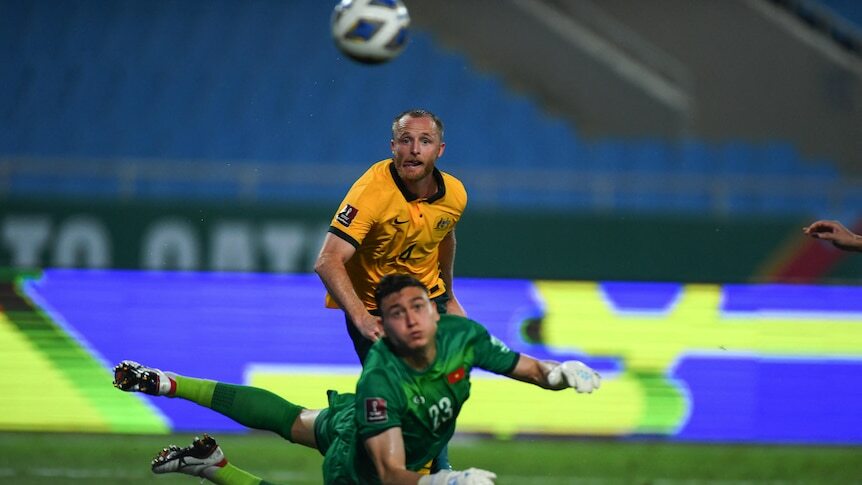 Full-back Rhyan Grant's first goal for his country has secured the Socceroos a hard-fought 1-0 World Cup qualifying win over Vietnam.

On a hot and humid Tuesday evening at the My Dinh National Stadium in Hanoi, Grant's headed finish just before half-time was enough to extend Australia's winning streak to 10 matches.

With an organised and resolute Vietnam providing stiff resistance, Australia huffed and puffed for large parts of the first half without creating a clear chance.

Just when it appeared the teams would go into the break level, however, Adjin Hrustic's curled cross to the back post in the 43rd minute was allowed to bounce in the box before Grant headed past Dang Van Lam.

Hrustic was arguably Australia's most influential attacking player despite the presence of Celtic star Tom Rogic, with in-form winger Martin Boyle not selected due to the hamstring niggle picked up in Friday's 3-0 win over China in Qatar.

Grant had earlier endured a nervous couple of minutes after a shot by Nguyen Phong Hong Duy hit his right arm.

Referee Abdulrahman Al Jassim went to the sidelines to view replays of the incident on the monitor but much to Australia's relief decided to uphold his original decision of no penalty against Grant.

That was one of several nervy moments for Graham Arnold's men against the Group B minnows, who ended the match with more shots than Australia despite the Socceroos having over 70 per cent possession.

Second-half substitute Mitch Duke thought he'd wrapped up the win with a tidy finish in the dying minutes but his strike was ruled out for offside.

It was the second time an Australian goal was chalked off, with Adam Taggart bundling home an effort in the first half which was called back with Brad Smith unable to keep the ball in play before he cut it back across the six-yard box.

The win, coupled with the victory over China, means Australia have two wins from their opening two matches in the third stage of qualifying.

Vietnam are still waiting for their first point in their first appearance at this stage of qualification having been defeated 3-1 by Saudi Arabia in Riyadh in their opening fixture.

Australia's next fixtures will be against Oman and old rivals Japan in October with Football Australia pushing to have the game against Oman played in Sydney in what would be the Socceroos' first home fixture since 2019.

Look back at the action in our live blog.

So that is that! Australia has won 10 consecutive matches under Graham Arnold now and the Socceroos have started this latest phase of qualifying in the best way possible - six points from two games.

Look, it wasn't a classic. It won't be one to bust out of the archives on a rainy day. But the Socceroos completed a professional and mostly comfortable win in tough conditions, and against a tricky opponent. Still a long way from their best, the Aussies will need to be better in their next lot of fixtures against Oman and especially Japan, but tonight they had more than enough for the win.

The goal came from Rhyan Grant - his first for the Socceroos - just before half-time. In the second half, the Aussies were happy to keep the ball and keep things steady. They were rarely threatened as a result.

So that's it for the blog! As mentioned, we've got more qualifiers coming up in October against Oman and Japan so be sure to join us again then. For now, thanks for hanging out and goodnight!

93': Nearly a late chance for Vietnam

I say nearly, Ha Duc Chinh tried a sliding, first time half-volley from an acute angle from a ball that dropped over his shoulder. Degree of difficulty a million. It didn't go close.

90': Mabil misses a chance to seal it

Wonderful play by Rogic in the build up, evading a tackler and lofting a perfect ball over to Mabil. But unfortunately the forward's touch was terrible, and the moment to shoot was gone. Hasn't been Awer Mabil's greatest game, this one.

... but he was offside! It came a play or two after the corner, but when the tackle went in and the ball deflected to Duke, he was clearly offside.

It came after Australia held possession for at least five minutes and god knows how many passes. Will they send the centre-backs up for it? Looks like they will.

Mat Ryan came miles out of his goal to try to intercept a pass through, but he made a meal of it and was left scrambling to get back to his goal as Vietnam won the ball. Australia's defence managed to see the danger away, and the subsequent corner came to nothing. Unneccesary drama though.

The pace has really been sucked out of this game. No doubt the heat is playing a part in that, but the Aussies in particular are in no great rush.

A 1-0 win would be more than enough for the Socceroos. That certainly seems to be the target right now.

68': Jackson Irvine gets a talking to

The Vietnamese coaches were all off the bench screaming at the ref after that Irvine tackle, but the ref wasn't having it. A little chat to Irvine, asking him nicely not to dive in from behind like that again, and we're back on our way.

And his luck is not in. His shot from the edge of the box balloons over the bar.

Another sub incoming for Australia, it's Adam Taggart off for Mitch Duke.

Comfortably held by Mat Ryan in goal, but there was some whip and dip on that long-range strike from Van Duc.

The chance came after Sainsbury gave away possession in midfield. Australia's sloppiness the only thing looking like hurting them at the moment.

Hard to see exactly what happened to him there, maybe he had his foot trod on? Think it was an accident regardless, but the winger is getting some treatment for now.

Aaron Mooy is coming on for Riley McGree, and Aziz Behich on for Brad Smith. Interesting to see what sort of impact Mooy could have on this game.

Another really fast transition from end to end, but again the Aussies have just enough to get in the way.

Vietnam have a corner though...

It's headed miles over the bar and out for a goal kick.

Ugly game. Just need to bank the three points here and move on.

No changes for the Socceroos at the break, with the score 1-0 in Australia's favour.

So not a classic half of football all told, but it ends with the Socceroos in front thanks to Rhyan Grant's late opener.

It's set up for an interesting second half now, with Vietnam obliged to try to make more of the play and fatigue set to play a serious part. With the likes of Aaron Mooy and Daniel Arzani on the bench, Australia has the sort of players who could take advantage of that sort of situation late. But Vietnam showed enough in that half to have Graham Arnold concerned - some of the hosts' counter-attacks were sharp and cutting.

So far so good for Australia, but work still to be done in Hanoi.

Well there you go! Time seemed to stand still for a moment as Hrustic floated a curled cross to the back post, bouncing in front of Grant and hovering beautifully in front of him. He put his now mulletless bonce through the ball, sent it across the keeper and into the back of the net.

Australia leads 1-0 on the stroke of half-time thanks to Rhyan Grant's first goal for his country.

41': I think the heat might be getting to them

The quality of this game has fallen off a cliff in the last 10-15 minutes. It's been really sloppy from both teams in this last period, and not in the end-to-end, chances-aplenty way.

Still time for Australia to make a mark before half-time.

37': Again nothing from the corner

Australia recycled the ball around the area trying to find an opening, before a foul was conceded by Souttar and the attack ended.