Smriti Irani visits Manipur ahead of Assembly polls in the State 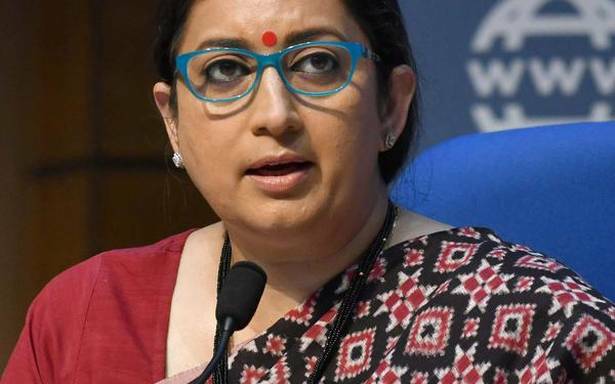 Major political parties in Manipur have started preparing for the Assembly elections scheduled sometime in March next year. All of them are planning to win majority in the 60 member House or at least play a pivotal role in the Ministry formation.

As a part of this plan, national leaders have started coming to Manipur to do the spade works. Smitri Irani, the Union Minister of Women and Child Development, arrived on Saturday on a two-day visit. During her stay, she would attend the Poshan Maah in Imphal. The function is organised by the Social Welfare Department, Manipur. She would also interact with Anganwadi workers and helpers whom she would distribute medicinal plants. She is also scheduled to meet the Chief Minister N. Biren to talk on various issues.

The national president of the National People’s Party (NPP) and Chief Minister of Meghalaya, Conard K. Sangma, is also visiting Manipur with an eye on the forthcoming Assembly polls. In the March 2017 polls, the NPP had bagged four seats. All the four NPP MLAs supported the BJP in forming the coalition Ministry. Mr. Biren in turn made them all Cabinet Ministers. However, the four Naga People’s Front (NPF) MLAs who had extended support to Mr. Biren were not amused since just two of them were made Ministers.

In a later development, all four NPP MLAs were dropped. Later due to pressure two of them were made Cabinet Ministers. However, the Deputy Chief Minister, Y. Joykumar, who was inducted again, was given just one insignificant portfolio of Civil Aviation. Some time later, Finance Ministry was restored to him.

L. Jayentakumar, former Education and Health Minister representing the NPP, said, “There shall be no pre-poll alliance with any party. Our party shall play a major role in the formation of the next Ministry”.

A. Sharda, the BJP State president said, “The vision of S. Tiken, the late BJP president was to win 45 seats in the next elections in the 60 member House. It shall be the endeavour of the BJP leaders to realise his dream, even going to the extent of winning 45 seats”. She added that all level the BJP workers shall work hard to win absolute majority in the next elections. In the 2017 polls, BJP had won 21 seats.

The Manipur People’s Party (MPP) which had formed Ministries in the past has been in a quandary as a result of infighting. Apart from legal battles, the opposing factions had gone too far and the district authority had to clamp prohibitory orders. Now, the MPP leaders say that they will contest some seats. Other small parties have also started preparations to contest some seats. Party sources said some national leaders of these small parties are scheduled to visit Manipur soon.

The CJP leader and former Chief Minister, Okram Ibobi, said, “The Congress shall win majority in the next elections. Last time Governor (now retired) Najma Heptulla refused to give me a chance to form an alternative Ministry despite the fact that Congress had emerged as the single largest party by winning 28 seats. Voters in Manipur are not fools and they are wise enough to elect the politicians who deliver the goods”.