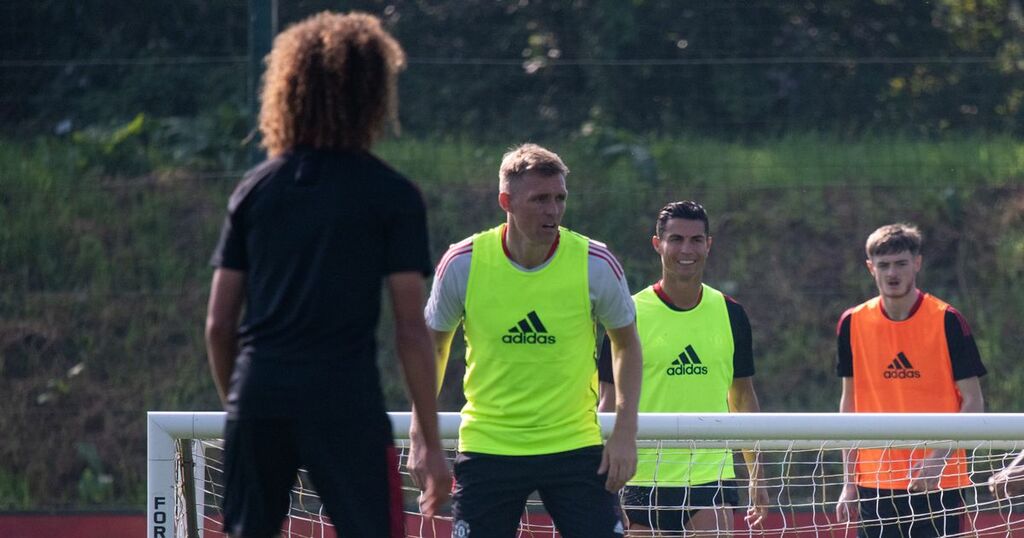 Cristiano Ronaldo took part in his first training session since his sensational return to Manchester United on Tuesday.

In a remarkable final week of the transfer window, United managed to bring Ronaldo back to the club from Juventus just when it appeared as though he was joining cross-town rivals Manchester City.

Instead, following words with Sir Alex Ferguson and various United legends, Ronaldo decided to return to Old Trafford 12 years on from his departure to Real Madrid.

Now the 36-year-old will be hoping to make his second debut for the club against Newcastle United on Saturday and he has been gearing up for the match in his first training session back at the club.

Ronaldo has arrived at Carrington ahead of schedule after leaving the Portugal squad early due to suspension and United released video footage and photographs of the session.

Here are six things we spotted:

Tuesday was a glorious summer day in Manchester and it reflected the mood in the camp.

Though Ronaldo will have to wait to meet up with the rest of his teammates who remain on international duty, he was full of smiles throughout the session and looked in great spirits upon his return to Carrington.

Ronaldo entered the field with veteran Juan Mata and was also snapped sharing a joke with his fellow Portuguese speakers Fred and Diogo Dalot.

Though Ronaldo is in brilliant condition, having scored twice in his country's victory over the Republic of Ireland last week, he largely trained on his own in his first session.

The forward jogged laps around the pitch and joined in with some light rondo games with his new teammates - as well as a former one in technical director Darren Fletcher, who helped make up the numbers - but he then split from the main group to do some individual training.

While the rest of the players took part in some small-sided games, Ronaldo conducted some basic pass-and-move drills as he eased his way back into life in Manchester.

One player who did take part in the full session with the group is Jadon Sancho, who made his return to training after suffering a minor injury.

The winger picked up a knock while training with the England national side on Thursday, a blow that saw him ruled out of the victory over Hungary and subsequently withdraw from the squad over the weekend and miss the final two games of the break as a result.

However, the injury was not thought to be serious and that has proved to be correct, with Sancho returning to action on Tuesday and expected to be involved at the weekend.

During the matches, young playmaker Hannibal Mejbri showed exactly why there are such high hopes for his future with a dazzling move.

After picking up the ball in his own box he sauntered forward towards Fred and effortlessly knocked the ball between his feet to evade the Brazilian. He then laid it off to Donny van de Beek before receiving it back and again sending Fred to the cleaners with a delightful turn to race goalwards.

Sadly his finish wasn't quite as good, as he hit the ball straight at Tom Heaton. But it's easy to see why there is so much excitement about the 18-year-old.

5 - But Ronaldo's still the skill master

Ronaldo might not rely on his bag of tricks as he used to in his first stint at United, but he can certainly pull them out at will to remind everyone just how talented he is.

In a gap between drills, the five-time Ballon d'Or winner casually strolled up to a ball and then without a care in the world flicked it into the air and kept it there with a touch of the heel before bringing it back down again.

The roar from fans when he first pulls out a trick at Old Trafford will be something for the ages.

United were unable to bring in Kieran Trippier this summer to bolster their options at right-back and instead had to keep Diogo Dalot as back-up to Aaron Wan-Bissaka.

The Portuguese has struggled for regular minutes at the club since his move from Porto but impressed on loan at AC Milan last season and looks determined to fight for his place in Ole Gunnar Solskjaer's plans.

He did his chances no harm in the training session, in which he showed some strong pace and smart defending by matching the rapid Mason Greenwood stride for stride before landing an inch-perfect tackle to deny a shot on goal.

If Dalot continues to perform like that in training he may earn himself a chance this season.