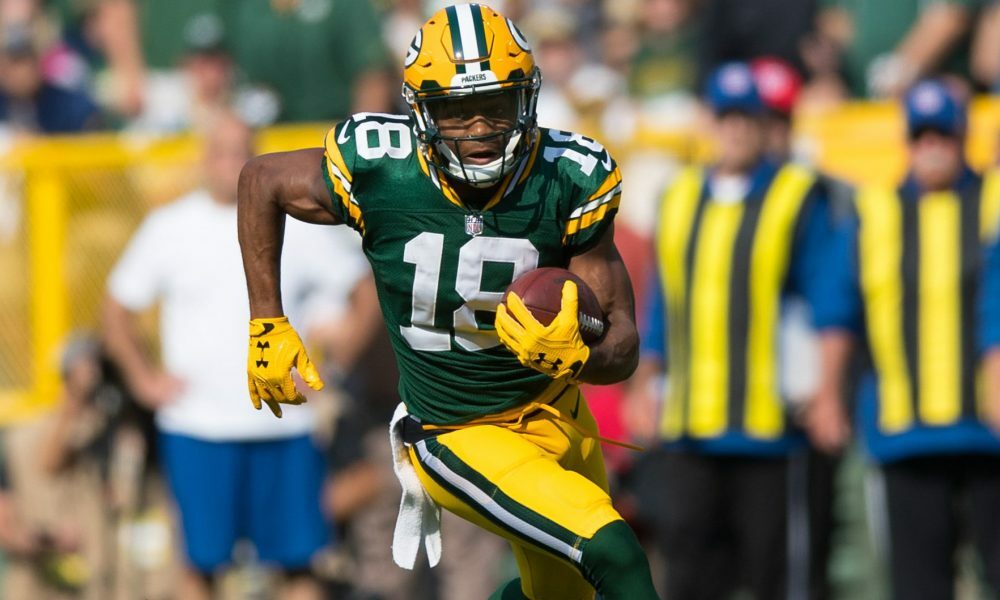 Bloody Week 4 is in the books and the Panthers, Raiders, and Broncos all lost their first game, and now the Cardinals are the only unbeaten team left in the NFL.  The Giants, Colts,  and Jets also won for their first times, leaving only the Jaguars and Lions as winless teams.

One month into the season, I’ll say it again – the good teams  are not that good, and the bad teams are not that bad. Divisions are still bunched up in standings after only one month, but more separation will happen.  If there is any positive adding an additional game, it is that when the season is over, there are only winning and losing records – no .500 teams with 17 games.

We have a London game that goes off at 9:30 AM (EST), and that’s 6:30 AM on a Sunday morning on the West Coast. Those games rarely happen as expected, and one team plays much worse than usual. The Falcons have no starting wide receivers, so that  won’t help. But for Week 5 in the NFL, here are six items I’m watching on Sunday.

1.) WR Randall Cobb (GB) – The Packers need a receiver other than Davante Adams, and last year, that was mostly Robert Tonyan. But the tight end hasn’t been a factor in three of four games with minimal yardage and no scores. Cobb scored twice last week on his five receptions for 69 yards in the win over the Steelers. That likely has him scraped off nearly every waiver wire out there, but one game doesn’t mean much, considering he only had four catches for 58 yards from the previous three games combined.

What was encouraging is that he received a season-high six targets. Only Marquez Valdez Scantling fielded more than six targets in any game, and he is on injured reserve. The Packers play the next two weeks on the road at the Bengals and Bears. I want to see if the Packers’ receivers will do anything in the wake of losing Valdes-Scantling and never using any other receivers. Even Aaron Jones is only catching two or three passes.

2.) RB Kenneth Gainwell (PHI) – The Eagles change coaches and coordinators but still rely on a committee backfield. So there may never be any major fantasy points from an Eagles’ running back. But through four games, Miles Sanders has seen a declining role while the rookie is doing more. That is partially a function of the game situation, and Gainwell has taken more of a third-down role. But – he’s scored the only two rushing touchdowns and last week caught six passes for 58 yards in the loss to the Chiefs.

Gainwell only started one season in Memphis but ran for 1,459 yards and caught 51 passes for 610 yards and 16 total touchdowns. Then he opted out of 2020 due to COVID concerns. These next two weeks are interesting since he was used extensively as a receiver, and the Eagles will play at the Panthers and the Buccaneers. Both have great run defenses that should hold the Eagles to minimal rushing yards. So Gainwell’s role as a receiver will be needed. If he can outplay Sanders these next two weeks, his role as a rusher may end up increasing as well – all at the expense of Sanders.

3. RB Khalil Herbert (CHI) – David Montgomery was lost for four to five weeks with a hyperextended knee, leaving Williams as the primary runner. With Justin Fields being named as the starting quarterback ongoing, the offense needs help to keep the sticks moving. Williams stepped in last week with eight runs for 55 yards and a score on the Lions and their lowly ranked run defense. He’s a journeyman running back on his  third NFL team but without more than 111 carries in a year at any stop – he’s always been the No. 2 guy.

Herbert ran just three times for seven yards last week for his first action. He was the Bears’ sixth-round pick out of Virginia Tech. Williams was banged up but had a full practice, so he should be the starter against the Raiders this week. But Montgomery is out for the next month or more, and Herbert should see at least incrementally more work.

4. WR Jon Ross, Kadarius Toney (NYG) – Both Sterling Shepard and Darius Slayton were out last week with hamstring injuries and haven’t practiced this week as of Thursday. Both Ross and Toney should see more playing time since they both did so well in Week 4. There’s a growing expectation that they may replace those injured players permanently. Ross (3-77, TD) and Toney (6-78) both contributed to the first win of the season in New Orleans.

Ross is the speed merchant who debuted with a 57-yard touchdown to open the game. Hut his four years at the Bengals were mostly disappointing even though he was a former first-round pick. Toney is the one to watch the most  since he was targeted a team-high nine times to only four for Ross. This week in Dallas should give the duo an excellent chance to repeat their fine performance from Week 4.

5. RB Jeremy McNichol, RB Darrynton Evans (TEN) – Evans was recalled from injured reserve on Wednesday, and his role on Sunday in Jacksonville is worth noting (if he even plays). Jeremy McNichols filled in for Evans but had been limited to no more than three catches as a third-down back. But in Week 4, McNichols led the Titans with eight catches for 74 yards and was thrown 12 targets. The Titans were without their two starting wideouts, so it’s likely just a surprising aberration from a one-game situation.

But it also draws attention to how the Titans drafted Evans in the third round last year for both his rushing and receiving skills. Last year, the Titans threw a total of 34 passes to running backs over 16 games. This year, they’ve already thrown 36 passes to the position over four games. McNichols helped last week, but he just played the role that Evans was drafted to play. Worth watching if Evans is active.

6. TE Kyle Pitts (ATL) – “Generational” is such a big word. But the rookie that was usually the fourth or fifth tight end drafted this summer has hardly delivered on expectations. Pitts had a season-high five catches for 73 yards in Week 2 versus the Buccaneers.  He’s never been better than 50 yards in any other game and still has not logged an NFL touchdown.

He plays in London this week, which could mean anything. But Calvin Ridley and Russell Gage are out, and by now, opponents are figuring out that Cordarrelle Patterson is worth covering. The Falcons need him to step against the Jets, who are likely even more interesting in stopping Patterson since they gave up eight catches for 74 yards to Jeremy McNichol last week. This is Pitts’ chance to be featured. We just have to get up early to watch.