Sisi-Bennett meeting is all about the timing - analysis 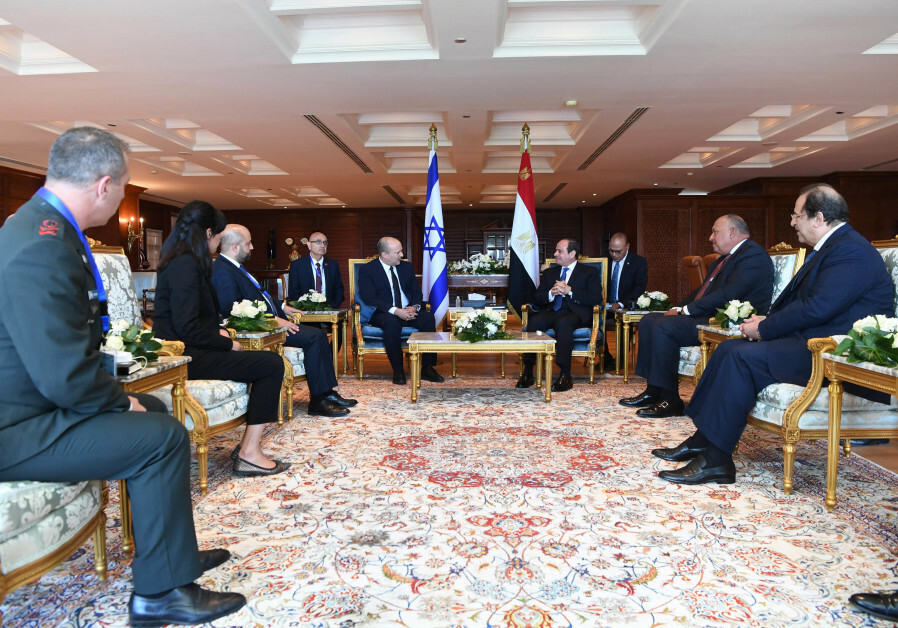 The summit at the Egyptian resort of Sharm El Sheikh on Monday was the first such meeting between Egypt’s and Israel’s top leaders since 2011, a long hiatus that reflected the mistrust between the region’s Arab heads and the longest-ever-serving Israeli prime minister, the recently replaced Binyamin Netanyahu.

But this in no way diminishes the importance of timing in the current context.

Veteran Egyptian and Arab diplomats are likely to have given the issue of timing a lot of thought. The Bennett-Sisi summit took place ahead of the annual United Nations General Assembly in New York and after an important three-way Arab summit in Cairo that included Palestinian President Mahmoud Abbas and Jordan’s King Abdullah.

Prime Minister Naftali Bennett will likely be playing defense in New York as the Arab team, as well as the US, Europe and others, will be playing offense trying to force the right-wing Yamina party leader to depart from his publicly stated position of refusing any diplomatic talks with Palestinians on the globally supported two-state solution.

Unlike his predecessors Netanyahu and Shimon Peres, Bennett is still a novice in regional and world politics, and he will soon understand that what you say publicly will come back to haunt you. In an interview with the New York Times published on August 24, Bennett was probably being honest in expressing his thinking when he publicly ruled

out any talks on Palestinian

sovereignty during his term as prime minister.

Previous Israeli leaders regularly said the opposite, verbally supporting talks while not doing much to make them happen. The late Yitzhak Shamir once said that Israel would talk for 10 years without producing any results, while Peres was famous for quoting an Arab proverb that said there is a blessing in movement.

Egyptian President Abdel Fattah el-Sisi on Monday cornered Bennett by talking about the importance of the two-state solution and the need for direct talks while the Israeli leader was standing alongside him, unable to diplomatically contradict the Egyptian leader while clearly unhappy with what was being said.

Ahmed Deek, the director-general of the Palestinian Ministry of Foreign Affairs, picked up on the Sisi stand by telling The Media Line, “We value the position of Egyptian President Sisi in the Sharm El Sheikh Summit in which he stood up for the Palestinian cause.”

Deek said that this is a reflection of the strong “brotherly unity in favor of peace based on international law and the two-state solution.” He also hailed Egypt for its support of the rebuilding of Gaza after the most recent onslaught, after Cairo succeeded in brokering a cease-fire after 11 days of violence between Palestinians in Gaza and the

Ofer Zalzberg, Middle East program director at the Herbert C. Kelman Institute for Interactive Conflict Transformation in Austria, told The Media Line the Bennett administration places higher priority on relations with Jordan and Egypt than did Netanyahu’s governments, which neglected these immediate neighbors as it shifted the

“The summit signals more cooperative Israeli-Egyptian relations, despite a fundamental disagreement over the desirability of a two-state vision. Potential fruits in the Israeli- Palestinian context are most likely to emerge in the form of coordination of Israeli-Egyptian Gaza stabilization efforts with the PA,” Zalzberg said.

“Sisi is trying to enhance his delicate regional position; he needs to make sure that the Abraham Accords do not trump the Camp David Accords without stepping on the toes of the UAE, who still remain an important economic support for Egypt,” he said.

The Egyptian president “also wants to win favor with the Biden/Democratic administration and try to regain regional clout through the stumbling Gaza reconstruction plan or the exchange of prisoners and bodies of deceased Israeli soldiers, or any other regional initiatives where Israeli support could be useful,” Kassem said.

Hamadeh Hamadeh, a documentary filmmaker in Gaza, told The Media Line that Gazans are beginning to see improvements.

“The price of a ton of cement has gone down by NIS 400 ($125) and as a result, people are starting to notice the change. Also, families whose houses were destroyed by the Israeli shelling have been approached to present their papers so that they can get their homes fixed,” he said.

Hamadeh, who also volunteers to help to rehabilitate released political prisoners, told The Media Line the issue is still explosive and has raised the political temperature in the Strip.

“People are emotional and are concerned about the status of their loved ones in Israeli jails and want to make sure that the issue of Palestinian political prisoners receives priority in such talks,” he said.