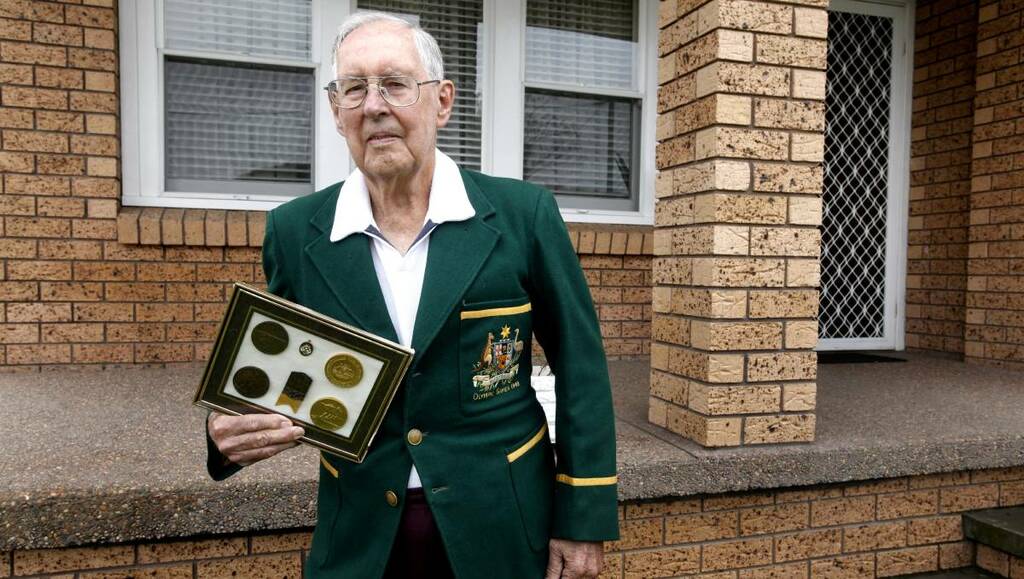 Kevin Hallett, the swimmer from Singleton who raced at the Olympic Games more than seven decades ago, is being remembered as a family man with quiet determination who was a "Hunter Valley boy through and through".

Mr Hallett died on Monday, only two days short of his 92nd birthday.

In his late teens, Kevin Hallett was selected for the Australian swimming team bound for the 1948 London Olympics - the first since the end of World War II.

The Singleton community rallied to raise the 500 pounds required to send the local hero on the four-day plane trip to the other side of the globe to take his place on the world stage.

"It is up to the whole of the Hunter Valley to see that sufficient [money] is available to see that Hallett goes to London," the Singleton Argus said on April 6, 1948.

Despite suffering from tendon problems in both shoulders, Mr Hallett competed bravely in his 220-yard breast stroke heat - but missed out on a place in the final.

He then swam at the 1950 Empire Games - now known as the Commonwealth Games - in Auckland, where he was disqualified for using an illegal kick.

Soon after, he retired from elite competition to work as an accountant in his home town.

Mr Hallett and his wife Glad, who died almost three years ago, lived in Singleton until 2017, when they ventured further into the valley to settle at Scone.

They raised three children, including twins, and had eight grandchildren - another two sets of twins among them.

Mr Hallett's son Bryce told the Newcastle Herald his father had an "inner glow about things" and was "a Hunter Valley boy through and through".

Bryce said it was not in his dad's nature to look back and "dwell on past glories".

"He was an incredibly private man and so was my mum," he said.

"You could see why they were soul mates. He was just unassuming and modest. For all his achievements, he never once made a show of it.

"He was a very smart man, but he never really let on how much he actually knew. My picture of Dad is just someone who was extremely gentle and generous to a fault.

"He was very much a staunch family man and did so much for the community in Singleton."

A small funeral will be held at All Saints Anglican Church at 11am on Monday before a guard of honour forms-up on the street outside.

Mr Hallett was inducted into the Hunter Academy of Sport's Hall of Fame and was made a life member of Singleton Swimming Club in 1986.

Even into his twilight years, his love of the water never left.

"He just had to look at a swimming pool and there was just something that would come alive," Bryce said.

During the Tokyo Olympics earlier this year, Bryce said his dad rarely left the armchair - he was particularly "overjoyed" by the Australian team's medal haul in the pool.

The day the Games started, Mr Hallett received a gold embossed letter in the mail - it was his copy of the Australian Olympians' Oath.

"It ends with the line 'once an Olympian, always an Olympian'," Bryce said.

"That connection, for him, was right there until the end."